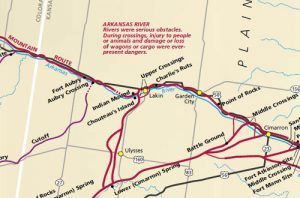 Mountain Branch of the Santa Fe Trail in Kansas

The Mountain Branch of the Santa Fe Trail continued to follow the Arkansas River all the way into Colorado. This route passed through Gray, Finney, Kearny and Hamilton Counties of Kansas, before moving into Colorado. Though the route was farther than the Cimarron Cutoff, it had continuing access to water and was not as prone to Indian attacks as the shorter route through the southwest corner of Kansas and the Oklahoma panhandle. 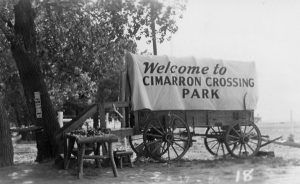 Wagons were able to cross the Arkansas River virtually anywhere in this region due to its shallow flows. The Middle Crossings were the scenes of numerous Indian attacks during the Trail era.

The trail passed through the present-day city of Cimarron, Kansas where the trail provided another branch to the shorter Cimarron Route to Santa Fe. Here, was another popular crossing of the Arkansas River, as well as several more on the path to Ingalls, Kansas. A marker designates this crossing in Cimarron Crossing Park about 1/2 mile south of Cimarron, Kansas on K-23.

The Mountain Branch of the trail continued westward following the Arkansas River, near present-day US Highway 50 on to Ingalls, where there was another crossing of the river.