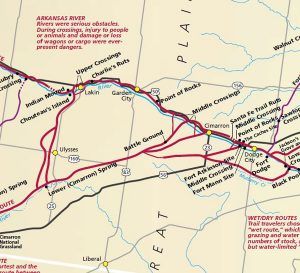 Mountain Branch of the Santa Fe Trail in Kansas

The historic Mountain Route of the Santa Fe Trail made its way from Gray County into present-day Finney County, Kansas making its way passing by the old townsite of Pierceville about 12 miles east of Garden City. This old townsite was once the headquarters for a ranch that was destroyed by fire during an Indian Raid in 1874.

About 2 ½ miles northwest west of Pierceville was another Point of Rocks landmark. It is situated on the north side of Mansfield Road which parallels the Arkansas River and the Santa Fe Railway tracks.

Finney County Point of Rocks is one of at least four similarly named sites along the Santa Fe Trail that aided travelers in their navigation of the road. The trail passed to the immediate south of this formation.

The natural feature retains a good degree of integrity, sitting within an area of mostly featureless plains that covers most of the western quarter of the state. Here once sat a place known as Pawnee Forts that were described by Lewis Gerrard, who, in 1846 at the age of 17, joined a caravan to Santa Fe, New Mexico the Mountain Route.

According to Gerrard, his party passed Pawnee Forts, a grove of timber in which a war party of Pawnee Indians had fortified themselves when besieged by a hostile tribe some years before. On July 22, 1846, Colonel Stephen Watts Kearny and the Army of the West passed ‘”Pawnee Fort, an old decayed stockade”‘ after camping near the Caches in Ford County. 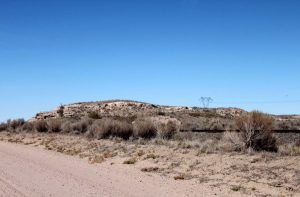 “We were on our road at the usual time this morning. Nothing occurred of any account. It is clear and pleasant. Found road very good except some sandy hills. Came to Pawney [sic] fort about 3 o’clock p.m. Saw up under the shelving rocks [Point of Rocks] where an Indian had been buried and had been dug up by the Wolves.”

William Salisbury, a young gold-seeker from Ohio, diary entry May 28, 1859

In the late 1860s, the Kansas Pacific Railroad approached the Colorado state line, truncating the length of the wagon route to Santa Fe. The Barlow & Sanderson Stage Company continued to use this truncated route of the trail from 1866 to June 1868. When the railroad reached the short-lived city of Sheridan, Kansas near Fort Wallace in June 1868, the eastern terminus of the trail shifted to this area approximately 100 miles north-northwest of Point of Rocks. That portion of the trail east of Sheridan was subsequently abandoned. By March 1870 the railroad had reached Kit Carson, Colorado, spelling the end of trail traffic along the Santa Fe Trail through this area.

From Point of Rocks, the trail then continued through the present-day towns of Garden City and Holcomb before making its way into Kearny County.