A Giant Concrete Teepee stands along the south side of US-40 in Lawrence, Kansas, but why?

This place was once the site of the “Indian Village” that included a gas station, cabins, and a a restaurant, and dance room that were all designed with a “teepee” themed architecture.

Established in 1930, this was a time when many businesses worked hard at attracting passing motorists by creating a unique image that included fanciful names, signage and graphics that spoke to a theme, and specific architectural details. 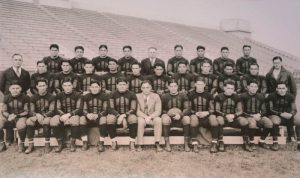 Frank McDonald in front-center with the Haskell Institute football team, 1926.

The Indian Village was the brainchild of Frank McDonald who was the athletic director at the Haskell Indian Institute in Lawrence. In the 1920s, McDonald purchased a strategic ten-acre tract at the planned intersection of an east-west road that would link Kansas City and Topeka, and a road leading north out of Lawrence. His plan was to build Lawrence’s first motel at the intersection. Soon, the east-west road was designated as US 40 and the Lawrence road became US 73W (later US 59).

“I had always intended to enter the business world and be my own boss.” – Frank McDonald, 1928

In 1929 McDonald convinced the Sinclair Oil Company to build a series of transcontinental filling stations with Native American imagery across the west, each located about a day’s travel from each other near Indian reservations and staffed with Native Americans. The first was to be in Lawrence. 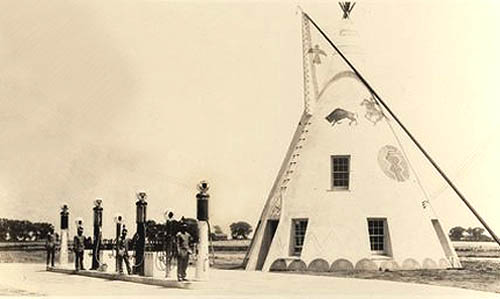 His plan for the Indian Village was to include a 40-foot high teepee with a filling station at its 25-foot base. The wooden structure was to have a concrete exterior, and house restrooms, a men’s smoking room, and a second-floor apartment that would serve as living quarters for an on-site filling station operator. McDonald applied for a patent on this design which was granted in 1930. The complex was to also include a restaurant, and motor court comprised of 14 teepee cabins, and a hogan was to be built for restrooms and a bathhouse.

When the first building that would house the gas station was built, it was slightly different from its original plans. This centerpiece concrete teepee was actually bigger than the plans at 50 feet tall and 33 feet in diameter. But, McDonald was forced to scale back on his original plans due to the nation entering the early struggles of the Great Depression. Unfortunately, the station would not open selling Sinclair gas, as they pulled out of the agreement for a partnership, dashing McDonald’s dream of a nationwide chain. Instead, the filling station would provide Conoco gasoline. 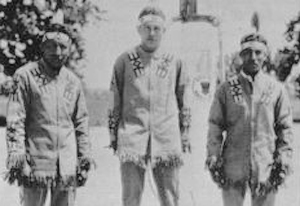 Students from the Haskell Institute staffed the Indian Village in the summer of 1930.

By 1930, the gas station was ready for customers and publicity prior to its opening stated that Native Americans had designed the main teepee, would staff the filling station wearing tribal costumes, and provide tourist information with an emphasis on their culture and their reservations. The service station teepee opened on May 30, 1930, to much fanfare including barbecued buffalo and “genuine Indian curios” given away to each customer that included beadwork, feathers, and tom-toms made by Indian families of Haskell students.

The next day. McDonald placed a thank you in the newspaper to all who had attended the opening and would later state that the business served 10,000 customers in the first 10 days. 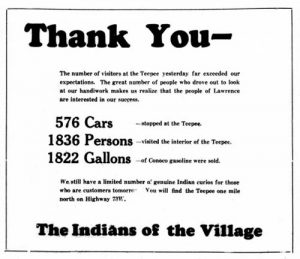 Indian Village Thank You in the newspaper after Grand Opening.

In August 1930 the complex was expanded with the opening of a barbeque restaurant and curio shop that was housed in a building featuring teepees at each corner of the building. All types of Indian souvenirs were available for purchase including Indian blankets, beads, and other curios. By the following spring, two or three teepee cabins were available for lodging. As many as six to eight teepees are thought to have been available at the tourist court at some point. However, Native Americans would no longer staff the complex after the first summer and the costumes were also dropped.

Responding to the publicity generated by the Kansas Indian Village, as many as 22 other businesses from Massachusetts to California used “teepee” architecture to attract the traveling public.

In 1932, Prohibition was about to end and in 1933 McDonald secured what he claimed to be the first beer distributorship in Kansas. (He and his descendants would own the Anheuser-Busch distributorship in Lawrence until 1999.) That same year he resigned from Haskell Institute. In 1935, he added a beer garden and dance hall between the barbecue restaurant and gas station which opened to the public on August 10, 1933.

In June 1935, a flood wiped out three teepee rentals that were on the property, and in 1938, the restaurant suffered a fire in the back of the building which took out the southwest and southeast teepee corners. However, afterward, the building was expanded and continued to operate. 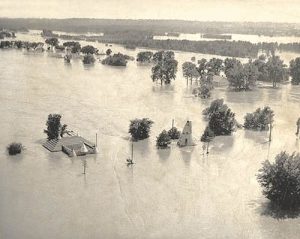 The Lawrence flood of 1935 left the teepee cabins completely underwater and almost reached the top of the restaurant. 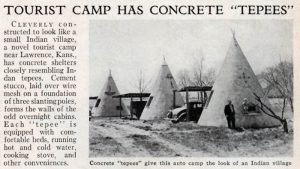 A 1936 newspaper clip shows that at least three of the teepee cabins survived the flood.

In the meantime, Franck McDonald became an important leader in Douglas County and state Democratic politics. Ironically, he chaired the Kansas Turnpike Authority which would bypass the Indian Village and take away traffic from Highway 40.

In 1951, a massive flood inundated Lawrence leaving the Indian Village underwater again. This time, the waters almost covered the lower half of the large teepee, probably covered the entire restaurant, and once again the remaining teepee cabins were completely underwater. However, once the water receded and clean up was completed, both it and the gas station reopened. The teepee cabins no longer exist, leading one to wonder if this second flood destroyed them beyond repair.

At about that time, the spot was no longer called the Indian Village and was more familiarly known as “Teepee Junction.” McDonald continued to manage the property until 1958. 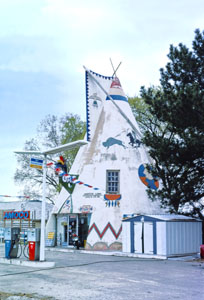 The Lawrence Teepee Gas Station was still open in 1977 by John Margolies. 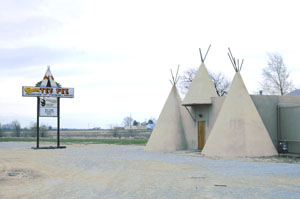 The old Teepee restaurant in Lawrence was operating as an event venue in 1977 by John Margolies.

In 1977, the gas station was still colorfully painted and operated as an Amoco Station, and its iconic Indian sign was still lit up with neon. Its sister property, which once served as a restaurant, was painted a drab-colored tan and its colorful paintings were gone. However, it did continue to feature a conical half-tepee above its door, which no longer exists today. It appeared, at this time, that the building had already become an event venue, but its sign, as it continues to display today, advertised “Purveyors of Potables and Edibles.” Unfortunately, we have been unable to determine what this statement referred to. 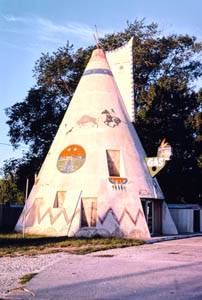 Sometime later, the gas pumps were removed, and in 1979, the teepee briefly took on a new life as a place for art pottery. At that time, recently retired University of Kansas ceramics professor Bill Bracker, and his wife Anne, rented the space from the McDonald family so that they could construct a powerful kiln and open a storefront to sell their pottery.

In 1980, the windows were boarded up but the building still featured its iconic Indian gas sign, though sometime afterward it was removed.

The art pottery business grew too big for the building and by 1985 it moved to a nearby warehouse. However, Barbara McDonald continued using the building as a private pottery studio for several more years.

In 2008, the buildings were restored and repainted with Native American imagery. Two lines were painted on the teepee to mark the floodwaters of 1935 and 1951.

Today the large Teepee appears to serve as a private residence while the old restaurant building to the east continues to serve as an event space that is a popular spot for fraternity and sorority parties. 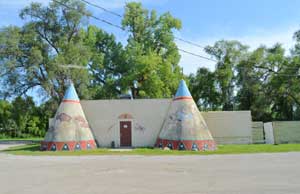 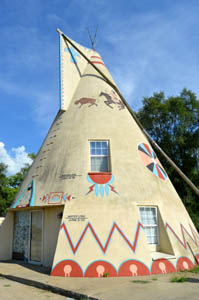 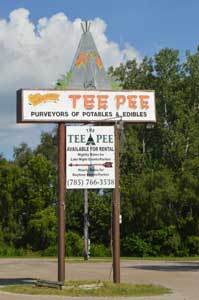