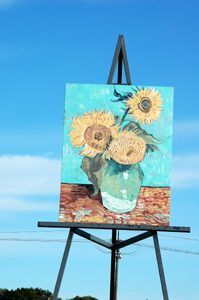 Though Vincent Van Gogh never heard of Goodland, Kansas, the folks of Goodland certainly know of him, thanks to Canadian artist Cameron Cross. While driving to Goodland, visitors will see acres and acres of sunflowers surrounding the town, but the biggest one of all sits at the junction of U.S. Highway 24 and State Highway 27 atop an 80-foot easel.

The 24 by 32-foot reproduction of Vincent Van Gogh’s Sunflowers, can be seen from nearby I-70, but to truly appreciate its “big picture” effect, a side trip into town is a “must make.”

The third in a series of seven giant Van Gogh reproductions planned by Cross, the Sunflowers are part of the Big Easel Project, which will display Van Gough’s Sunflower Paintings in seven different countries around the world.

The first Easel was erected in Altona, Canada in October 1998, the second on in November 1999 in Emerald, Australia, and Goodland’s giant painting on August 17, 2001. Discussions are currently underway in South Africa and Japan for future sites and when it is final, it is expected to be included in the Guinness Book of World Records.

What all seven sites, ranging from rural to urban, will have in common is that all have a connection to sunflower agriculture or to Van Gogh himself.

Goodland, now known as the “Sunflower Capital of the High Plains,” will be the only place in the United States where one of the giant easels and its sunflower painting can be seen.

On display at what is known as the “Cherry Street Y,” plans call for a visitor’s center that will include a public viewing area and an exhibition hall dedicated to the history of sunflowers and Van Gogh.

Goodland, Kansas is located on Interstate I-70, just 17 miles from the Colorado border.

Legends of Kansas — Kansas In Depth