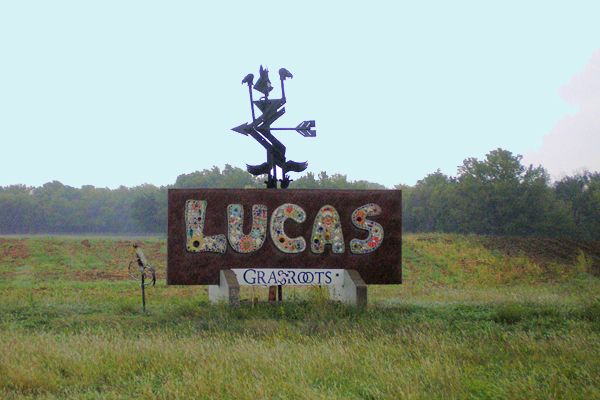 In central Kansas, just 15 miles north of I-70, sits the tiny town of Lucas. Though the town has less than 500 residents, it was officially designated as the “Grassroots Art Capital of Kansas” by the governor in 1996.

While there are several grassroots art sites in this small town, the most famous is the Garden of Eden.

Built by Samuel Perry Dinsmoor, a retired schoolteacher, Civil War Veteran, and Populist politician, Dinsmoor moved to Lucas in 1891 and settled on a farm outside of town with his wife. 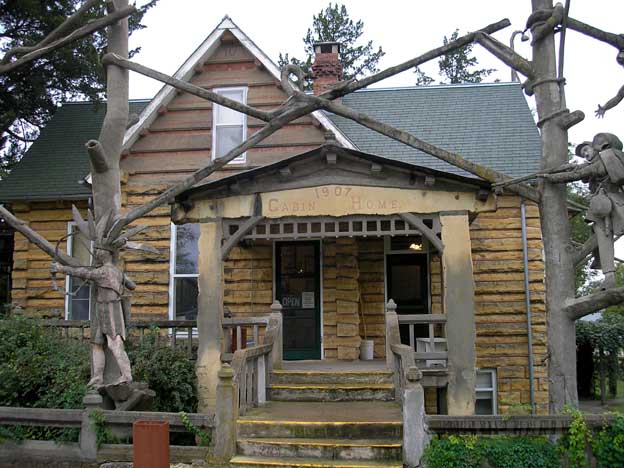 However, in 1905, at the age of 62, Dinsmoor bought property in town and set about building his “creation.” The first task at hand was the construction of a “log cabin,” which wasn’t made of logs at all; rather, the 27-foot timbers were carved from limestone. Due to his extreme distrust in banks, the artist also built much of his own furniture, including a desk where he kept his money. 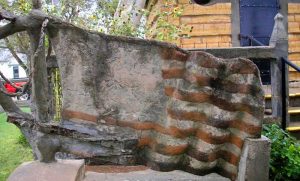 Flag Sculpture at the Garden of Eden by Kathy Alexander.

In no time, passersby were stopping to look at the unusual house, which Dinsmoor called “the most unique home for living or dead on Earth.” Completed in 1907, the eccentric artist began to give tours of the house the following year.

For the next 22 years, Dinsmoor continuously labored to build his unique “Eden” by adding 150 different sculptures, representing his interpretation of the world’s creation, history, and personal views of political goings-on. Utilizing 113 tons of concrete over the years, the eccentric artist created mammoth insects, angels with massive wingspans, 40-foot tall trees, frolicking children, numerous political messages, and even a waving concrete American flag.

Lifesize statues of Adam and Eve welcomed visitors to his home, with Eve offering visitors an apple. However, the original sculptures shocked the townspeople as they portrayed their “natural state,” the town leaders soon forced the artist to cover their “privates” with concrete loincloths. 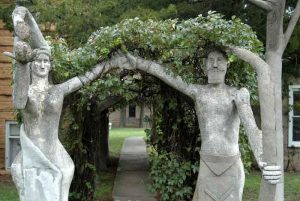 An “all-seeing-eye-of-God” was hung from a branch on the “tree of life.” The “eye” included a hose that ran from the house’s basement so that Dinsmoor could shout at passersby, pretending to be God speaking to them. The first to have electricity in the town, Dinsmoor wasted no time wiring his sculptures so that they could be lit up at night.

Dinsmoor even created his own 40-foot high pagoda-style stone and concrete mausoleum for himself and his wife. However, when his wife died, the town insisted that she be interred in the cemetery rather than the mausoleum. Though Dinsmoor initially complied, he later dug up her coffin and placed it in a steel-reinforced crypt in the mausoleum so that she couldn’t be moved.

Shortly after Dinsmoor’s first wife died, the artist married his 20-year old housekeeper in 1924. Eighty-one years old and still going strong, the pair had two children. For his new bride, he built a sculpture of his face, just outside the kitchen window, so that she would see him waving at her every day. 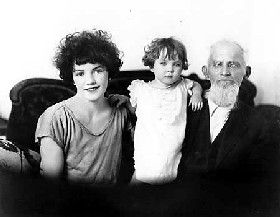 Samuel Dinsmoor with his 20-year old wife and child

Up until just a few years before his death in 1932, Dinsmoor continued to provide tours of his home and garden to the many curious people who stopped by for a look. He even created a tour book for the property.

When the artist died at the age of 89, he left instructions to be mummified like an Egyptian and placed in a glass-topped coffin in the mausoleum. He continues to rest there today and can still be viewed by visitors.

Today, the Garden of Eden is listed on the National Register of Historic Places and welcomes some 10,000 visitors a year. The site is owned and operated by a preservation group. 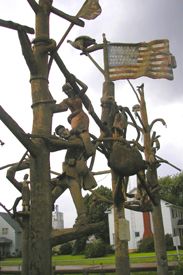 This is just one of the many sculptures at the Garden of Eden in Lucas, Kansas, Kathy Alexander.