Having murdered his brother-in-law, Orrin Brower of Kentucky was a fugitive from justice. From the county jail where he had been confined to await his trial, he had escaped by knocking down his jailer with an iron bar, robbing him of his keys, opening the outer door, and walking out into the night. The jailer being unarmed, Brower got no weapon to defend his recovered liberty. As soon as he was out of the town, he had the folly to enter a forest; this was many years ago when that region was wilder than it is now.

The night was pretty dark, with neither moon nor stars visible, and as Brower had never dwelt thereabout and knew nothing of the lay of the land, he was, naturally, not long in losing himself.

He could not have said if he were getting farther away from the town or going back to it–a most important matter to Orrin Brower. He knew that in either case, a posse of citizens with a pack of bloodhounds would soon be on his track and his chance of escape was very slender, but he did not wish to assist in his own pursuit. Even an added hour of freedom was worth having. 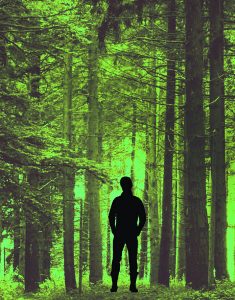 Suddenly he emerged from the forest into an old road, and there before him, he saw, indistinctly, the figure of a man, motionless in the gloom. It was too late to retreat: the fugitive felt that at the first movement back toward the woods, he would be, as he afterward explained, “filled with buckshot.” So the two stood there like trees, Brower nearly suffocated by the activity of his own heart; the other — the emotions of the other are not recorded.

A moment later — it may have been an hour — the moon sailed into a patch of unclouded sky, and the hunted man saw that visible embodiment of Law lift an arm and point significantly toward and beyond him. He understood. Turning his back to his captor, he walked submissively away in the direction indicated, looking to neither the right nor the left, hardly daring to breathe, his head and back actually aching with a prophecy of buckshot.

Brower was as courageous a criminal as ever lived to be hanged; that was shown by the conditions of awful personal peril in which he had coolly killed his brother-in-law. It is needless to relate them here; they came out at his trial, and the revelation of his calmness in confronting them came near to saving his neck. But what would you have?–when a brave man is beaten, he submits.

So they pursued their journey jailward along the old road through the woods. Only once did Brower venture a turn of the head: just once, when he was in deep shadow and he knew that the other was in the moonlight, he looked backward. His captor was Burton Duff, the jailer, as white as death and bearing upon his brow the livid mark of the iron bar. Orrin Brower had no further curiosity.

Eventually, they entered the town, which was all alight, but deserted; only the women and children remained, and they were off the streets. Straight toward the jail the criminal held his way. Straight up to the main entrance, he walked, laid his hand upon the knob of the heavy iron door, pushed it open without command, entered and found himself in the presence of a half-dozen armed men. Then he turned. Nobody else entered.

On a table in the corridor lay the dead body of Burton Duff.

Excerpted from the book Present at a Hanging and Other Ghost Stories, by Ambrose Bierce, 1913. Ambrose Bierce was the author of several supernatural stories and tales of the Civil War, which he drew from his own experience as a Union cartographer and officer.  Bierce was a journalist and editor for the San Francisco News-Letter and California Advertiser. In 1913, at the age of 71, Bierce disappeared into revolution-torn Mexico to fight alongside the bandit Pancho Villa. Although a popular theory is that Bierce argued with Villa over military strategy and was subsequently shot, he probably perished in the battle of Ojinaga on January 11, 1914.