First, let me say that I am a 29 year-old-male from Kentucky and a skeptic when it comes to ghosts. I believe that there must be a logical explanation for everything, though it may be a logic that we do not currently understand. If asked about U.F.O.s, I would have to say that though again skeptical, I feel the possibility is far greater than that of spirits of the dead walking among us. The reason I mention this is that this story falls somewhere between U.F.O.s and ghosts. I want to assure you that, as God is my witness, this is a true story. It has recently been on my mind and really scares me yet today.

My story begins late one evening in mid-summer about 15 years ago. At that time, I had a very strange habit: I was absolutely obsessed with throwing rocks. I would spend hours engaging in my hobby, particularly at a spot about 60 yards up the hill behind my house where there were many rocks.

Because the summer days were getting very hot, I adopted the habit of waiting until evening to pursue my odd hobby. It was a ritual that I had been repeating every night for about a month. At 14 years of age, I was a rough and fearless boy and all the ghost stories in the world would not have kept me from my love of stone-throwing. So, on this particular night, I was out on the hill, sitting in my usual spot, and happily throwing away. I had been doing this for about an hour and it was just beginning to get dark when I heard the front door to my house open. I knew that my father was coming out to tell me it was getting dark and to come on in so he could go to sleep without worrying about me. Predictably, he came around the house and stopped at the bottom of the hill, yelling: “Donald! Eric! Come on in – it’s getting dark and I want to go to bed.”

Eric is my nephew who was about nine years old at the time. I continued to sit, mumbling a low, “Huh? Ok.”  My father then walked a bit closer, saying: “Donald! Eric? You boys get in here now!” I then stood up and replied, “Eric is not up here. He is in his room. I am the only one up here.”

My father then continued up the hill, asking, “Well, who were those people you were talking to?”

I responded: “No one. I am here alone.”  To this, a frightened look crossed my father’s face.

“Donald, honey, are you sure Matt and Eric are not up here?” he asked. (Matt was a friend of Eric’s.)

He then said that there had been someone behind me and hadn’t I seen them?

When I said no, we began to look around the yard. After searching the property very thoroughly, we went inside the house to confirm that every family member was where they were supposed to be. They were.

We then woke up my brother, who got his pistol and went up the road to see that there were no strangers in the area and make another search of the yard.

All the while, my poor father was strangely quiet and looked so frightened. I had never seen him this way before. It was not until the next morning that he had recovered enough to tell us the whole story. 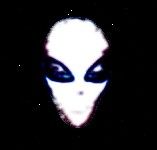 My father said that when he walked around the house he saw two “little people” standing behind me. Dressed all in white, he described them as looking like “a damn doctor or something.”

He did not see me, as I was sitting down and he assumed that the little people, whom he estimated to be about 3 ½ to 4 feet tall, were me and my nephew.

When he shouted for me to come in the house, the “little people” ran around the side of the hill above me, then went behind some small buildings on our property and he never saw them again.

Now, it is important to know that our yard was totally fenced in two sections. The “little white men,” as my dad put it, were standing right behind me on the other side of the fence. However, when they ran away, they were inside the fence hiding behind the outbuildings.

There was an open gate which went out into our yard which was also fenced. They could not have gotten into our yard without my seeing them and there is no way they could have crossed the fence so fast and would have certainly been heard by the dogs, which would have raised a ruckus.

Afterward, my father admitted that the incident scared him worse than anything had ever before, so much so, that for months he would not go out after dark without being armed.

Though I saw my father’s fear, I was still not afraid until he said to me, “they were standing there looking right down your shirt collar.”  That scared me some.

To this day, I haven’t a clue what these “little people” were. I often wonder where I would be if my father hadn’t come out that night. I also wonder how many other nights they might have been there before.

I am wondering if anyone has heard of anything similar to this before. If you have or ever do I would appreciate you letting me know.

If you have answers or similar experiences to Donald’s story, you can Email Donald Patton HERE.

About the Author: Donald D. Patton, M.A., is 29 years old and hails from Eastern Kentucky. Having obtained a master’s degree in general psychology, he is currently considering the pursuit of a doctoral degree in neuroscience.