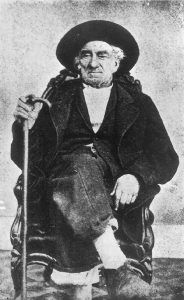 Joseph was one of seven children born to Joseph Robidoux II and Catherine Rollet Robidoux in St. Louis, Missouri. His father introduced him to the fur trade when he was just a child. At age 20, his father sent him to organize a trading post at Fort Dearborn, Illinois, the site of present-day Chicago. He was very successful in this endeavor, so much so that his competition hired local Indians to harass him and drive him from the area.

He then established a trading post near the site of present-day Omaha, Nebraska, in 1813, where he remained until 1822, when the American Fur Company bought him out and offered him $1,000 a year not to compete with them.

Returning to St. Louis, he worked as a baker until 1826, when he was hired by the American Fur Company to establish a trading post at the Blacksnake Hills, near the site of present-day St. Joseph, Missouri. After four years, he returned to independent trading and prospered, hiring as many as 20 men. In 1843, he hired two men to design a town for him and began selling lots. The new city was called St. Joseph and prospered quickly, growing from just 800 people in 1846 to nearly 9,000 by 1860. He continued to live there until his death at 85 in 1868.

One of the many buildings he established in St. Joseph was Robidoux Row, a historic apartment building completed in the early 1850s. The one-1/2-story brick structure continues to stand at 219-225 East Poulin Street in St. Joseph, Missouri. One of the oldest buildings in the city, Robidoux Row, now serves as a local history museum. 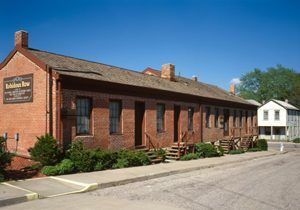 St. Joseph, Missouri – Jumping Off to the West