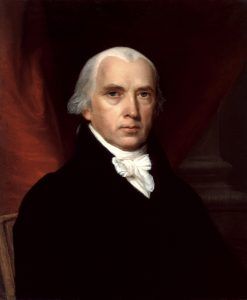 James Madison Jr. was born at his maternal grandmother’s house, on the banks of the Rappahannock River, in Virginia, on March 16, 1751. His family had lived in Virginia since the mid-17th century. His parents, James Madison Sr. and Eleanor Rose Conway Madison, resided at Belle Grove Plantation near Port Conway in Orange County. His father was a tobacco planter who grew up on a plantation he had inherited upon reaching adulthood. With an estimated 100 slaves and a 5,000-acre plantation, Madison’s father was among the largest landowners in Virginia. In the early 1760s, the Madison family moved into a newly built house they named Montpelier. Madison grew up as the oldest of 12 children, with seven brothers and four sisters, though only six lived to adulthood. He was sickly, suffering from seizures that would plague him throughout his life.

After completing his preparatory studies, James Madison Jr. was sent to the College of New Jersey in Princeton. He was under the charge of Dr. John Witherspoon, for his parents knew the atmosphere of the lower country at Williamsburg to be uncongenial for people from the mountain regions. In the Spring of 1773, he left Princeton with health much impaired by intense study. He immediately entered a reading course preparatory for the practice of the law, which he had chosen as a profession. Political affairs attracted his attention, and he was diverted from law to public employment. 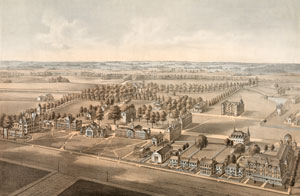 After graduating in 1771, Madison contemplated entering the clergy or practicing law but remained at Princeton to study Hebrew and political philosophy under the college’s president, John Witherspoon. He returned home to Montpelier in early 1772. The following year, he began studying law books, asking his friend William Bradford, a law apprentice, to send him a written study plan. Though he acquired an understanding of legal publications, Madison saw himself as a law student, not a lawyer, and never joined the bar.

Upon reaching adulthood, Madison was diminutive in physical stature, only weighing about 100 pounds and standing just 5 feet 4 inches tall. He had blue eyes and could be congenial in small gatherings. However, he suffered from episodes of mental exhaustion and illness with associated nervousness, which often caused temporary short-term incapacity after periods of stress.

A student of history and government, well-read in law, he was a member of the convention which formed the first Constitution for the new free State of Virginia in the Spring of 1776. The same year, he was elected a member of the State legislature and served in the Continental Congress in Philadelphia, Pennsylvania. There, the 36-year-old Madison took frequent and emphatic part in the debates and helped frame the Bill of Rights and enact the first revenue legislation.

He lost the suffrages of his constituents the following year because it was alleged that he would not “treat” the people to liquor and could not make a speech. The legislature named him a member of the executive council, in which office he served until 1779, when he was elected to membership in the Continental Congress. He took his seat there in March 1780 and was one of the most reliable men in that body for three years.” 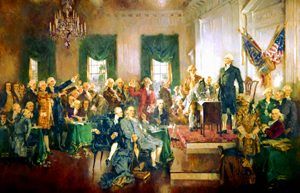 Signing of the Constitution of the United States, by Howard Chandler Christy, 1940.

Madison was again a member of the Virginia Assembly from 1784 to 1786, where he was the champion of every wise and liberal policy, especially in religious matters. He advocated the separation of Kentucky from Virginia; opposed the introduction of paper money; supported the laws codified by Jefferson, Wythe, and Pendleton; and was the author of the resolution which led to the convention at Annapolis, Maryland, in 1786. In the Virginia constitutional convention in 1787, Madison was chiefly instrumental in procuring its ratification, despite the fears of many and the eloquence of Patrick Henry. He was also a member of the convention that formed the Federal Constitution, and he kept a faithful record of that body’s proceedings, day after day. He was opposed to the financial policy of Alexander Hamilton and some of the most critical measures of George Washington’s administration. Yet, this difference of opinion did not produce a personal alienation of those patriots. After the labors of the convention were over, he joined Alexander Hamilton and John Jay in the publication of a series of essays in support of it. These, in collected form, are known as The Federalist Papers.

In early 1794, James was introduced to Dolley Payne Todd by Aaron Burr at James’ request. Dolley was the 26-year-old accomplished widow of John Todd, a Quaker farmer who died during a yellow fever epidemic in Philadelphia, Pennsylvania. After the arranged meeting, the two quickly became romantically engaged and prepared for a wedding that summer. However, Dolley suffered recurring illnesses because of her exposure to yellow fever in Philadelphia. They eventually traveled to Harewood, Virginia, for their wedding on September 15, 1794. Only a few close family members attended, and Winchester reverend Alexander Balmain presided. The couple never had any children, but Madison adopted Dolley’s one surviving son, John Payne Todd, after the marriage. 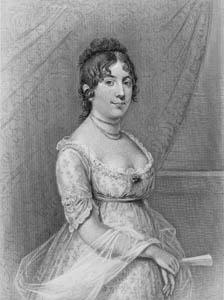 His republicanism was of the conservative stamp, yet Thomas Jefferson esteemed him so highly that he chose him as his Secretary of State in 1801. That station he filled with rare ability during the whole eight years of Jefferson’s administration, and then he was elected President of the United States. He was inaugurated as president on March 4, 1809, when the small, wizened man was said to have appeared old and worn.

This was a period of great interest in the history of our Republic, for a serious quarrel was then pending between the governments of the United States and Great Britain. In the third year of his administration, the quarrel resulted in the War of 1812, which lasted until 1815. At the start of the war, the young Nation was unprepared to fight, and its forces took a severe beating when the British entered Washington and set fire to the White House and the Capitol. However, a few notable naval and military victories, climaxed by General Andrew Jackson’s triumph at New Orleans, convinced Americans that the War of 1812 had been gloriously triumphant.

During his presidency, his wife Dolley became renowned in Washington, D.C., and excelled at hosting dinners and other important political occasions. With her warmth and cheer, she was the toast of Washington and helped to establish the modern image of the first lady of the United States as an individual who has a leading role in the social affairs of the nation.

After serving eight years as chief magistrate of the Republic, Madison returned to his paternal estate of Montpelier, Virginia, in March 1817. He never left his native county but once after returning from Washington, except to visit Charlottesville, occasionally, to perform his duties as visitor and rector of the University of Virginia. He traveled to Richmond in 1829 to attend a convention to revise the Virginia Constitution. He enjoyed his wife, books, friends, and agricultural pursuits at his estate. 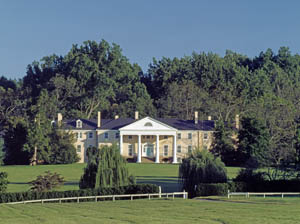