In the summer of 2018, we traveled to the Centennial State for some adventure in the Rockies. Our primary objective; Ghost Towns and Mining Camps of course. We had a great base to operate out of, parking our travel trailer at our friend’s cabin between Buena Vista and Hartsel. This article covers Clear Creek Canyon in Chaffee County, which is north of Buena Vista on Highway 24 around Clear Creek Reservoir. 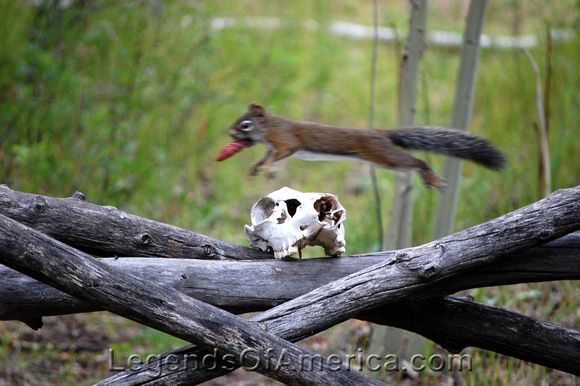 Located in present-day Chaffee County, this area was inhabited dating back to the 15th century by the Ute tribe. Primarily residing in the Arkansas River Valley, the tribe lived off deer, buffalo, elk, and other smaller game, along with mountain roots and berries. In the summer, the tribe would track game into the high country before retreating back to the foothills in the winter. Horses were introduced by the Spanish to the south who traded with them, giving the tribe an opportunity to expand their hunting grounds. Other tribes noted in the region in the early 1800s included the Arapaho and Cheyenne. 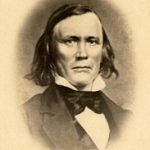 Also in the early 1800s, French fur trappers and traders began hunting beaver here, although it was considered dangerous due to the presence of the Natives. Kit Carson reportedly wintered in this region as well during his younger days at Bent’s Fort. The famous trapper, hunter, Indian scout and later military man, was well known to the Ute, and they “soon knew him so well he visited their camps, sat in their lodges, smoked the peace pipe, and dangled their children upon his knee. The Indians liked him exceedingly so that they often would listen to his counsel and advice.” That according to Charles Johnston in his 1910 book, Famous Scouts, Including Trappers, Pioneers, and Soldiers of the Frontier.

The Gold Rush of the late 1850s brought thousands of prospectors to Colorado Territory, established in 1861. As more Europeans invaded, relations with the Ute tribe was varied. Chief Ouray was known to be amicable and even helped some settlers, however other Ute forced the interlopers off their land. A treaty in 1868 found the Ute tribe relocating to a reservation in Western Colorado Territory, opening up the land for more farms and ranches in the Arkansas River Valley.

One of our day journeys in Chaffee County took us north of Buena Vista on Highway 24 to Clear Creek Reservoir. As you turn into the reservoir area on County Road 390, you are now entering Clear Creek Canyon. Just past the lake, you’ll enter a stretch of ghost towns that harken back to the mining days of the late 1800s. This twelve-mile stretch includes preserved mining camps, ghost towns and relics from the Silver Boom era. 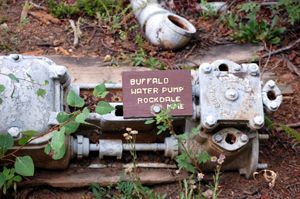 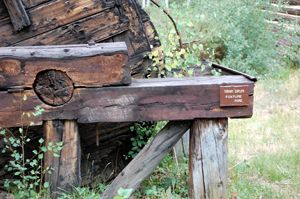 Mining in Clear Creek Canyon began around 1867. The story goes that prospectors from Leadville were camping in the canyon and lost their burros. When they found their pack animals had wandered down the creek, they noticed gold in the creek bed. This would eventually start a boom by the mid to late 1870s, with four large claims including Tasmania, the Fortune, the Banker, and the Swiss Boy, all big ore producers in the midst of many smaller mines. 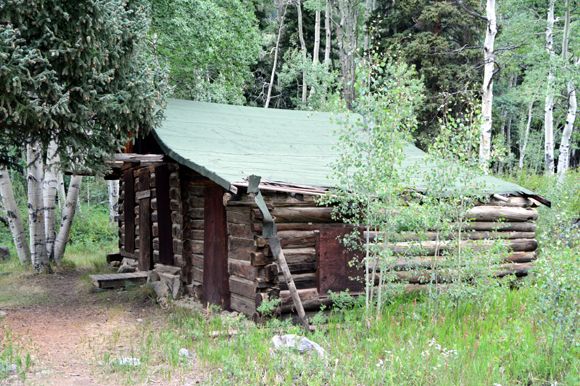 Circa 1880 cabin in Beaver Colorado. Photo by Kathy Weiser-Alexander.

The first ghost town you come to on this stretch of road is Beaver City. There’s only a couple of cabins left, built around 1880, with the one right off the road being the only one we ventured to. 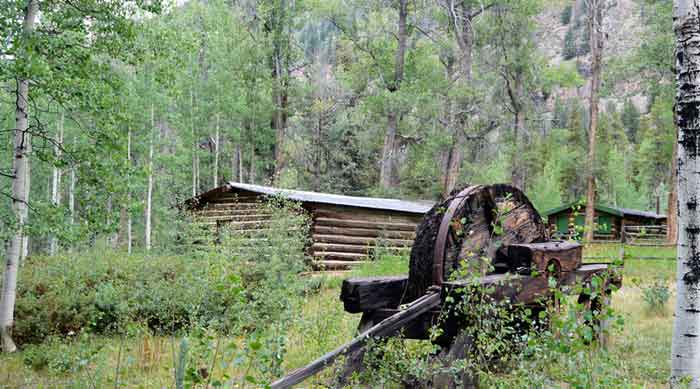 Not long after Beaver City is the much more substantial stop of Vicksburg, which is about 8 miles into your journey on County Road 390. This mining camp was platted in 1881, though probably had miners as early as 1867. The Swiss Boy Mine was the bases for the township. During its heyday, Vicksburg had over 40 buildings, including two saloons, two hotels, a store, boarding house, assay office, livery stable, blacksmith, post office, and even a two-story schoolhouse. A stagecoach made daily trips to through here from Granite, some 24 miles away.  At its peak, Vicksburg was home to almost 700.

You will first encounter the public museum with some great history to view, including old mining equipment, wagons and more. At the museum building door, have a seat on the bench and listen to the recording about Vicksburg’s history, while taking in the local scenery.

While most of the town has been reclaimed by the forest, across Vicksburg’s ‘main’ street from the museum, there is a row of old private cabins that have been continually occupied since they were built. The ‘main’ street is lined by Poplar trees brought in by the early miners. The trees are watered by ditches leading from the creek into town, dug on each side of the street to provide a watering system and hold wooden boxes that kept food cold and provided water for firefighting. 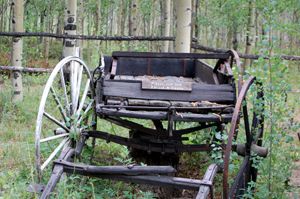 Old wagon by the entry into the Museum at Vicksburg, CO. Photo by Dave Alexander. 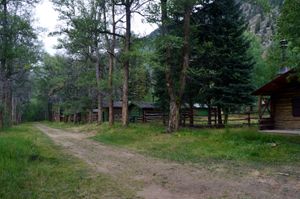 Cabins that have been continually used since construction in the 1880s. Vicksburg, CO. Photo by Kathy Weiser-Alexander.

Maintained by the Clear Creek Canyon Historical Society, this mining camp was listed on the National Register of Historic Places in 1977. 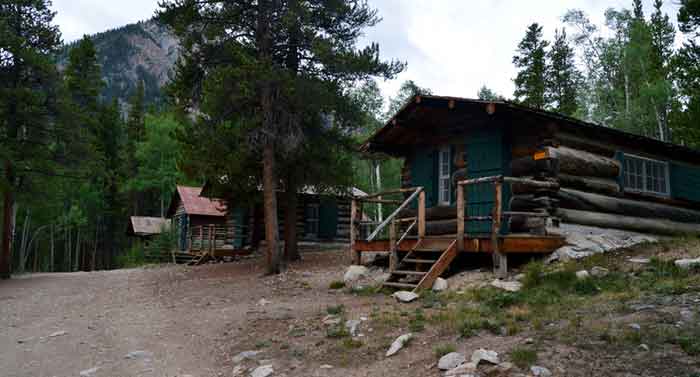 Crescent Mining Camp near former site of Rockdale with some original cabins. Photo by Kathy Weiser-Alexander.

Another two miles and you reach the Rockdale-Silverdale area, also known as Crescent Mining Camp. Near Rockdale, this camp includes four cabins that have been restored, two of them reportedly from the original Rockdale.   It appears most of Rockdale itself is buried under beaver ponds, at least one of the cabins in has a small marker telling of the 1881 camp. The forest service rents these out during the summer months, touting no amenities in the cabins, and no drinking water. 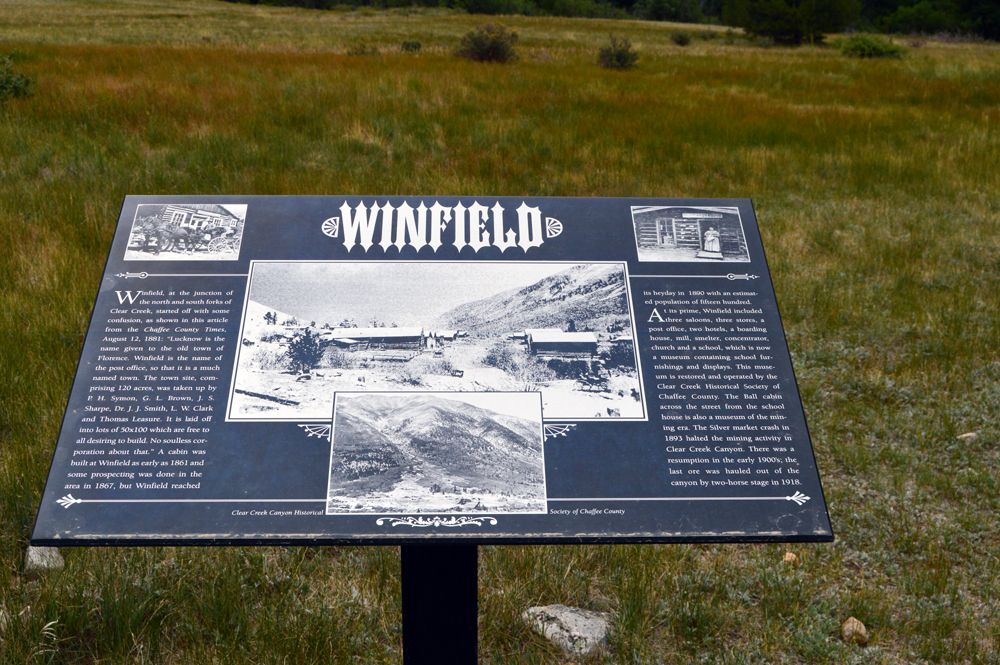 Marker at the ghost town of Winfield, Colorado. Photo by Dave Alexander

Two more miles on County 390, or twelve miles into your journey, you reach the last ghost town on the Clear Creek Canyon trek, Winfield.

At the junction of the north and south forks of Clear Creek, this camp had several names. A historic marker as you enter town relates an article in the Chaffee County Times from August 12, 1881:

“Lucknow is the name given to the old town of Florence. Winfield is the name of the post office, so that it is a much named town.” 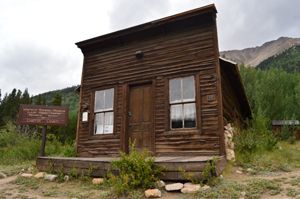 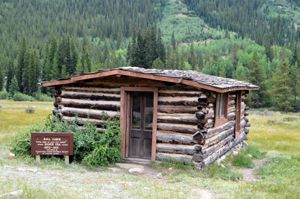 There was a cabin here as early as 1861, but Windfield’s heyday wouldn’t come until 1890 when the population peaked at around 1,500. There were three saloons, three stores, two hotels, the post office, a boarding house, mill, smelter, concentrator, church, and a school, which is now a museum. The Ball cabin across the street also acts as a museum of the mining era.

In addition to many cabins, most of which appeared to be privately owned, there is a historic cemetery about a quarter mile or so up the road past Winfield. The graves of 26 are here, including one man stoned to death by area Indians he had cheated. The museums and cemetery are maintained by the Clear Creek Canyon Historical Society.

Because of the harsh Rocky Mountain winters here, residents at these mining camps were forced to leave, and return each spring to resume mining. Clear Creek Canyon mining would take a big hit and shut down with the Silver market crash of 1893. Though there was a resumption of mining in the early 1900s, the last ore was hauled out of the canyon in 1918.

Museums at Vicksburg and Winfield are open to the public during the summer months, however, the road is open year-round. 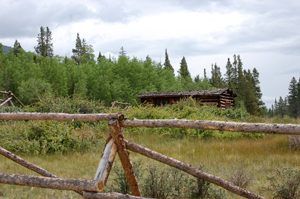