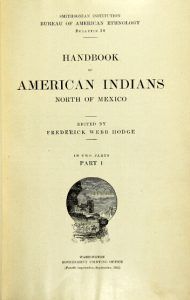 Frederick Webb Hodge was an author, editor, anthropologist, archaeologist, and historian, one of his most famous writings was the Handbook on American Indians, published in 1906.

Hodge was born in Plymouth, England to Edwin and Emily Webb Hodge on October 28, 1864. His father moved his family to Washington, D.C. when Frederick was seven years old. When he grew up he attended Cambridge College (George Washington University). Later, he was involved in the Columbia University, Hemenway Southwestern Archaeological Expedition, and the U.S. Geological Survey.

Throughout the years, he took positions with a number of museums including the director of the Southwest Museum of the American Indian in Los Angeles, California, and served as an executive officer at the Smithsonian Institution, as well as serving on a number of committees dealing with Native Americans and archeology.

In 1901, he was employed by the Smithsonian Institution as an executive assistant in charge of International Exchanges but transferred to the Bureau of American Ethnology in 1905, where he worked until 1918. In 1906 he published the Handbook on American Indians and the next year began editing Edward S. Curtis‘ monumental series, The North American Indian, a 20 volume series that was published between 1907-1930. After leaving the Bureau, he moved to New York City and became editor and assistant director at the Museum of the American Indian.

In 1915, accompanied by the museum’s director, George Gustav Heye, he undertook excavations at the Nacoochee Mound near Helen, Georgia. Between 1917 and 1923, he directed excavations of the ruins of Hawikuh, near Zuni Pueblo. In 1932, he moved back to Los Angeles, California, where he assumed directorship of the Southwest Museum and became the editor of Southwest Museum’s The Masterkey. He retired in 1956 and died the same year on September 28, 1956, in Santa Fe, New Mexico.