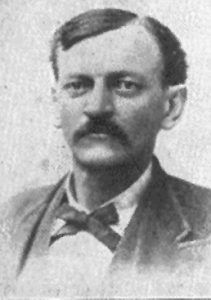 Major Frank Joshua North is best known for his organization of a group of Pawnee scouts and was instrumental in the Indian Wars, protecting the wagon trails and, later, the railroad crews during the transcontinental railroad construction.

Born in Ludlowville, New York, on March 10, 1840, his family moved to Ohio when Frank was just two years old. They moved again in 1856 to Nebraska, where the 16-year-old worked as a transporter, moving goods between Omaha and Fort Kearny. In this capacity, North first made contact with the local Pawnee Indians. He soon learned their language so well that by 1860, he worked at the Pawnee Reservation near Fullerton, Nebraska as a clerk in their trading post. Later he became so proficient in the language that he worked as an interpreter.

In 1864 he accompanied the first Pawnee Scouts to the field under General Samuel R Curtis in an unsuccessful campaign against the Sioux. Curtis was so impressed with his knowledge of the Pawnee that he suggested that North organize a company of Pawnee scouts to help the army during the Indian Wars. When North agreed, he was given the rank of lieutenant. For the next 13 years, North would lead the scouts in several campaigns against the Plains Indians, serving in Nebraska, Kansas, and Wyoming, receiving promotions to captain and then to major. But by 1877, the Plains Indians had all but been subdued, and the North and his scouts were mustered out for the last time.

North then partnered with William F. “Buffalo Bill” Cody in a cattle ranch at the head of Dismal River in Western Nebraska. When the pair sold the business in 1882, he served one term in the Nebraska Legislature before joining Buffalo Bill’s Wild West Show as its Indian Manager. In 1884 he was severely injured in a riding accident in Hartford, Connecticut. He was brought home to Columbus, Nebraska, where he continued to suffer from the injuries until he died on March 14, 1885.

Indian Troubles During the Construction of the Railroad