Built on Prospect Bluff, a prominent bank overlooking the Apalachicola River, the site that would become Fort Gadsden was involved in a bloody battle for power during Spanish Florida’s last days. 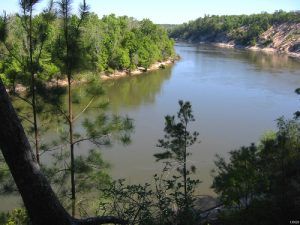 In the summer and fall of 1814, near the conclusion of the War of 1812, British Major Edward Nicholls led an expedition to recruit Seminole Indians and escaped black slaves in Florida to assist them in the fight against America. At this time, Spain was losing its hold on Florida and Britain hoped to take advantage of Spain’s weak defenses. Unchallenged, British Colonel Edward Nicolls and Captain George Woodbine established a stronghold on Prospect Bluff in 1814. They offered land and freedom to slaves in the British West Indies for service and recruited more slaves from Louisiana, Alabama, Georgia and the Lower Creek Nation.

Called “British Fort”, the post was built about 500 feet from the river bank and consisted of an octagonal earthwork holding the principal magazine, and was surrounded by an extensive rectangular enclosure covering about seven acres. Bastions were built on the eastern corners which had parapets that were 15 feet high and 18 feet thick. It was used as the British headquarters for negotiations between the black and Indian communities. There, the British armed and trained about 3,000 Indians and 300 black soldiers to protect the fort, which safeguarded families, fields, and pastures extending 50 miles along the Apalachicola River.

In the early summer of 1815, the British withdrew from the area, leaving behind ample artillery and military supplies under the charge of a black military leader named Garcon. The post then became known as “Negro Fort” which soon served as a “beacon of light to restless and rebellious slaves.” The fort soon earned a reputation as a threat to supply vessels that traveled the Apalachicola River between the United States and the Gulf of Mexico. It was also perceived as a threat to white slaveholders in Georgia. 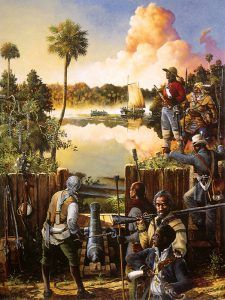 In 1816, the American army, under the command of Major General Andrew Jackson, constructed Fort Scott at the junction of the on the Flint and Chattahoochee Rivers in Georgia, just a few miles from Florida. The fort was purportedly built to protect the American border between Georgia and Florida, but Jackson also had other plans – to destroy Negro Fort. In July 1816 Jackson gave the order to destroy Negro fort and to return the blacks to their white owners.

Alerted to the impending attack, black families and Choctaw, Upper Creek and Seminole women and children took refuge in the fort while others hid in the surrounding forests. On July 17, 1816, Colonel Duncan Clinch left Fort Scott and traveled down the Apalachicola River with 116 men. Clinch and his men then combined forces with Major William Mcintosh and his company of 150 Lower Creek Indians.

In the ensuing warfare, an American shell hit an open magazine within the fort, killing approximately 300 men, women, and children. Colonel Clinch later reported that “the explosion was awful and the scene horrible beyond description.”

Afterward, the American soldiers burned what was left of the fort and all of the surrounding settlements. The few survivors were taken prisoner and turned over to Georgia slaveholders who justified their title to them by saying that their ancestors had owned the ancestors of the prisoners. Two of the defending leaders, Garson and a chief of the Choctaw Nation, were two of the survivors. These men were sentenced to death.

The pace of destruction and bloodshed increased over the next two years for everyone along the Apalachicola River on the American border. Settlers were killed, plantations raided, livestock and slaves seized.

This “savage and negro war,” as Andrew Jackson himself called it, was devised to destroy black towns in Florida, depriving slaves of bordering states of refuge, while at the same time bringing the entire Florida province under American rule.

Despite Spanish protests, Jackson ordered Lieutenant James Gadsden to build a new fort on the site of the old Negro Fort in 1818. This post was called Fort Gadsden and American forces were garrisoned there until Florida was ceded to the United States.

Afterward, the fort was virtually forgotten until 1862, when the Confederate Army realized that the Apalachicola River was the largest exporting and importing route in the region and that the river led to plantations in Florida, Georgia, and Alabama. Confederate troops then occupied the fort until July 1863, when malaria forced its abandonment.

Today, the site of the fort is a National Historic Landmark and is listed in the National Register of Historic Places. The Fort Gadsden Historic Site is situated within the Apalachicola National Forest near Sumatra, Florida. Remains of the earthen walls of the fort are still visible and an interpretive kiosk gives detail of its history and the cemetery where the victims from 1816 are buried. 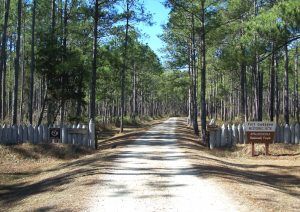