Fort Clinch is a 19th-century masonry coastal fortification built for seacoast defense of northeastern Florida in 1847. The location near the northernmost point of Amelia Island has long been used as a fortified site beginning with the Spanish in 1736. The purpose was to protect the entrance to Cumberland Sound and the mouths of the Amelia and St. Johns Rivers. 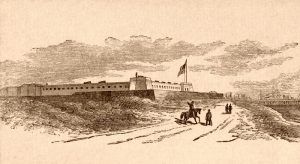 The building of pentagon-shaped fort began in 1847 and in 1850, it was named for General Duncan L. Clinch, who fought in the War of 1812 and was an important figure in the First and Second Seminole Wars. The brick fort has five corner bastions and several structures in the interior courtyard, including a two-story barracks. It was designed to mount 70 pieces of heavy artillery but was never fully armed. Construction continued until 1867.

After the Civil War began in 1861, the Florida Militia occupied the fort and used it as a safe haven for Confederate blockade runners. In March 1862 General Robert E. Lee ordered the abandonment of the fort in order to use scarce troops in other areas. It was then re-occupied by Union forces, giving them control of the adjacent Georgia and Florida coasts. During the rest of the war, they used it as a base of operations. It was never attacked during the war.

In 1869, the fort was placed on caretaker status and remained so until 1898 when the Army garrisoned it during the short Spanish-American War. In September, it was abandoned it again and gradually deteriorated. 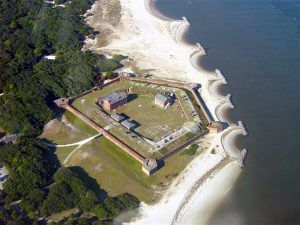 In 1935, the State of Florida bought the fort and surrounding 256 acres and in 1936, the Civil Conservation Corps began to restore the fort, build a museum, and develop the grounds for a state park. Fort Clinch State Park that opened to the public in 1938. It was closed to the public during World War II and used as communication and security post. It was re-opened to the public after the war ended.

The fort was placed on the National Register of Historic Places in 1972.

Today, Fort Clinch State Park includes the restored two-story barracks, the prison and guardhouse, and a two-story warehouse. A museum located adjacent to the Visitor Center provides visitors with the history of Fort Clinch, as well as artifacts, historic weapons, displays, and a short video introduction of the life of a Union Soldier. 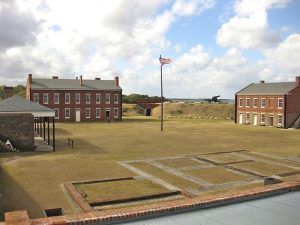 The 1,400-acre state park also provides a number of trails, camping, fishing, and water activities along its shoreline. The park is open daily. It is located on the northernmost point of Amelia Island, at 2601 Atlantic Avenue, in Fernandina Beach, Florida.