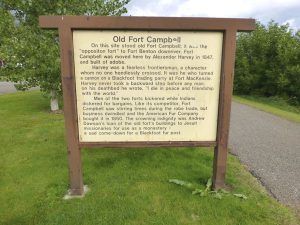 Fort Campbell, Montana was first established by the Missouri Fur Company in 1845 on the south side of the Missouri River, just one mile from its rival, Fort Benton.

First housed in a log stockade, it was established in direct competition with the American Fur Company. The fort was operated by Alexander Harvey, the most infamous of Indian traders on the Upper Missouri River, known to have been fearless, bold, vindictive and quarrelsome. In 1847 it was moved to the north side of the river and Harvey built an adobe building, the first of its kind in the area.

Harvey died on July 20, 1854, while traveling on a trip downriver to Fort William, North Dakota in a mackinaw boat and was buried at the fort. The Fort was sold to American Fur Company in 1860. It was later was occupied as a Jesuit monastery for the Flathead Indians. It was later abandoned.

The site is located in Fort Benton, Montana’s Historic District and is marked at River and 12th Streets.