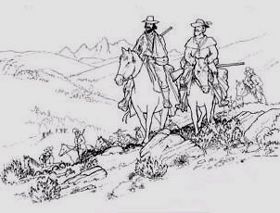 Fort William, North Dakota, established in August 1833 by William Sublette and Robert Campbell, was a trading post was located at the mouth of the Yellowstone River about 2.4 miles east of Fort Union, North Dakota. In April 1834, the men sold the site to the American Fur Company and abandoned the location. The new company kept the trading post in operation until 1836 when they closed it.