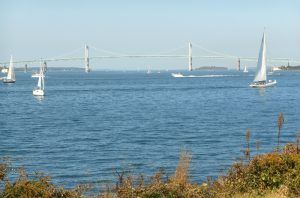 Situated on a point at the entrance to Newport Harbor, Fort Adams, Rhode Island, was formerly one of the principal coastal defenses along the Atlantic Ocean.

It was first established on July 4, 1799, and named for President John Adams, who was in office then. Its purpose was to protect the growth of the American Navy, which had chosen Newport and Narragansett Bay in the early 19th century for its needs. The fort was fairly simple, with an enclosed indented masonry work for 12 guns, a brick magazine, and soldiers’ quarters for one company. Its first commander was Captain John Henry, who was later instrumental in starting the War of 1812. Some additions were made in 1809, and the number of cannons was increased to 17. It was described by the Secretary of War in 1811 as “an irregular star fort of masonry, with an irregular indented work of masonry adjoining it, mounting seventeen heavy guns… The barracks are of wood and bricks for one company.”

However, when the War of 1812 began, Fort Adams was in run-down condition. After some delay, the State provided two companies of artillery and two companies of infantry to man the guns. But, with only 17 guns at Fort Adams and 38 guns at Fort Wolcott on Goat Island, the two forts could hardly withstand a sustained attack. The War of 1812 demonstrated that the seacoast was almost defenseless. After it was over, a board of engineers was organized to study the whole National Defense program and devise the necessary fortifications to protect the entire coasts of the Atlantic and Gulf of Mexico. 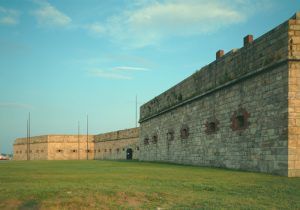 The decision was made to replace Fort Adams with a newer and much larger fort. This was part of what became known as the third system of US fortifications. Overseen by Lieutenant Colonel Joseph Gilbert Totten, the foremost American military engineer of his day, construction of the new fort began in 1824 and continued at irregular intervals until 1857. The fort consists of an irregular pentagonal masonry main work with sides up to 900 feet long, and its walls made of granite with brick vaulting. On a point with water on three sides, the fort has extensive landward works and a large granite redoubt beyond the outworks. These various defenses covered 20 acres and were designed to mount nearly 500 pieces of artillery of various calibers. When it was complete, it was rivaled in size only by Fort Monroe in Hampton, Virginia, and Fort Jefferson on the Dry Tortugas in Florida.

Fort Adams never saw military action, but the Naval Academy was moved there during the Civil War. During World War I, the fort was used as a training center, and men were sent overseas from Newport Harbor. Mines and nets were strung across the channels. 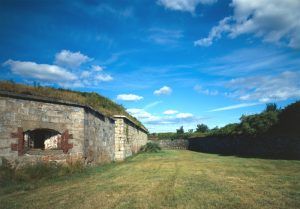 During World War II, new temporary buildings were constructed, and training was hastily begun as thousands of men poured through Newport. Many other changes also occurred, including the building of anti-aircraft batteries, the laying of controlled minefields, the old Service Club was rebuilt, and the Chapel was built. Fort Adams was the headquarters of the Harbor Defenses of Narragansett Bay.

In 1953, the Army transferred ownership of Fort Adams to the Navy. President Dwight D. Eisenhower utilized the former commanding officer’s quarters, built in about 1873, during his summer vacations in Newport in 1958 and 1960. The building is now called the Eisenhower House.

In May 1965, the fortification complex and the adjacent waterfront property were given by the Navy to the state of Rhode Island for use as a state park. In 1976, Fort Adams was declared a National Historic Landmark.

The partially restored fort is open to the public today and operated by the Fort Adams Trust. Period guns and carriages are on display. Daily guided tours from Mid May through Columbus Day have access inside the old fort. The property is also the scene of many public and social events. 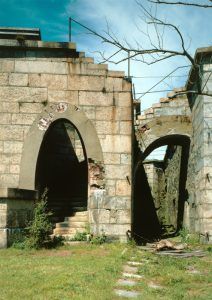 War & Military of the United States