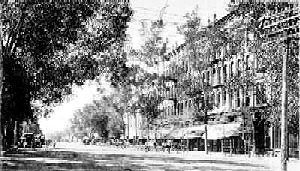 In the late 1800s, the Fleagle family traveled from Iowa, settling in the flatlands of western Kansas. Raising four boys, the two oldest boys were hard-working and conscientious, but the other two, Ralph and Jake Fleagle would grow up to be early 1900s outlaws.

Heading out to San Francisco, California, Jake became a card shark. Later, they traveled to Oklahoma, where Jake was arrested and sentenced to one year at the Oklahoma State Penitentiary for burglary. When he got out, Ralph was waiting and they returned to western Kansas, to Garden City.

Neighbors began to notice that Ralph and Jake were constantly coming and going to the farm and the family was beginning to prosper with a new house, tractor, and increasing numbers of cattle stock. The brothers convinced their family that they had done well in the stock market, but what no one knew, was they were really leading a gang of gunmen who were terrorizing the western states. Jake, the leader of the gang, led them up and down the Sacramento Valley for years, usually raiding big money crap games and high stake gambling houses. Periodically, they would return to Garden City when the heat was on in California. Jake was a philanderer and a drinker but still managed to accumulate a sizable bank account. Ralph, on the other hand, was a tightwad and secretly buried his money in places all over California, Nebraska, Missouri, and Kansas. Historians estimate that the Fleagles and their gangs were responsible for 60% of the heists in and around Kansas and California during the 1920s. 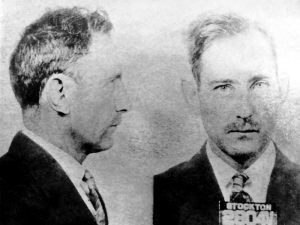 The brothers rented a new place not far from their parents where they could plan their capers more privately. Here, in 1928, along with three new members of their “gang,” they planned to rob the First National Bank of Lamar, Colorado. Corazon Gargullio, an escapee from San Quentin, cased the bank for the crew. The other two handpicked members were George Abshier from Colorado and Howard Royston from California. Though planned very carefully, the heist was put off several times due to Jake’s superstitions. Gargullio got tired of the waiting and left the gang, only to be shot down within days by the FBI.

When the day finally arrived, the four men entered the bank, filling their sacks with $220,000. In their 15 years of stealing, the Fleagle brothers had never shot their weapons, but on that day in Lamar, Colorado, the bank president, A.N. Parrish fired at Royston with a 45, hitting him in the jawbone. Jake fired back at Parrish, killing him. The bank president’s son, J.N. Parrish ran to help his father and was also shot down by Jake. In the ensuing panic, the alarm was triggered and the gang fled with bank employees Everett Kessinger and Ed Lungren as hostages, with the sheriff close behind them. When one of the gang’s shots hit the radiator in the sheriff’s car, the gang sped away leaving the lawmen behind. Once outside of town, they dropped off Ed Lungren, the bank teller, but Kessinger was kept on the running board to be used as a shield in case they encountered more law enforcement.

With Royston lying on the rear floor moaning from the slug he had taken in his jaw, the gang sped down the back roads of Colorado until they reached western Kansas. Once back on their ranch, they tied up Kessinger, and the Fleagle brothers buried the money. Around midnight, they finally roused a Dr. W.W. Wineinger with a gun to his head, bringing him back to the ranch to tend to Royston.

However, when Dr. Wineinger did not return home, the townsfolk began a wide search. The doctor was finally found under his old Hudson automobile at the crisscross of a cowpath. He was bound, gagged, blindfolded, and shot in the back. A few days later, cashier Kessinger’s bullet-riddled body was found in a weedy patch north of Liberal, Kansas. Like the Doc, he had been bound, gagged, and shot in the back. Citizens were outraged. The town newspaper cried for revenge. The law sent out dozens of manhunters but the gang had already fled to St. Paul, Minnesota.

However, Jake Fleagle had made a fatal mistake, leaving a single fingerprint on Doc Wineinger’s old car. In those days, a single print was a long shot, but the law got lucky when a transient named William Holden was arrested on suspicion of a train stickup. Holden was later freed after providing a solid alibi, but the sheriff sent his fingerprints to Washington on a hunch.  The prints were identified not as belonging to a William Holden, but rather to Jake Fleagle who had served time in the Oklahoma Penitentiary and matched the print on Dr. Wineinger’s car.

Sheriff s deputies hurried to the Fleagle ranch where Ralph’s address was provided as Kankakee, Illinois. Chief Harper rushed to Kankakee, taking Ralph by surprise and brought him back to Garden City in shackles. Ralph started talking.

Royston, still bearing the Lamar bullet scar, was living a quiet exemplary life as a father and husband when he was arrested in San Andreas, California. He tattled on George Abshier, and Abshier was picked up.

With no lead on Jake Fleagle, over a million posters prominently displaying his prison photo were distributed to almost every city and town in the nation. Twenty-five thousand dollars was offered for his capture. Finally, he was shot down in a running gunfight with police in Branson, Missouri.

Ralph Fleagle, Royston, and Abshier were all hanged in the Colorado State Penitentiary at Canon City. 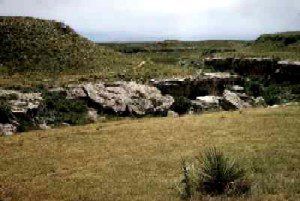 As for the hundreds of thousands of dollars of Ralph Fleagle’s buried booty, one cache was dug up in Nebraska in 1952, another in Kansas in 1961, and another near Murrieta, California.

There are many Fleagle bandit caches that are still said to be scattered throughout the Inland Empire of Southern California, as well as in the Sacramento, California, and Garden City, Kansas, areas.

One buried cache of $100,000 taken from a bank in Nebraska is said to be buried in one or two places: in the area of Battle Canyon, in the badlands of the Logan-Scott County area; and/or on Ralph’s Fleagle’s ranch where he lived before he was captured near Branson, Missouri. 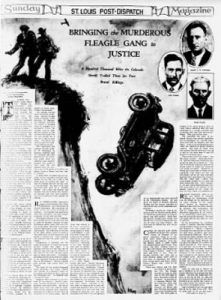 Fleagle Gang in the Newspaper