After the French, the British became the main threat. Beginning with Sir Francis Drake’s raid on St. Augustine in 1586, during which he burned the town, England repeatedly harassed the Spanish colony. Charles Towne (Charleston) in the Carolina Colony was established by the English in 1670. The English colony of Georgia was founded in 1733 by General James Oglethorpe. Both of these colonies were on land claimed by Spain. Hostilities were inevitable, and the British leaders were looking for an excuse for attacking St. Augustine. Wars in Europe gave them the excuse to carry the hostilities to the new world. Whoever controlled Florida controlled the rich shipping lanes coming from the Spanish Caribbean. The British had unsuccessfully laid siege to St. Augustine twice in – 1702 and 1740, the second siege leaving St. Augustine in ashes.

Florida Governor Montiano knew the British would be back and would most likely attempt to come through the unguarded inlet at Matanzas. Therefore, he immediately ordered a fort to be built to guard these southern approaches — Fort Matanzas.

Work started on the fortress tower in the fall of 1740 when Coquina stone was quarried at El Piñon, a small inlet south of Matanzas. Construction was difficult, for long piles had to be driven into the marsh to support rising stonework. Repeatedly, the British and their Indian allies tried to stop construction. On July 21, 1741, the British moved in to attack the Spanish. Two British ships, the sloop St. Philip and a schooner (a sailing vessel with two or more masts) sighted a Spanish sloop anchored inside the inlet of Matanzas. A Spanish galliot (a shallow-draft vessel propelled mainly by oars), which had gone unnoticed by the British, opened fire from long range but scored no hits. Darkness and fog soon halted the British attack.

The next day the British again attacked. At 10 o’clock in the morning the St. Philip, now clear of the fog, moved in on the Spanish sloop. The sloop attempted to move away but ran aground on one of the many sandbars in the area. The British seized the opportunity and opened fire on the stranded ship. Several shots found their mark – two Spanish crewmen were killed and two were wounded. The Spanish gallion again saved the day by opening fire on the British ships, preventing them from taking further action. The St. Philip and her accompanying sloop were forced to retreat back to the open sea. If the British had been able to defeat the gallion, they would have destroyed the Fort Matanzas construction.

In September 1742 Oglethorpe tried again. By this time Fort Matanzas was completed and fired its cannon. The British retreated without firing a shot. The next April Oglethorpe returned again. However, heavy surf kept him from approaching the inlet or landing men and arms on the beach. Neither side fired a shot.

In 1751 Manuel de Montiano was awarded the governorship of Panama, a very wealthy colony compared to St. Augustine and Florida. He died there in 1758. 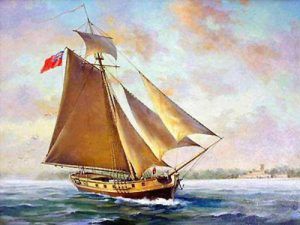 Ironically, after all the fighting in Georgia and Florida, all it took was a signature on a piece of paper in Europe to take Florida away from Spain. During the Seven Years War (French and Indian War), the British had captured Spanish Cuba and the Philippines. In order to get these valuable colonies back, Spain was forced to give up Florida. Signed on February 10, 1763, the First Treaty of Paris, gave all of Florida to the British.

The Spanish people of St. Augustine packed up all their possessions, including the forts’ cannons, and moved to Cuba. The British supply ship, Industry, on its first run to St. Augustine bearing cannon destined for Fort Matanzas, sank near the St. Augustine Inlet, and all supplies were lost. Archeologists, working from the St. Augustine Lighthouse, have discovered this wreck and have recovered some of the cannon and other artifacts.

The English staffed Fort Matanzas with one sergeant, six or eight privates of infantry and one private from the Royal Artillery. As the political climate changed as the American colonies moved towards revolution, more cannons were added with two 18-pounders placed at the fort in 1763.

Life for the English soldiers at Fort Matanzas probably differed little from their Spanish counterparts. Days were spent in drills, repair to the fort and equipment, and foraging for food as the officer attempted to keep his men occupied with useful tasks.

Britain and Spain During the American Revolution 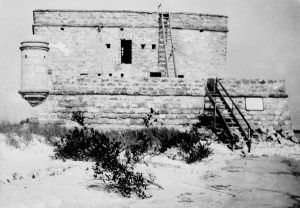 The British had divided Florida into East and West Florida, so, along with Nova Scotia, Great Britain had sixteen American colonies. While the War for American Independence was raging to the north, the Spanish, under General Bernardo de Gálvez, the governor of Louisiana, was attempting to harass the British on their western frontier.

Gálvez captured Baton Rouge, Louisiana; Natchez, Mississippi, and Mobile, Alabama, all in British West Florida. After losing Pensacola to the Spanish, the British were afraid that the Spanish might make plans to capture St. Augustine by trying the same plan the British had tried– coming up the Matanzas River and attacking from the rear. However, such plans were never executed.

On September 3, 1783, the Second Treaty of Paris ended the American Revolution and returned Florida to the Spanish. This time, however, most of the population, who owned businesses and plantations, did not leave. With so many British remaining in Florida, and very few Spanish returning, the character of this Spanish colony changed, leading to the eventual takeover by the United States.