Missouri pioneer, Ephraim James Brown, is the only man who was murdered on the trail whose grave remains with a known location.

Brown was born in Kentucky in about 1823. Somewhere along the line, he made his way to Ralls County in northeast Missouri near the Mississippi River. There, he married his 16-year wife Nancy Ann Sheckles in 1846, with whom he would have four children.

The couple settled on land located in Salt River Township. Their farm was near land that was occupied by Nancy’s extended family including two of her married sisters, Rebecca Sheckles Witt and Mary Frances Sheckles Menefee, and the sisters’ brothers Ira, Napoleon and Jackson Sheckles. Frances Manafee was the wife of Nimrod W. Menefee and they lived with an aunt next door to the Browns. Nancy Brown’s relatives numbered 33 people at the time of the 1850 census. 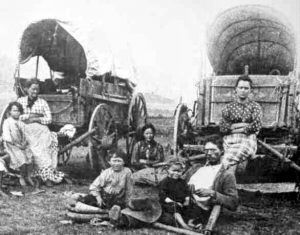 A family on the trail

In about 1852, Ephraim Brown and his brother-in-law, Nimrod Menefee, went to Sacramento, California where they were partners in a general store for a couple of years. After saving their money they returned to Missouri with a plan of returning to California with their families.

In 1857, Ephraim Brown organized a wagon train which included many animals such as125 head of loose cattle. The caravan also included several members of Nancy’s extended family including Nimrod Menefee’s 61-year-old father Arthur Menefee, who had married the 24-year-old widow Rebecca Sheckles Witt. Along with them, was several of Arthur’s grown children and teenage daughters. Other members included Nancy Brown’s unmarried brothers – Ira, Napoleon, and Jackson Sheckles.

The center of authority in the wagon train were Ephraim Brown, Arthur Menefee, and his son Nimrod Menefee. All three were married to daughters of Paulina and Ira Sheckles, Sr.: Rebecca, Mary, and Nancy.

The only account of the journey is Arthur Menefee’s diary and while the events were not specific, a careful reading of his journal makes it clear that some of the women of the wagon train were in constant conflict which resulted in the death of Ephraim Brown “owing all to the Women’s tongue.”

As early as May 24 while still in Missouri Arthur Menefee wrote:

“Nim [Menefee] and Ephraim coming up at noon. Great joy in camp. All supted together in mutual friendship and harmony & continued until next morning when a little storm arose between Mary [Menefee] and Nancy [Brown].” 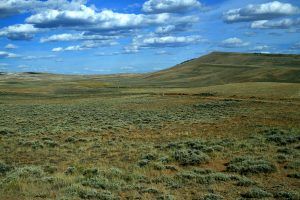 On August 2, the company was camped at Rock Creek about 15 miles east of where the trail crosses the Continental Divide at South Pass, Wyoming. Arthur Menefee wrote:

“Next morning at the point of leaving a conflict took place which terminated in the death of E. Brown. Buried him & left at 12 a.m. traveling over a tolerable road….. still not satisfied with the justice unfortunateness of the past day, owing all [to] the Women’s tongue.”

He never commented on the incident again in his diary.

On August 11th Arthur, while the wagon train was camped east of Commissary Ridge on the Sublette Cutoff, about 100 miles west of South Pass, wrote:

“Here we tried the Boy & dismissed him from the Train after finding him guilty, thence pursuing our journey….”

The entries of Arthur Menefee were not enough to clarify the cause of the murder but two obituaries in 1936 for Anne Louise Brown, the daughter of Nancy and Ephraim, it was written:

“[Ephraim] Brown was fatally shot in a quarrel shortly after the trek began.”

The second obituary adds that when the quarrel took place, they were “standing guard over the stock to prevent Indian raids.”

After the death of her husband, Nancy and her four children proceeded with the wagon train, which reached Carson City, Nevada on October 11th. Most of the group then went on to California. However, Arthur Menefee stayed in the valley and died there two months later. Nancy Brown and her children also remained, spending the first winter in the valley.

Nancy went to California the next year where she and her family lived at Sutter’s Fort, Markleville, and near Stockton, where the children were educated. 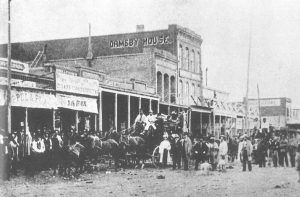 In 1859, she married an ex-Forty-niner named Chester Swift in Sacramento and the couple would have several more children. Chester worked as a teamster for the Nevada mines and the family lived in a house in Carson City. However, Chester, who was a habitual gambler, lost their home sometime in the 1870s and then deserted the family.

Nancy soon made her way back to California where she made a meager living as a cook. But her earnings were not enough and she was forced to give up her three young Swift children to an orphanage in Vallejo, California.

In 1880, she was running a boarding house in Bodie, California. Later she was living in Merced, California where her daughter, Ann Louise Brown Carter, was living with her husband and family.

Having been abandoned by Chester Swift for many years, she married a man named William Newman in 1882 and able to retrieve her children from the orphanage. Not long after the marriage, however, Chester Swift showed up and the marriage to Newman was dissolved. Soon afterward both men left, never to be seen again.

In the 1890s Nancy Brown Swift moved with her daughter, Lillie May Swift French, to a ranch near Winslow, Arizona. She died there on March 22, 1901. The location of her grave is unknown.

Ephraim Brown’s grave is located near Rock Creek, outside Atlantic City, Wyoming. He was 34 at the time of his death. The grave is still marked by the headstone put up by Brown’s companions on August 2, 1857.

Oregon Trail  – Pathway to the West

1 thought on “Ephraim Brown – Murdered on the Oregon Trail”