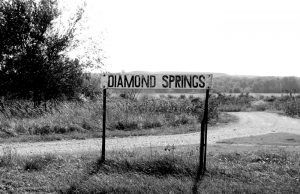 When the Santa Fe Trail was first surveyed in 1825, Diamond Spring, Kansas was called the Diamond of the Plains, and records of Santa Fe traders who passed by Diamond Spring date back as early as 1821 when William Becknell, called the “Father of the Santa Fe Trail,” combined several Indian paths and created a line of commerce between the United States and the residents of Santa Fe, New Mexico, then governed by Mexico.

The spring was first named Jones Spring by George Sibley during the 1825 survey of the Santa Fe Trail in honor of Ben Jones, who discovered the welcome source of water. Two years later, Sibley re-surveyed the trail, making a few corrections, and noted:

“This spring is very large, runs off boldly among rocks, is perfectly accessible, and furnished the greatest abundance of most excellent, clear cold sweet water. It may be appropriately called ‘The Diamond of the Plains,’ and so I had it marked on an Elm tree which grows near and overlaps it.” 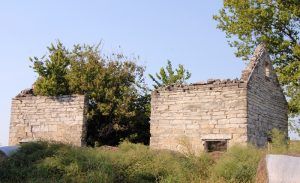 Afterward, it was known as Diamond Spring and became a favorite stopping place for the many emigrants traveling along the Santa Fe Trail. Here, these hardy pioneers often rendezvoused to form larger caravans, as the path to the southwest was vulnerable to Indian attacks by the Comanche, Kiowa, and Cheyenne tribes.

A mail station was established at the spring by the Waldo Hall Company in 1849. The impressive station complex comprised two large stone buildings, one of which served as a hotel, restaurant, and saloon and the other as a warehouse and store. A blacksmith shop, large corrals that could hold hundreds of livestock, and several out-buildings were also situated at the site. 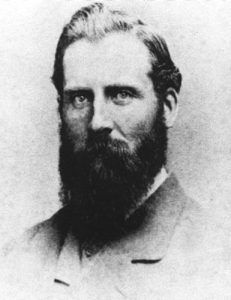 The pioneers were right to have been wary of the trip beyond Diamond Spring. During the 1850s, this portion of the trail was often called the “Journey of the Dead” because of the frequent Indian attacks and short water supplies. A group of U.S. Dragoons encamped just east of the springs in 1852 saw this first hand when they found themselves surrounded by Indians, who nearly destroyed the camp by starting a prairie fire nearby. Colonel Percival G. Lowe described the attack as follows:

“Returning from a trip to the forts along the border in the fall of 1852, nothing of special interest occurred until we reached Diamond Springs. The weather had been frosty at night and the days sunny, but the grass was dry as powder. All day we had seen little bands of Indians a mile or two off the road, traveling in our direction and watching us. This was the Kaw country, and no other Indians were there. Of course, the Kaw knew our troop, and they had no love for it, but we were slow to believe they would attack us.

We camped on the higher ground east of Diamond Springs on the south side of the road. We had finished dinner about two hours before sunset when a fire broke out in a circle all around us, not more than a mile from camp. A stiff gale was blowing from the south, and when we noticed it, the fire in the tall grass was roaring furiously, and the flames were leaping twenty feet high. Every man used a gunny sack or saddle blanket and worked with desperate energy. The utter destruction of the camp was imminent, and we faced the fire like men who had everything at stake. Success was ours, but the battle left scars on nearly all. I have never seen fifteen minutes of such desperate work followed by such exhaustion.” 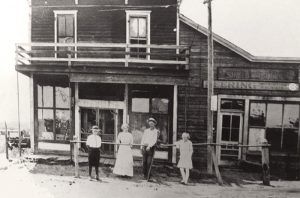 Still, the Pioneers continued to come, so much so that a post office named Diamond Springs was added in July 1859 with George C. Newberry as the first postmaster.

During the Civil War, on May 4, 1863, the stage station was attacked and robbed by Missouri Bushwhacker Dick Yeager, a William Quantrill confederate. During the raid, the station manager, Augustus Howell was killed, and Mrs. Howell was severely wounded. The renegades then set the station on fire and fled east. The station was never rebuilt and was moved to Six Mile Creek, so named for its distance from Diamond Springs. The spring, however, continued to be a valuable water source and popular campsite as long as the Santa Fe Trail was active in this vicinity.

Traffic on the Santa Fe Trail was beginning to dwindle by this time. In 1865, Samuel A. Kingman, after passing by the deserted station, recorded: 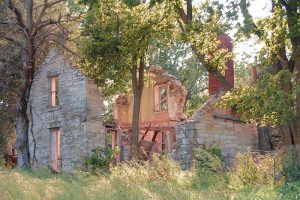 Ruins of a stone building at Diamond Springs, Kansas, by Kathy Alexander.

“We passed Diamond Springs. The remains of three buildings of stone two stories high tell their story of violence. A good monument for the builder. A small room used as dramshop is all that’s left fit for use save a large stone corral surrounding 5 or 6 acres with a small supply of hay.”

Some years later, another settlement was established at the spring, also called Diamond Springs. A station along the Strong City & Superior Division of the Atchison, Topeka & Santa Fe Railroad, a post office opened in August 1868. It became a minor shipping point for the surrounding agricultural area, and in 1910, it had a population of 27 people. The post office closed in 1930, and sometime later, the area was sold and utilized as a large ranch, which it continues to be used as today. The old townsite is marked only by a couple of private homes, a few stone ruins, and an old cemetery.

The spring now rises in a concrete cistern and is piped to a nearby concrete stock tank on the Diamond Spring Ranch. It is designated by a marker but is located on private land.

The site is accessed by taking U.S. Highway 56 west from Council Grove about 13.5 miles to the junction with Kansas Highway 149, turn south about .5 miles. The site is at the crossing of the Santa Fe Railroad tracks. 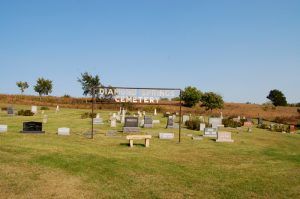