Like many historic places across America, Gilpin County, Colorado is allegedly haunted. 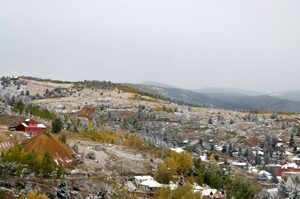 Founded in 1859, Central City quickly acquired the reputation of being in the middle of “the richest square mile on earth.” As many as 30,000 miners flooded the area in search of their fortunes but by the end of its second year, most of the placer gold was gone and hard rock mining began. The settlement’s population ebbed and flowed with the building of new mines and survived through the 1870s and 1880s.

However, by the early 1900s, Central City was becoming a virtual “ghost” as buildings were dismantled – the lumber and materials shipped to more thriving settlements.

By the 1920s the settlement had only about 500 residents. Struggling along as a tourist town for years afterward, the town regained some prosperity with the passing of legalized gambling in 1991.

However, the nearby town of Blackhawk, nearer to the highway, benefited most from the new law and Central City continued to struggle along. However, the benefit to Central City is that most of its historic buildings remain intact. Central City, although inhabited by the living, is also said to remain home to a number of lingering spirits.

Masonic Cemetery – Every April 5 and November 1, it is said that a beautiful woman in a black satin dress appears and lays flowers on the grave of John Edward Cameron. There are many different rumors for the connection between this ghost and Cameron, who died on November 1, 1887. At one time, twelve people gathered at Cameron’s grave on November 1 to see the ghost. They were not disappointed — at sunset, the woman appeared as always, but when two of the men tried to grab her, she flew off and vanished on a hill not far from the cemetery. The hilltop cemetery is north of the city. 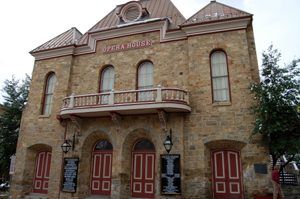 The Opera House —  One of the more famous landmarks in the old mining town is the Central City Opera House. Here, some of Colorado’s finest troupes of entertainers performed, and some have seemingly stayed on to perform long after the troupes have left. Built in 1878, the national historic Opera House has hosted performances for well over 100 years. Unfortunately, shortly after its opening, the Central City mines played out and the Opera House fell into disrepair. However, many years later the 550-seat Opera House was saved by a volunteer effort in 1932. Restoring the Opera House to its former grandeur, performances were brought back to the old Opera House for summer festivals that continue to this day.

Among the remaining troupes of the Opera House was s a miner turned stage performer by the name of Mike Dougherty, who was a favorite in 1865. Unfortunately, like many residents of this rough and tumble frontier town, Dougherty drank himself to death. Apparently, Mike’s love of the stage has caused him to linger.

Over the years, numerous back-stage visitors have reported being nearly overwhelmed with the strong (but fleeting) odor of alcohol, which is sometimes accompanied by a stout nudge on the shoulder, or by their hair being lightly ruffled from behind. While Dougherty seems to be a friendly ghost, the living are always considerably startled when they turn to look and realize that they are alone in the darkened corridor.

Other reported occurrences have included strange flickering orbs of light that seem to float across a darkened stage and then vanish into the wings. The distinct sound of footsteps is also heard in the balcony, thought to be those of a long-departed female patron, Occasional cold spots have been felt which move from one corner to the next backstage. Nearly all of these occurrences have been reported when the theater is dark and not in use for performances.

Teller House – This historic building is one of the few that survived the 1874 Central City fire. Built at a cost of $84,000 in 1872, the owners spent an additional $20,000 for furnishings, making it the finest hotel (outside of Denver) west of the Mississippi. In the beginning, the rate for this luxury hotel was 50 cents per night plus an additional $2.50 tariff. President Grant visited Central City and the Teller House in 1873 and again in 1876. For his 1873 visit, a path of silver ingots valued at $12,000 was laid from his carriage to the front door of the hotel as a “welcome mat.”

This building houses the famous and mysterious “Face on the Barroom Floor” painting, done by Herndon Davis in 1934. This lovely painting is carefully maintained today.

Legend has it that the woman’s likeness was painted by a distraught miner when his wife died of consumption (tuberculosis.) As the story goes, the miner drank himself into a stupor and then proceeded to paint his wife’s portrait on the floor. Speaking tenderly of her, he painted long into the night and on past noon the next day. Once the artist was finished, he slept, never to wake again. Buried next to his beloved wife, witnesses say that on the anniversary of his death, the couple can be heard talking tenderly to each other through her portrait on the floor.

Unknown Cemetery – There are at least four cemeteries in Central City. One of these old cemeteries holds the remains of a woman who was determined to be a witch by her peers.  If you can find the grave, it is said that if one stands just a few yards away, a green mist will surround the area. Further, witnesses purport that if the lighting is right, hundreds of maggots will cover the ground.

Reader Update: In the cemetery, I have a picture of a man standing in the trees just watching us take his photo. I also saw an old lady next to the broken pillar behind the cemetery and three orbs on the foundation by the front gate. On another occasion, a little girl appeared in the trees next to her grave. I have been seeing these types of spirits since I was three years old. – Julia, April 2005. 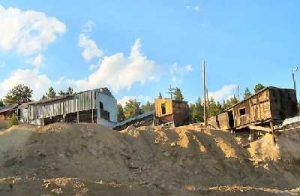 Gold Mine Road — Though “they” don’t give this road a name nor call it the “Gold Mine Road”, I called it that for lack of a better description. This is a personal experience as I traveled along this road southwest of Central City, past the cemeteries leading to Nevadaville, past Russell Gulch and on to Idaho Springs. My traveling companion on this trek was known to me to be a ”ghost magnet.”

Though he had shared many uncanny experiences with me about his insights and feelings; he himself was uncomfortable with his ability. As we traveled the road, I, of course, continued to insist that we stop for photo opportunities. Mesmerized by the beauty of the area and the history facing me, I could have spent an entire day.

I could tell that my companion was getting increasingly agitated, and finally, he turned and said to me:  “There are too many dead people here, we are leaving!!”  So, we reversed ourselves and I quickly found myself sitting in a small tavern in Central City. Later, my companion would only say that those hills were filled with the “dead.” He wouldn’t say more, but I would love to venture those hills again with another “ghost magnet” that is willing to talk.