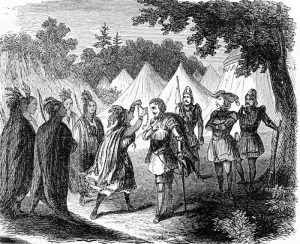 The Cheraw were an important tribe in their region who were probably of Siouan stock. They formerly ranged east of the Blue Ridge, from about present-day Danville, Virginia southward to the neighborhood of Cheraw, South Carolina.

Though they were once almost as large as the Tuscarora tribe in North Carolina, they are less prominent in history because they were almost completely gone before the white settlements had reached their territory. The Cherraw were first mentioned by Hernando de Soto in 1540 under the name of Xuala, a corruption of Suali, the name by which they are traditionally known to the Cherokee, who remember them as having anciently lived beyond the Blue Ridge.

Some years later, but previous to 1700, the Cheraw settled on the Dan River near the south line of Virginia. About a decade later, they were being so harassed by the Iroquois and abandoned their home on the Dan River and moved southeast to join the Keyauwee. However, when the North Carolina colonists became dissatisfied at the proximity of Indians, Governor Eden declared war against the Cheraw. The war was carried on against the Cheraw and their allies until the defeat and expulsion of the Yamasee in 1716. At the close of the Yamasi War the Cheraw were dwelling on the upper Pedee River near the line between the Carolinas.

By 1715, they were estimated to have numbered about 510, but this number probably included the Keyauwee. As they were still subject to attack by the Iroquois, they finally incorporated into the Catawba tribe between 1726 and 1739. They are mentioned as with the Catawba but, still speaking their own distinct dialect as late as 1743. The last documentation of them was in 1768 when they had been reduced by war and disease to 50 or 60 people and were still living with the Catawba.

The tribe is extinct today.