Before the eruption of the Civil War, New Orleans, Louisiana, was in a position of unprecedented economic, military, and political power. In 1860 it had a railroad, one of the greatest ports in the world, with 33 different steamship lines, trade worth 500 million dollars passing through the city, and a population that outnumbered any other city in the South. 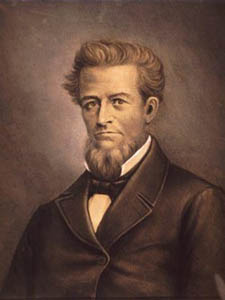 When Abraham Lincoln was elected as president in 1860, Lousiana’s Governor Thomas Overton Moore wanted to make New Orleans a “free city,” or neutral area in the conflict brewing between the North and the South. Even before Louisiana officially declared its succession from the Union, Moore ordered the Louisiana militia to seize the Federal arsenal at Baton Rouge, the Federal Fort Jackson, Fort St. Philip, Fort Pike, which guarded the entrance to Lake Pontchartrain, New Orleans Barracks south of the city, and Fort Macomb, which guarded the Chef Menteur Pass. These military moves were ordered on January 8, 1861. Louisiana officially declared that it had seceded from the United States on January 26, 1861.

The Civil War officially began on April 12, 1861, after Confederate troops fired on Fort Sumter in South Carolina. An early strategy of the Union was called the Anaconda Plan, proposed by General-in-Chief Winfield Scott. To suppress the Confederacy at the beginning of the Civil War, the plan emphasized a Union blockade of the Southern ports and called for an advance down the Mississippi River to cut the South in two. To put the plan in action, the ports of the seceding states were to be rigorously blockaded. The Mississippi River was also to be utilized as a highway to thrust completely through the Confederacy.

One of the first action plans was to take New Orleans, putting the river in U.S. hands from its source to its mouth. After a Union Blockade was established, a Confederate naval counterattack attempted to drive off the Union navy, resulting in the Battle of the Head of Passes. Months later, New Orleans would be taken by the Union. 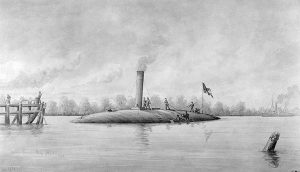 Head of Passes October 12, 1861 – This was a bloodless naval battle that was part of the Expedition to Capture New Orleans. For the Confederates, the prospect of the Union fleet occupying a base at the Head of Passes was intolerable as it would cut New Orleans off from the sea. A naval raid was made by the Confederate river defense fleet, also known as the “mosquito fleet” in the local media, on ships of the Union Blockade squadron anchored at the Head of Passes. Three fire rafts supported the mosquito fleet ignited and followed the ironclad ram CSS Manassas into the action. The attack occurred in the early hours of October 12, 1861, and routed the Union fleet, which fled in disorder down the Southwest pass of the delta. After sunrise Commodore George N. Hollins ordered the mosquito fleet to withdraw upriver. The Confederate victory resulted in no casualties on either side, but the Union had two sloops-of-war and one schooner damaged. One Confederate ironclad was damaged. 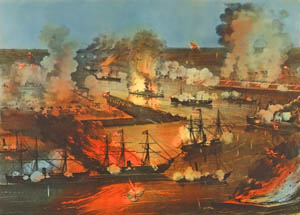 The capture of Fort Jackson and Fort Philip, Louisiana.

Forts Jackson and St. Philip – April 18–28, 1862 – Part of the Expedition to Capture New Orleans, early Union plans had called for the division of the Confederacy by seizing control of the Mississippi River. One of the first steps in these operations was to enter the mouth of the Mississippi River, ascend to New Orleans and capture the city, closing off the entrance to Rebel ships. In mid-January 1862, Flag-Officer David G. Farragut undertook this enterprise with his West Gulf Blockading Squadron. The way was soon open except for the two forts, Jackson and St. Philip, above the Head of the Passes, approximately 70 miles below New Orleans. In addition to the forts and their armament, the Confederates had placed obstructions in the river, and there were several ships, including two ironclads, to assist in the defense. Farragut based his operations from Ship Island, Mississippi, and on April 8, he assembled 24 of his vessels and Commodore David D. Porter’s 19 mortar schooners near the Head of the Passes. Starting on the 16th and continuing for seven days, the mortar schooners bombarded Fort Jackson but failed to silence its guns. Some of Farragut’s gunboats opened a way through the obstruction on the night of the 22nd. Early on the morning of the 24th, Farragut sent his ships north to pass the forts and head for New Orleans. Although the Rebels attempted to stop the Union ships in various ways, most of the force successfully passed the forts and continued to New Orleans, where Farragut accepted the city’s surrender. With the passage of the forts, nothing could stop the Union forces. Cut off and surrounded, the garrisons of the two forts surrendered on the 28th. The Union victory resulted in 229 Union casualties and 782 Confederate. 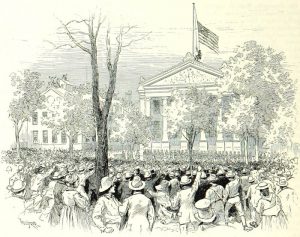 New Orleans – April 24-25, 1862 – Following the passage of Forts Jackson and St. Philip, near the mouth of the Mississippi River, on April 24, 1862, the Union occupation of New Orleans was inevitable. Union Flag-Officer David G. Farragut, with his squadron of 43 ships, continued up the Mississippi River towards New Orleans when they came upon heavy chain cables stretched across the river as a prime defense. However, after demanding the surrender of the City of New Orleans, Confederate General Mansfield Lovell withdrew his 3,000 troops northward. The city surrendered on April 25. On May 1, Major General Benjamin Franklin Butler’s army began landing at New Orleans, and 15,000 Union troops occupied the city. New Orleans, considered an international city and the largest city in the Confederacy, had fallen. However, the “capture” of the city was spared the destruction suffered by many other Southern cities. During the city’s surrender, there were no casualties on either side.

The permanent loss of New Orleans was considered one of the worst disasters suffered by the Confederacy in the Western Theater of the war. The Union occupation of New Orleans had major international significance. The capture was also a turning point in the war, which precipitated the capture of the Mississippi River.