Upland, California – At the Base of the Foothills 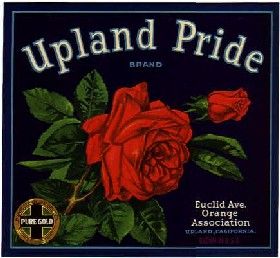 Soon you will arrive at Upland, which was first called North Ontario when George and W.B. Chaffey arrived in the area in 1882. Immigrating from Canada, the pair sought to build a new colony and found the perfect place on the lush and fertile ground set against the foothills of the San Gabriel Mountains.  After purchasing the land, they began to plan their new settlement. In May 1906, the city was officially incorporated with the name of Upland. The area was quickly transformed into a thriving agricultural center, with most of its population involved with the production, shipping, or processing of citrus fruit and grapes.

Today, Upland has developed into a residential and retail community that continues to retain its charm from the past.

While in Upland, a great neon sign can be seen at the Taco King at 1317 E. Foothill Boulevard and a classic 1950’s style McDonald’s stands on the southeast corner of Benson Avenue at 1590 Foothill Boulevard. These classic arches are one of the few that remain from our vintage past.

An absolute “must stop” in Upland is the vintage Buffalo Inn, where buffalo burgers have been served since 1929. Here, in this frontier saloon atmosphere, you can enjoy a burger and a brewsky in a laidback atmosphere before continuing your journey westward. The Buffalo Inn is located at 1814 W. Foothill Boulevard.

Getting nearer and nearer to downtown Los Angeles, Claremont is just some thirty-five miles this side of the city center. Best known for its seven colleges, tree-lined streets, and historic buildings, the town began as one of the many town sites that were laid out between San Bernardino and Los Angeles by the Santa Fe Railroad in 1887.

The same year, the first of the city’s colleges – Pamona College was established. The “New England style” school became the center of the community that grew up around it, reflecting much of the founders’ New England heritage.

Citrus ranches soon spread out around the college and before long the town sported four citrus packing houses. In addition to its many orchards, the town also began to build more and more colleges, until today, the Claremont Colleges Consortium includes five undergraduate colleges, two graduate institutions, and a central organization that provides services shared by all students, faculty, and staff.

The orchards continued to thrive until after World War II when demand for residential development caused many growers to sell their land. Today, the town, with a population of about 35,000 residents, displays its heritage in its many historic buildings which provide a wide variety of architectural periods. 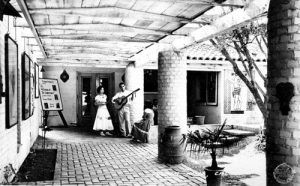 While in Claremont you can visit the Rancho Santa Ana Botanic Garden on the right side of Route 66 just before the intersection with Indian Hill Boulevard.

Just beyond sits the Claremont Griswold Center at the northwest corner of Indian Hill and Foothill Boulevards. Here, you can find a theatre, art, shops, and restaurants in a 1911 Art Deco school building.

While not on Route 66, Claremont’s Padua Hills Theatre is a California Landmark catering to visitors since 1930. Built as a centerpiece for local artists, the Spanish-Colonial building entertained its patrons up until the early 1970s when the City of Claremont purchased the property. Today, it serves as a banquet and meeting facility sitting on six acres of land amongst olive trees, a beautiful central courtyard, and magnificent landscaping. This historic building is located north of Route 66 at the base of the Claremont Hills Wilderness Park at 4467 Via Padova.

As you continue on, Foothill Boulevard curves slightly to the right when entering Pomona, California. The city of Pomona began as a Mexican land grant to Don Ingacio Palomares and Don Ricardo Vejar in April 1837. That same year, Palomares and his wife , Dona Concepcion Lopez de Palomares, completed their first home, which continues to stand today as a museum called La Casa Primera de Rancho San Jose. After living there for 17 years, the couple built a grander home a mile north of the first house. The 13-room adobe home served as a way station along the San Bernardino Stage and 20- Mule Team freight routes. Called the Palomares Adobe, it too continues to stand today. Both historic homes have been preserved and can be visited on Sundays.

In 1863, Don Vegar sold his portion of land to two men from Los Angeles, who in turn, sold it again to Louis Phillips in 1866. Phillips sold 5,600 acres to a group of speculators in 1875, who began to develop the townsite, naming it “Pomona” after the  Roman goddess of fruit. In that same year, Louis Phillips built the first brick house in the Pomona area, which continues to stand today as a museum.

Like the many other towns of the area, vineyards, olive groves, and citrus orchards flourished in Pomona until demand for new homes created more and more developments. Today, the city prides itself on its rich history, diversity and commitment to continuous improvements. Pomona offers numerous glimpses of its vintage past in both public and commercial buildings in a variety of architectural styles. One great view of the past can be found at the Pomona Fox Theater located at the corner of Third Street and Garey Avenue. Opened in April 1931, the theatre served as the venue for several Hollywood movie premiers in its early days.  Continuing to entertain the public for decades, the suburbanization of Southern California took its toll on the Fox. Falling into disrepair, the Fox was closed and the building served as a church before being leased out for wrestling matches and rave parties. With its “undesirable” location, the historic theatre soon became the site of gang-related killings until the City of Pomona stepped in and bought the building in 2000. Listed on the National Register of Historic Places, plans are underway to restore this premier example of Art Deco architecture.

On 2nd Street, just east of Garey Avenue, you can find a newly revitalized shopping district called Antique Row. Here sit more than a dozen stores that feature hundreds of antique dealers. Across the street is the Art Colony, which houses artists’ studios, galleries, and shops featuring one-of-a-kind items.

La Verne began in 1887 as the City of Lordsburg as one more town along the Santa Fe Railroad. In fact, it was Isaac W. Lord, a Los Angeles businessman, who persuaded the railroad to extend its line through the area, where he owned a significant amount of property.

When the railroad was completed, Lord sent brass bands up and down the streets of San Bernardino and Los Angeles inviting people on a free ride to the new town of Lordsburg.   On May 25, 1887, over 2,500 people arrived for Lord’s land sale, the largest in Southern California up to that date. Lord pocketed $200,000 from the sale of lots, and the building of new homes and businesses began almost immediately.

The town promoters installed water mains, a post office, a newspaper, and construction on the 60 room Lordsburg Hotel was begun, all within the first four months. Lord spent $300,000 on the palatial, 96-foot high hotel that featured cupolas, balconies, domed rooftops, and an electric bell in every room.

Though situated adjacent to the railroad for the convenience of travelers, by the time the hotel was completed the land boom had gone bust and the beautiful hotel never hosted a single paying guest. The hotel’s failure forced Lord to place the building up for sale in 1889. Four German Baptist men bought the vacant hotel with plans to open it as an academy. In the fall of 1891, Lordsburg College was established with 135 students and the town soon drew more and more Brethren people.

Though the town bore his name, Lord was not well-liked by the residents, and in 1912; they tried to change the name of the community. However, the narcissistic non-resident landowner blocked the attempt. However, five years later when Lord died, the citizens voted to change the city name to “La Verne,” after the northern orange-growing district, and a large celebration was held to honor the event. The Lordsburg College also changed its name, today known as the University of La Verne.

As the college continued to grow, it moved into Founder’s Hall and the original Lordsburg Hotel was torn down in 1927. 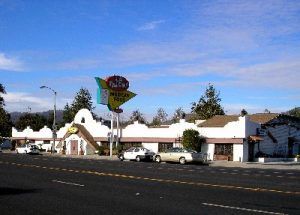 In addition to the college, most of the economy of the fledgling city was supported by the citrus industry. However, by the 1940s, the quality and size of the fruit had dramatically declined and groves began to be sold for housing developments.

Today, La Verne supports about 30,000 residents, retaining much of its small-town charm on its tree-lined streets. As you enter La Verne, look for Route 66 signage at the Hi-Brow 66 Lounge and Coates Schwinn in the 500 block of east Foothill Boulevard, and just a couple of more blocks down the road a vintage sign advertising the Village Car Wash.  Other Route 66 stops include the Route 66 Territory Gift Shop at 2418-D Foothill Boulevard where you are sure to pick up a memento of your trip. If you’re hungry for a taste of Mexican food, the La Paloma Restaurant at 2975 Foothill Boulevard has been serving Mother Road travelers since 1966.

To the Urban Sprawl