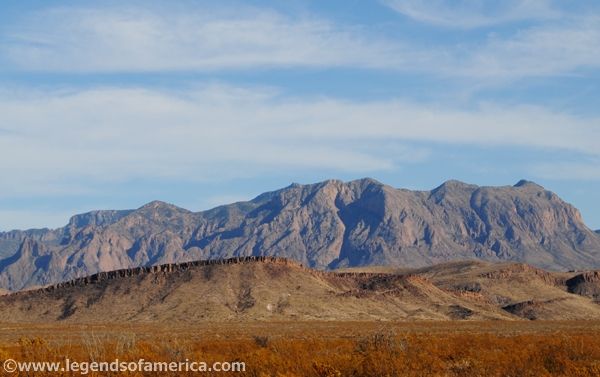 Located in the rugged Big Bend country of  West Texas is the Lost Bill Kelley Mine. This remote and forbidding landscape in the Chihuahuan Desert has long been associated with mystery and hardship as early pioneers often died or disappeared in its arid, impassable mountains — killed by the Apache or Comanche Indians who called it home, encountered Mexican raiders or dangerous outlaws that hid within its steep canyons, succumbed to the venom of a poisonous snake, or got lost within these vast desert mountains.

Lying somewhere in this remote country, the Bill Kelley Mine was not only said to have been one of the richest in all of North America but also was cursed, as many of those who claimed to have found the gold or were close to discovering its location, often died a violent death.

In 1884, the four Reagan brothers, John, Jim, Frank, and Lee, established a cattle ranch near Reagan Canyon in southern Brewster County. On numerous occasions, the Reagans drove their cattle to the Southern Pacific Railroad at Dryden, Texas, a rugged 75-mile journey to the northeast.  During one of these cattle drives, the Reagans met Billy Kelley, a Seminole-African American man who was trekking from the old Indian settlement in northern Coahuila, Mexico, looking for work in the ranch country of West Texas.

Though only 19 years old, dressed in rags, and unable to read or write, he convinced the brothers that he was experienced with horses and the ranch owners hired him. Proving to be as good as he claimed, the Reagans soon allowed Kelley to care for the stock on his own. On one of these occasions, when Kelley was rounding up strays on the Mexican side of the Rio Grande, he stumbled onto a gold mine. Upon returning to the ranch, he told the Reagans of his find, but they only laughed at him.

The next day, Kelley, along with Lee Reagan, was again rounding up stray horses near the location where Kelley said he had found the mine. Near the end of the day, Kelley told Reagan they were close to the mine that he had found and offered to take him there. Once again, Reagan only laughed. So, Kelley retrieved a fist-sized piece of quartz from his saddlebag, showing Reagan the rich gold vein that ran through it. Reagan, obviously not familiar with gold, scoffed again, tossing the quartz to the ground and telling Kelley to focus on his job rather than looking for gold mines.

Undaunted, Kelley knew what he had found and a few weeks later took a train bound for San Antonio, where he began to visit with the train conductor, a man named Locke Campbell. He told Campbell about the mine and even provided him with a piece of quartz as proof. Kelley’s newfound friend promised he would have the gold evaluated and would be in touch. In the meantime, Kelley also took a piece of the quartz to an assayer, who promised to send the results to the Reagan Ranch.

Kelley then returned to his work, and after several weeks, while he was out on the range, a letter came for him from the assayer. Not believing that Kelley could read, the Reagans opened the letter to discover that the gold that Kelley had found was valued at $80,000 to the ton.

When Kelley returned to the ranch three days later, the cook told him that the brothers had opened his letter and read it. Nervous, Kelley feared that the Reagans would want him to lead them to the mine, where they would then kill him. As a result, he stole a horse and disappeared southward. The Reagans tracked him for two days but finally gave up the search as the tracks crossed the Rio Grande into Coahuila, Mexico.

Next, Kelley went to work on the Piedra Blanca Ranch owned by George Chessman in Coahuila, Mexico. After a while, Kelley grew to trust his foreman, John Stillwell, and related the tale of the lost mine and showed him a saddlebag filled with gold nuggets. He also told Stillwell that he was afraid for his life and was thinking about returning to his relatives at the Seminole settlement in Coahuila.

A short time later, after Kelley and other ranch hands had driven a herd of cattle to Mexico City, Kelley disappeared. Later, it was found that he had returned to his Seminole settlement for a time before moving north to Oklahoma. There, he was imprisoned for illegal bootlegging. After his release, he moved to San Antonio, where he lived until his death.

In the meantime, Locke Campbell, the conductor Kelley had met on the train, had begun to look for the mine. Ironically, at a cattlemen’s convention in San Antonio, Campbell met Jim Reagan, and the two exchanged their stories of Bill Kelley’s lost gold mine.  Campbell soon paired up with the Reagan brothers and began to look for the mine. Though they searched for several miles in each direction from the place where Lee and Kelley had rounded up strays, they could not find anything. However, the Reagan brothers continued their search for years, investing thousands of dollars in their efforts.

Around this same time, a black man appeared at a store in Eagle Pass, Texas, wanting to exchange a bag of gold nuggets and information regarding the location of the mine for $1,000. However, the storekeeper refused, only to find out that the man had been Bill Kelley several months later.

In June 1899, Jim Reagan partnered with ranchers D.C. Bourland and O.L. Mueller and a prospector named John Finky to search for the mine. While the ranchers provided the financing, Finky’s job was to find the mine, and the five men would share in any proceeds.

After many weeks of searching, Finky arrived at the Bourland ranch, announcing he had located the mine and produced several large chunks of gold. He also stated that he had found the long-dead body of a black man in a remote canyon some 300 yards below the mine. That very night, Finky was stung by a scorpion and had to be taken to a doctor in Sanderson. There Finky was hospitalized, where Bourland and Reagan visited him, trying to get him to reveal the location of the mine. Not trusting the ranchers, Finky refused and told them that the group would have to get permission from the Mexican government to work the mine.

After his recovery, Finky planned to travel to Mexico City to gain the proper permission. On the way, he stopped in El Paso, where he spent two days drinking at a saloon. Making friends with the bartender, Finky told him about the Lost Bill Kelley Mine and invited him to accompany him to Mexico City. Two days later, Finky was found dead.

Shortly afterward, Jim Reagan died, and his brothers eventually moved their ranching operations to Arizona. Locke Campbell continued to search for the mine until he died in 1926.

In 1909, a man named Wattenburg arrived in the Big Bend area with a map reputedly showing the location of a gold mine in the Ladrones Mountains. Wattenburg claimed that the information came from his nephew, who was condemned to death in an Oklahoma prison. According to the tale, while stealing horses in Mexico, his nephew and his outlaw companions had come across an older man carrying two leather sacks filled with gold-laden quartz rock. When they threatened the older man, he took them to the mine. With a posse close behind them, they killed the old miner, threw his body into a canyon, and fled.

In Wattenburg’s search, he met John Young, who was familiar with the Ladrones Mountains and Reagan Canyon. The pair soon partnered along with another man named Felix Lowe, to look for the mine. In 1910, while they were searching for the mine, the Mexican Revolution broke out, and with the border teeming with armed men, they abandoned their search.

Several months later, Young was interviewed by a San Antonio newspaper and told the entire story of the lost Bill Kelley Mine. Jack Haggard, a rancher in Coahuila, read the story and wrote a letter to Young. He told him that Kelley worked on his Mexican ranch for several years and that one of his foremen had found the mine using Kelley’s directions. The foreman had returned with several ore samples that were assayed as rich in gold. However, the foreman had been killed in a gas explosion shortly after his return. Haggard also told Young that he, too, was searching for the mine. Years later, Haggard was preparing for another expedition to the Ladrones Mountains when he was drowned in a fishing accident.

Another man searching for the mine was Will Stillwell, Kelley’s old foreman at the Piedras Blancas Ranch. In 1915, Stillwell told his brother, Roy, that he had found the mine. Though Stillwell may have been working the mine, he had also joined the Texas Rangers. Assigned to a post in the Big Bend area, he was shot in the back by a Mexican outlaw in 1918.

Afterward, Roy Stillwell, Will’s younger brother, came into possession of the directions to the Bill Kelley mine. Though several men asked Roy to lead an expedition to find the mine, Roy steadfastly refused, telling them all that the mine was cursed and pointing out the number of violent deaths associated with those who claimed to have found the gold or were close to discovering its location. 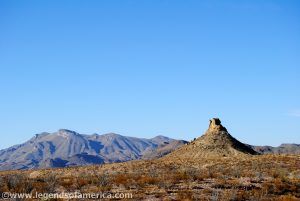 Several months later, another group of men offered Roy a large amount of money if he would provide the directions to the mine. Responding that he wanted a few days to think about it, Roy was killed two days later when a truck overturned on him.

In the late 1940s, two mining engineers from the east arrived in the area of the old Reagan Ranch. Hiring a local guide, they never said what they were looking for, but the guide assumed it was the Lost Bill Kelley Mine. According to the guide, the pair was very excited one day about something they found, paid him off, and told him his services were no longer needed. The guide always felt that the pair had found the mine. However, the two miners were never seen leaving the mountains and never returned to their homes in the east.

The location of the Bill Kelley Mine is said to be in the mountains on the Mexican side of the Rio Grande, south of Big Bend National Park. Those who allegedly found the mine said it is on a ridge some 300 yards up a canyon wall. In the canyon are the stumps of several petrified trees, beyond which is a large boulder. Somewhere above this boulder is supposedly the Lost Kelley Mine.