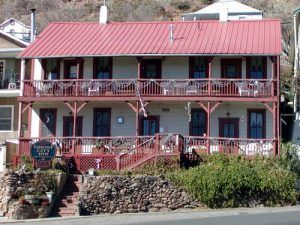 The Ghost City Inn, like many haunts in Jerome, Arizona lives up to its reputation with a spirit or two lurking behind its historic façade. Originally the building was built as a boarding house for middle mine managers, but over the years has seen a variety of uses. Later, it became a private residence for the Garcia family who owned it for more than fifty years. The building also served as a restaurant, a spiritual retreat, a funeral home, and an art gallery over the years.

However, in 1994, the building underwent a major restoration to turn it into the Bed and Breakfast that it is today. Though the building is a peaceful respite, Jerome tourists are allegedly not the only ones who enjoy its ambiance.

Allegedly, the historic building is said to remain home to a female spirit who is most often seen in the Cleopatra Hill room. Another male spirit has been spied in the hall outside the Verde View Room. Other unusual things occur at the inn, including doors slamming shut by themselves and spectral voices heard when no one is in the building. 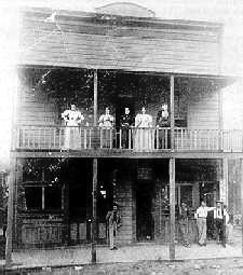 Below Main Street, as you enter Diaz Street is the Cribs District, more affectionately called “Husband’s Alley” during its heydays. During Jerome’s more decadent times, brothels and bordellos could be found anywhere.

However, when the town decided to be more “civilized,” these houses of business were banned from Main Street and most relocated to the Crib District, which was filled with numerous women more than happy to provide “entertainment” to the many miners of the rowdy city. At one point, it was estimated that more than 100 prostitutes plied their trade in Jerome, with such notable madams as Nora “Butter” Brown and Jennie Bauters. Madam Brown was known as a no-nonsense businesswoman and was Jerome’s first madam, owning the first brothel of the camp in a two-story wooden building, located where the Sullivan Building stands today.

Though nothing to look at herself and having a reputation of being able to drink most men under the table, Madam Brown did a brisk business.  She was fond of saying, “I know I’m not much to look at boys, but wait until you see the girls. You’re really going to love me then.” She would then let out a loud horse laugh. She was right about her not being much to look at.” And true to her word, the women that worked for her were some of the loveliest in town. Even Nora, though plain of face, her figure beckoned to the female-starved men of the camp. Brown is credited for being the first to introduce Jennie Bauters to the lifestyle, who is sometimes credited with being Jerome’s first madam. Jennie, who operated her business in what is now the Mile High Inn, was obviously not the first, but she did go on to become the most popular madam and one of the richest women in Arizona. Besides Madams Nora Brown and Jennie Bauters, other popular madams in the city included such lively monikers as Rose Lily, Cuban Mary, and Madam Pearl, who was never seen without a cigarette dangling from her lips.

For those women who didn’t do so well, or weren’t pretty enough to work in one of the more ”respectable” brothels, they plied their trade from small shacks that lined the alley, referred to “cribs.” Both “high class” brothel operations and cribs remained a mainstay in Jerome long after they were made illegal, continuing to operate into the 1940s.

Today, when visitors wander through this historic alley, it is easy to imagine hearing the voices of “soiled doves” calling from their long-vanished cribs. For some; however, they are sure that a number of these “old girls” continue to linger here.

In this alley, many have reported paranormal phenomena including the feeling of being watched, the sounds of phantom footsteps, a persistent odor of perfume, and strange shadows that move around at night.

The life of a prostitute during Jerome’s heydays was difficult and dangerous and a number of women lost their lives to the men they “entertained,” one of which was a stunningly beautiful girl named Sammie Dean who was strangled by a customer. To this day, her murder remains unsolved. Whether it is the beautiful Sammie Dean or any number of other nameless girls who lost their lives in this alley, some are said to continue to haunt this once ribald street.

You can find this area across the street from the English Kitchen, the oldest continuously operating restaurant in the state of Arizona. 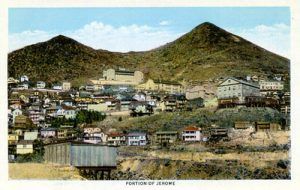 Just below the hotel on Cleopatra Hill is an abandoned building that was once a clinic. It was here that many of those killed in the 1917 flu epidemic lost their lives. The building has long since had a reputation for being haunted over the years, as numerous tales are told of former patients being seen in the windows of the abandoned building. Further down the slope stands the old Episcopal Church, where a white misty figure has often been seen.

Beneath the streets of Jerome, the mountain is still filled with several abandoned mine shafts and tunnels. These too are said to be haunted, especially by a miner dubbed “Headless Charlie.” Decapitated in a mining accident years ago, “Charlie’s” head was found but his body was never discovered. Almost immediately after his death, miners began to report hearing unexplained footsteps, seeing unexplainable footprints and seeing and a shadowy headless spirit. Many believe his spirit continues to stalk the dark tunnels beneath the city.

With all the other apparitions wandering about this historic town, the cemetery, of course, includes its own paranormal activity. Visitors here have made numerous reports of dark figures moving about, the sound of ethereal footsteps, and the sounds of distant voices. The old cemetery includes graves dating from 1897 to 1942.

Jerome is allegedly filled with so many spirits of the past that it affectingly known as “Ghost City” and has made many a visitor and resident, who were previously skeptics, believers in the paranormal.

Sleeping With Ghosts in Arizona