Joseph City, Arizona, located just about 11 miles west of Holbrook on Route 66 is an unincorporated community in Navajo County.

Little Colorado River in Arizona by the Department of Interior.

This area along the Little Colorado River was first settled by Mormon pioneers led by Captain William C. Allen in 1876. Joseph City was first called Allen’s Camp, for their leader. One of the settlers first tasks was to build a U-shaped fort of cottonwood logs. They were also focused on getting water for their crops and built a dam and irrigation canals the same year. However, taming the capricious river would be difficult, as over the next several decades the settlers watched in despair as the dams washed out and their crops amounted to nearly nothing. Not just one or two times, mind you, but 10 times before a dam was successfully built in 1894 that was strong enough to withstand the floods. This led Andrew Jensen, a Morman church historian, to call the settlement “the leading community in pain, determination and unflinching courage in dealing with the elements around them.”

In 1878, the town’s name was changed to St. Joseph in honor of Joseph Smith, the Mormon prophet, and a post office opened the same year. In 1883, the Atlantic and Pacific Railroad, which later became part of the Atchison Topeka & Santa Fe Railway, reached the area and a railroad station was established.

Soon, the threat of Indian attacks abated and the old fort was then utilized for various purposes until it was completely abandoned in 1896. Afterward, it fell into ruins and there are no remains today, but the site is marked with a bronze plaque in a petrified wood monument on Main Street. 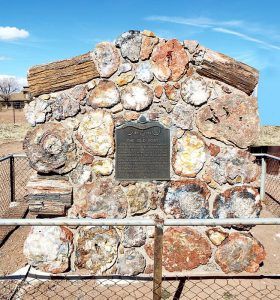 Marker at the site of the old Mormon fort in Joseph City, Arizona. 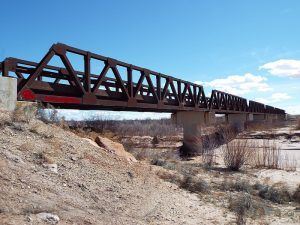 In 1913, the National Old Trails Road reached Joseph City, which would later become Route 66. To accommodate the traffic on the new road, Navajo County began to make plans to build a bridge over the Little Colorado River. The St. Joseph Bridge was completed by June 1917. The six-span Pratt pony truss bridge is 500 feet long and 12.5 feet wide. It served travelers for decades before it was replaced by a newer bridge in 2010. However, the old bridge continues to function as a county-road bridge. Listed in the National Register of Historic Places, it is located on Obed Road 4.4 miles southeast of Joseph City.

In 1923, the town’s name was changed again to “Joseph City” to avoid confusion with another station named St. Joseph along the Santa Fe Railroad in Missouri. The same year, the previous dam built over the Little Colorado River finally gave way after 29 years, forcing area residents to build a new one. This structure continues to stand today. 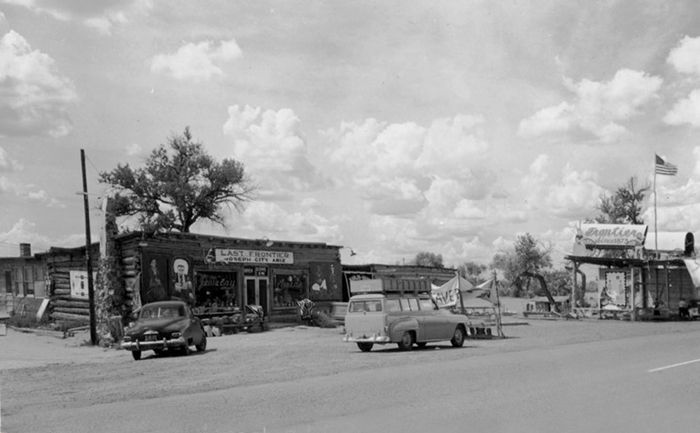 By this time, three other Mormon settlements that had also been established along the lower Little Colorado River at the same time had all but disappeared. These included the old towns of Brigham City, Sunset, and Obed.

Route 66 came through the area in 1926 along the path of the Old Trails Highway. One of the first businesses to be established along the new highway was San Diego’s Old Frontier Trading Post in 1927. The trading post was built by Frederick “San Diego” Rawson out of telephone poles. Born in 1858, Rawson spent a couple of years of his childhood enslaved by Plains Indians before being rescued by the US Cavalry. Later, he worked as an Indian scout, trapper, wagon freighter, circus clown, prospector, cowboy, and author. When he first arrived in Joseph City, he operated a small museum to exhibit his collection of Old West artifacts. However, business was too slow so he then moved to the west end of town where he opened the trading post. At his store, he offered space on the premises for Navajo Indians to make their jewelry, blankets, and quilts. 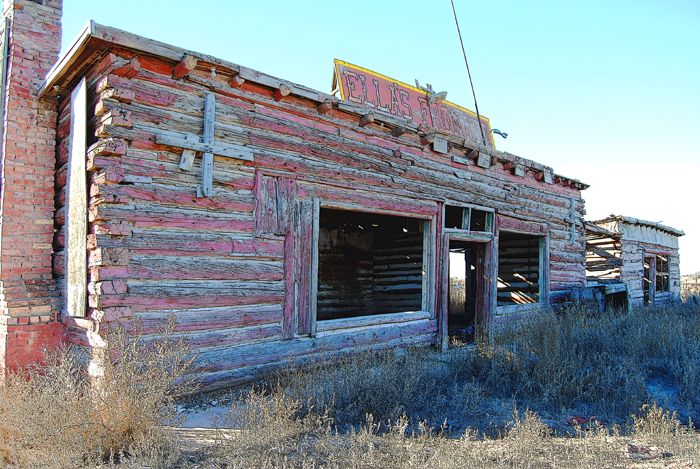 After 20 years in business, Rawson sold the trading post to Ramon Hubbell, son of the famous Indian trader Don Lorenzo Hubbell, in 1947. A few years later, in 1951, it was sold again to Ray and Ella Blackwell Meany, who owned the Hopi House Indian Trading Post west of Winslow. When the two divorced in 1955, each ended up with one of the trading posts. Ella then rebranded the trading post in Joseph City and operated it as “Ella’s Trading Post” until her death in 1984. A former student at the Julliard School, Ella kept a piano in the store, which she claimed was established in 1873, making it the oldest such establishment on Route 66. Ella, however, was considered quite an eccentric among the locals who said that she talked to imaginary people and animals and doubted her claim to the date of the building. Next to the ruins of Ella’s Trading Post are the remains of the long-abandoned Big Arrow Campground.

Joseph City remained a quiet stop for services along Route 66 until after World War II when people really began to travel and traffic increased through the small town. When Jack DeVere Rittenhouse published “A Guide Book to Highway 66” in 1946, he mentioned that the community supported a population of 308 residents and boasted two motels, including the Hopi Village and the Oasis. 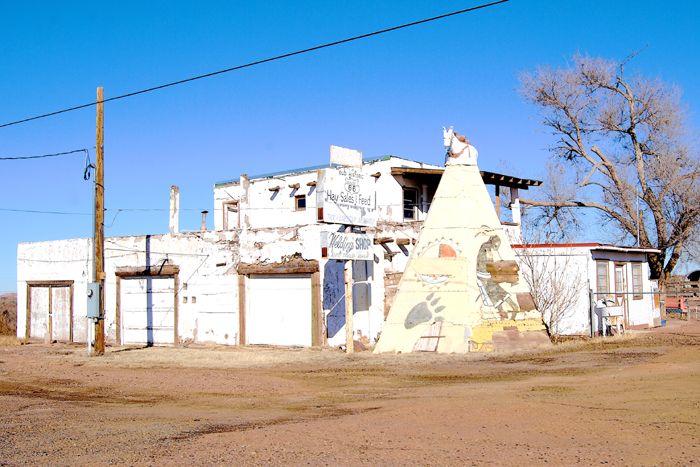 Hopi Village operated as a motel, cafe and trading post on the west end of Main Street. When the original owners sold out, it reopened as Howdy Hanks and greeted visitors with a painting of a cowboy on its side. Howdy later sold the store to V.P. Richards who in turn sold it again, to Max Ortega. Ortega renamed it “Sitting Bull’s Indian Store”. After Route 66 was replaced with I-40, business waned and the trading post closed. It later was used as a feed store and a welding shop. The building still stands with its main feature in front — teepee with a legless horse placed on its tip.

When Route 66 was at its peak, another hardy man named James Taylor built the Jackrabbit Trading Post in 1949. Though Taylor wasn’t originally from Joseph City, he showed the same determination in making his business a success as the citizens of Joseph City had earlier displayed in saving their town. 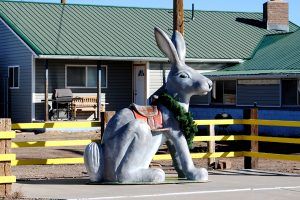 In the beginning, Taylor bought an asphalt-shingled shack that had formerly been used as a snake farm and then he turned out all the snakes, much to the alarm of several area residents. Soon, he began to revamp the building, with dancing chiefs painted on the front, 30 twelve inch jackrabbits hopping along the roofline, and a large rabbit painted on one side of the building. He then installed a three-foot-high, composition jackrabbit with yellow eyes, just inside the door to welcome the many tourists stopping by. Many an old-time traveler can tell a story of having their picture taken atop this rabbit when they were a child. Inside, the counters and shelves were lined with pieces of petrified wood, turquoise jewelry, and Indian souvenirs.

But owning a Trading Post in those days just wasn’t enough. Dotting the highway, they were a dime a dozen and competing with the nearby Geronimo Trading Post, with its visual pulling power of large decorative teepees, Taylor had to do something more. 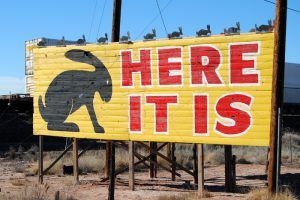 And, something more he did! Joining forces with Wayne Troutner, owner of the For Men Only Store in Winslow, the pair traveled Route 66 to Springfield, Missouri plastering billboards all along the way. Hopping rabbits paired up with a dancing cowgirl for more than 1,000 miles, enticing travelers to stop at the Jackrabbit and the Men’s Only Store in Winslow. After all those miles, travelers couldn’t miss the huge yellow sign that simply said “Here It Is” paired with its famous jackrabbit icon.

Obviously, Taylor’s tactics worked because the Jackrabbit is still in business and has long since become a Route 66 icon. For two decades Taylor operated the post until he leased it to Glen Blansett in 1961. Blansett purchased the business in 1967 and passed it on to his son and daughter-in-law who eventually sold it to their daughter and son-in-law, Cynthia and Antonio Jaquez, who operate the trading post today.

When Interstate highway I-40 bypassed the town in the 1960s, business declined along the Main Street but the town still preserves some iconic places of the old Mother Road.

Today, Joseph City is called home to about 1,400 area residents. It one of the oldest Mormon settlements in Arizona. 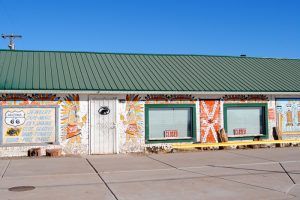