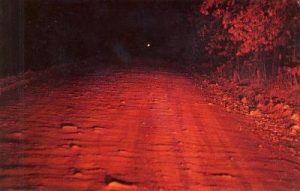 Across the country, there are a number of “Ghost lights,” “Spook lights,” or “Mystery lights” that occur. Many of these lights occur near railroad tracks. Many have legends attached to them concerning engineers or train passengers who were involved in a terrible wreck in which they were decapitated, and the lights are generally flashlights or lanterns with which the ghosts are seeking to find their heads.

Whatever the explanation, it’s amazing how many there are.

In Arkansas, one light occurs near an old railroad track near Crossett. It has been seen by many people since the early 1900s. It appears as an eerie red, white, amber, or blue light about head high.

The Gurden Lights are more famous Arkansas lights, occurring in the small town of Gurden about 75 miles from Little Rock. Both the Crossett and Gurden lights have the railroad decapitation legend attached to them.

In Silver Cliff, Colorado, there is a variation on the theme. The mystery lights here are seen in the old Silver Cliff cemetery. They are usually blue-white and about the size of a silver dollar, and appear in groups of two or three.

Georgia is home to the Surrency light. Surrency is a very tiny town near Macon. This bright yellow ball of light has been seen near the railroad tracks since the early 1900s. Science may have found an explanation for it in a strange pool of liquid that has been found far underground under Surrency. But the liquid itself is a puzzle, as the liquid is not supposed to be able to form nine miles underground, where seismic equipment seems to indicate this liquid lies!

The Paulding light occurs near Watersmeet, Michigan, outside of Paulding. It has been observed for at least the last 40 years, and this is one of the many lights that is connected to the story of a railroad brakeman who lost his life and now wanders the road with his lantern. Since the lights appear to sometimes follow the power lines (although they were seen before the power lines were present,) some people also claim they are the ghost of an Indian dancing on the lines.

The lights appear as circles of red, blue, white, and green, and are evident almost every clear evening. Even though Ripley’s Believe It or Not once offered $100,000 to anyone who could offer a solution to the lights, no logical scientific explanation has yet been found, and the lights remain a mystery. 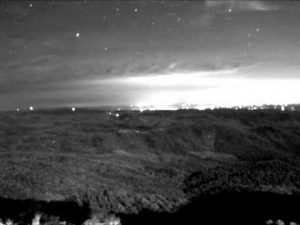 These lights have been reported since before white men settled the area. The Cherokee and Catawba tribes have reports of them as far back as the year 1200. In their history, it is believed that the lights are the spirits of Cherokee and Catawba warriors killed in a great battle that year. Civil War soldiers wrote home about the lights.

The lights have been researched many times, including by teams from the Smithsonian Institution and by the U.S. Geological Society. Theories have included swamp gas, reflections from moonshine stills, and in recent years, some unusual atmospheric condition which reflects electricity. The Smithsonian survey dismissed the moonshine still theory, saying there were not enough stills to cause this kind of activity. There are no swampy areas around Brown Mountain. And the lights were around long before electricity.

In 1913, the U.S. Geological Survey concluded that the lights were reflections from locomotive lights behind Brown Mountain. But shortly after that survey was done, floods washed out all the railroad tracks around Brown Mountain. There was no train service in the area for months, but the lights showed up right on time.

The Brown Mountain Lights are not the only spook lights in North Carolina. Wilmington has the Maco Station Lights, which actually could be the paranormal result of the death of a railroad man named Joe Baldwin in 1867. His death is well-documented in newspapers and other public records, and he did die in a dramatic and violent train accident.

Twelve miles outside of Joplin, Missouri, there is a track of road about four miles long, which crosses the Oklahoma border. The former town of Hornet is located there, and it is here that the Hornet Spook Light appears. It looks like a ball of fire or a lantern and varies from basketball size to considerably larger. It travels down the center of the road, weaving from side to side. Some people feel that it behaves in an intelligent fashion, sometimes appearing inside cars, letting people approach to a certain distance but never get too close and retreating when it is pursued.

The legends attached to this light are centered around Native Americans. One theory is that the lights are the spirits of two Quapaw Indians and another is that it is the spirit of an Osage Chief who, predictably, was beheaded and is looking for his head. Another legend says that the light is the lantern carried by a miner still looking for his children, who were kidnapped by Indians.

Explanations that have been put forward for this light include marsh gas and reflections from minerals. Neither of these explanations holds up. There is reason to believe some sightings may be caused by car lights from the highway five miles away, but this does not explain all the documented sightings from before the highway was built, and even before cars were commonplace. Troy Taylor, in Unexplained America, says that the Army Corp of Engineers concluded that the Hornet Light was a “mysterious light of unknown origin,” and so it remains.

Bragg, Texas has another occurrence of a mysterious light and another decapitated brakeman legend. This light starts small and grows to about the size of a flashlight beam, and is orange. Paulding, Texas also has the very well-known Marfa Lights. The lights were observed by settlers and cowboys driving cattle through Marfa in the 1880s. The first recorded account of these lights was by a rancher named Robert Ellison in 1883. The Apache have legends that the lights are stars that fell from the sky. Today, they can be seen from US 90. They vary in color and intensity, although usually, they appear as reddish-orange balls from 1 to 10 feet in diameter, and they appear to move about. As always, some skeptics claim they are reflections of car lights, but, of course, they were being seen in exactly the same way long before there were cars. Many scientists have tried to come up with an explanation for the lights, but so far, they remain unexplained.

Whatever the spook lights are, they are not just an American phenomenon, of course. There are spook lights in Canada, in the UK, in Norway, and in many other places around the world.

Someday, we may be able to explain them, but in the meantime, it’s good to be aware that we do not have an explanation for everything. The world can always use a little mystery.

About the Author: Rhetta Akamatsu is an author who writes about history, the paranormal and blues music. She is the author of Haunted Marietta, about the ghosts and legends of Marietta, Georgia, written for the History Press for their Haunted America series. She also is the author of two other books about the paranormal a book about blues women, and a new non-fiction book entitled The Irish Slaves. Learn more about Rhetta and her books and other writing at https://rhetta.wordpress.com/  Source: Ezine Articles