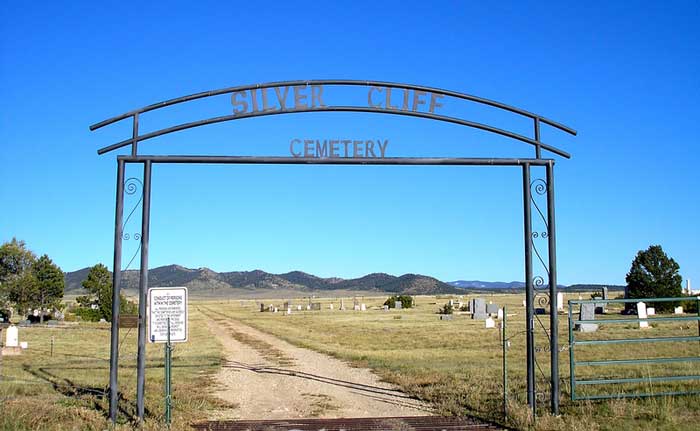 Many people believe this to be an old ghost legend. It has been carried down since the beginnings of the towns of Westcliffe and Silver Cliff. The legend is the ghost lights of the Silver Cliff Cemetery.

Until two months ago, I would have written this legend off as a bit of silly fun. No longer will I say this, for I have seen them in person.

It began as a family history project. My grandfather is buried in the Silver Cliff Cemetery. Now, it should be noted that there are two cemeteries – one is for the Catholics, one for the Protestants. I’m told the one granddad is buried in is the Catholic Cemetery. The other one is called the Cross of The Assumption Cemetery.

My sister and I, along with two friends, decided to investigate these lights for ourselves. We arrived at about 8:00 p.m. on a night this past July. After visiting granddad’s grave and saying a few words, we drove another few hundred feet to the Cross of The Assumption Cemetery and settled in. Two of us were armed with cameras, one a digital and a cheap pocket camera. I will state right here – I did NOT have a flash capability on my cheap pocket camera. The digital camera was NOT set for flash, and it did not go off at any time.

The four of us more or less separated once we got there. My sister stayed with the car and sat on the hood. We three started off walking around. I’ll admit I’m a “fraidy cat,” and I didn’t leave my friend’s side. His wife, however, took off on her own and wandered around all over the place.

Around 9:00, the first lights were seen. They were small, most about the size of a pinky fingernail. They ranged in color from blue to green to white to yellow, and various combinations of these colors. As time went on, the lights became more numerous, larger, and more active. Some seemed to be extremely active, darting from headstone to headstone, never stopping. Others seemed to float in a “lazy fashion,” landing in the grass, on headstones, just wherever.

By 10:00, many were as big as 3-4 inches in diameter, and many glowed brightly. As we stood facing the large white marble cross in the center of the cemetery, we all noticed an orangish glow begin. It was to our left, at the extreme border of the cemetery. As we watched it, the glow became larger, brighter, and seemed to luminesce. It grew to the size of a football and resembled the glow of a campfire.

The various lights seemed to start gravitating toward this glow. They would dart toward it, then return, landing here and there. We tried approaching, but as we got closer, the light became dimmer. When we retreated, it began glowing brightly again.

One odd occurrence was with the large cross. Made of a white stone (probably marble), it had a “ghostly” pale gray-white cast to it in the night. My friend with the digital camera (an amateur photography buff) took a picture of it. The result in her view lens? The cross glowed a dull, deep red. Running up one side of the cross was what resembled a string of teeny, tiny Christmas lights. They appeared to be shooting towards the sky.

The other odd occurrence was with my friend. As she walked through the cemetery, we all noticed that some of the lights seemed to start “following” her. They danced around her and stayed right with her. When we tried getting near to her, they would move away. When we retreated, they would come back. She could see them around her.

As 11:00 approached, the lights were now close enough to us to reach out and almost touch them. They no longer moved away from us, nor did they dim. I can state positively they were NOT fireflies nor glowing bugs of any kind. It was as if you were touching air.

What we saw, I don’t know. But I do believe. And I do want to state this – people claim that it’s caused by the town lights reflecting up into the sky and back down onto the tombstones. They state that its stars reflect off the shiny surface of the tombstones. I want to make a point here, something that I have not seen pointed out. 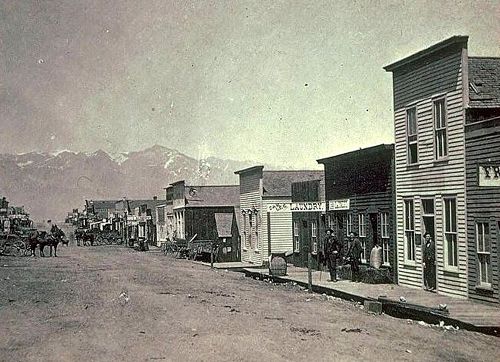 These tombstones are OLD, for the most part. They are aged and weathered. ANY shiny surface on 90% of them has long since worn away. They are dull, dirty, and look very much as old as they are. What’s left on them to reflect? And, since dried, prairie grass does NOT reflect anything, what could explain them being in the grassy sections?

The conditions the night we were there – no moon, no stars. Cloudy, overcast, a bad storm moving in (which started the forest fire in Southern Colorado outside of Pueblo.) No, they were NOT from the lightning. That was striking a good 60 miles from us.

And if they ARE reflections from the lights in town, can anyone explain why they have been seen up there since BEFORE there was electricity in the area? That rules that “explanation” out completely.

I have also not yet run across any articles of people getting near enough to them to reach their hands out to touch. We did. We took our time, stayed almost silent for the almost 4 1/2 hours we were there. We were slow in our movements, almost sluggish. We were gentle when talking about them, keeping our voices to an almost whisper. We spoke about them with reverence and awe, which seemed to feel right to all of us.

When we did finally call it a night and retreated to the car, we were surprised to find them all around the car, once again, close enough to touch. They did not diminish in our headlights as we left.

I believe they are of the Sidhe. (pronounced shee-Gaelic for fairies.) And whatever they may be, I DO now believe.

Haunting Stories From Our Readers