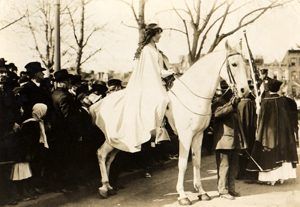 On Monday, March 3, 1913, attorney Inez Milholland, clad in a white cape astride a white horse, led the great woman suffrage parade down Pennsylvania Avenue in the nation’s capital. Behind her, stretched a long line with nine bands, four mounted brigades, three heralds, about 24 floats, and more than 5,000 marchers.

Women from countries that had enfranchised women held the place of honor in the first section of the procession. Then came the “Pioneers” who had been struggling for so many decades to secure women’s right to vote. The next sections celebrated working women, who were grouped by occupation and wearing appropriate garb—nurses in uniform, women farmers, homemakers, women doctors and pharmacists, actresses, librarians, college women in academic gowns. The state delegations followed, and finally, a separate section for male supporters of women’s suffrage. All had come from around the country to “march in a spirit of protest against the present political organization of society, from which women are excluded.” 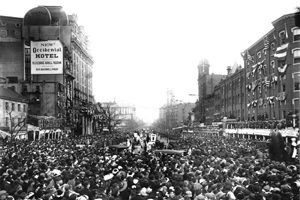 The procession began late, but all went well for the first few blocks. Soon, however, the crowds, mostly men in town for the following day’s inauguration of Woodrow Wilson, surged into the street making it almost impossible for the marchers to pass. Occasionally only a single file could move forward. Women were jeered, tripped, grabbed, shoved, and many heard “indecent epithets” and “barnyard conversation.” Instead of protecting the parade, the police seemed to enjoy all the ribald jokes and laughter and some even participated in them. One policeman explained that they should stay at home where they belonged. The men in the procession heard shouts of “Henpecko” and “Where are your skirts?” As one witness explained, “There was a sort of spirit of levity connected with the crowd. They did not regard the affair very seriously.”

But, to the women, the event was very serious. Helen Keller “was so exhausted and unnerved by the experience in attempting to reach a grandstand that she was unable to speak later at Continental Hall.” Two ambulances “came and went constantly for six hours, always impeded, and at times, actually opposed, so that doctor and driver literally had to fight their way to give help to the injured”. One hundred marchers were taken to the local Emergency Hospital. Before the afternoon was over, Secretary of War Henry L. Stimson, responding to a request from the chief of police, authorized the use of a troop of cavalry from nearby Fort Myer to help control the crowd.

Despite enormous difficulties, many of those in the parade completed the route. When the procession reached the Treasury Building, 100 women and children presented an allegorical tableau written especially for the event to show “those ideals toward which both men and women have been struggling through the ages and toward which, in cooperation and equality, they will continue to strive”. The pageant began with “The Star Spangled Banner” and the commanding figure of Columbia dressed in national colors, emerging from the great columns at the top of the Treasury Building steps. Charity entered, her path strewn with rose petals. Liberty followed to the “Triumphal March” from “Aida” and a dove of peace was released. In the final tableau, Columbia, surrounded by Justice, Charity, Liberty, Peace, and Hope, all in flowing robes and colorful scarves, with trumpets sounding, stood to watch the oncoming procession. The New York Times described the pageant as “one of the most impressively beautiful spectacles ever staged in this country”. 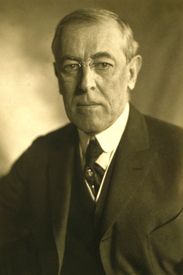 At the railway station a few blocks away, president-elect Woodrow Wilson and the presidential party arrived to little fanfare. One of the incoming president’s staff asked, “‘Where are all the people?’;—‘Watching the suffrage parade,’ the police told him.” The next day Wilson would be driven down the miraculously clear, police-lined Pennsylvania Avenue cheered on by a respectful crowd.

The Washington march came at a time when the suffrage movement badly needed an infusion of vigor, a new way to capture public and press interest. Women had been struggling for the right to vote for more than 60 years, and although progress had been made in recent years on the state level with six western states granting women suffrage, the movement had stalled on the national level. Delegates from the National American Woman Suffrage Association had arrived in the nation’s capital every year since 1869 to present petitions asking that women be enfranchised. Despite this annual pilgrimage and the millions of signatures collected, debate on the issue had never even reached the floor of the House of Representatives. In 1912, Teddy Roosevelt’s Progressive Party became the first major political party to pledge itself “to the task of securing equal suffrage to men and women alike.” But, the Progressives lost the election. 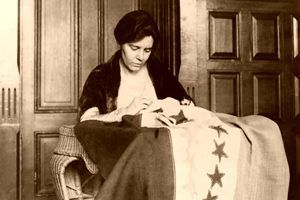 In November 1912, as suffrage leaders were casting about for new means to ensure their victory, Alice Paul arrived at the NAWSA annual convention in Philadelphia. A 28-year-old Quaker from New Jersey, she had recently returned to the United States fresh from helping the militant branch of the British suffrage movement. She had been arrested repeatedly, been imprisoned, gone on a hunger strike, and been forcibly fed, an experience she described in an interview as “revolting.” Paul was full of ideas for the American movement. She asked to be allowed to organize a suffrage parade to be held in Washington at the time of the president’s inauguration, thus ensuring maximum press attention. NAWSA accepted her offer when she promised to raise the necessary funds and gave her the title chairman of the Congressional Committee. In December 1912, she moved to Washington where she discovered that the committee she chaired had no headquarters and most of the members had moved away or died.

Undaunted, Alice Paul convened the first meeting of her new committee on January 2, 1913, in the newly rented basement headquarters at 1420 F Street, NW. She started raising funds; according to one friend, “it was very difficult to refuse Alice Paul.” She and the others she recruited worked nonstop for two months. By March 3rd this fledgling committee had organized and found the money for a major suffrage parade with floats, banners, speakers, and a 20-page official program. The total cost of the event was $14,906.08, a princely sum in 1913 when the average annual wage was $621.20 The programs and tableau each cost more than $1,000.

Suffrage groups across the nation contributed to the success of the procession. From its New York headquarters, NAWSA urged suffrage supporters to gather in Washington: 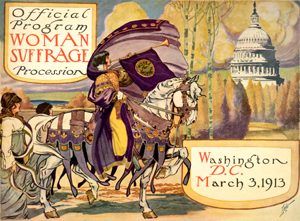 WHY YOU MUST MARCH

Because this is the most conspicuous and important demonstration that has ever been attempted by suffragists in this country.

Because this parade will be taken to indicate the importance of the suffrage movement by the press of the country and the thousands of spectators from all over the United States gathered in Washington for the Inauguration.

This call was answered. On February 12, with cameras clicking, 16 “suffrage pilgrims” left New York City to walk to Washington for the parade. Many other people joined the original marchers at various stages, and the New York State Woman Suffrage Association’s journal crowed that “no propaganda work undertaken by the State Association and the Party has ever achieved such publicity.” One of the New York group, Elizabeth Freeman, dressed as a gypsy and drove a yellow, horse-drawn wagon decorated with Votes for Women symbols and filled with suffrage literature, a sure way to attract publicity.

Two weeks after the procession, five New York suffragists, including Elizabeth Freeman, reported to the Bronx motion picture studio of the Thomas A. Edison Company to make a talking picture known as a Kinetophone, which included a cylinder recording of one-minute speeches by each of the women. This film with synchronized sound was shown in vaudeville houses where it was “hooted, jeered and hissed” by audiences.

AWSA officers prepared a strong letter to the president-elect for the “New York hikers” to carry to Washington. This letter urged that women’s suffrage be achieved during his presidency and warned that the women of the United States “will watch your administration with an intense interest such as has never before been focused upon the administration of any of your predecessors.” Despite the tone of the letter, when the group reached Princeton, where Woodrow Wilson lived, they requested only “an audience for not more than two minutes in Washington as soon after your arrival as possible.” Less than two weeks after his inauguration, Wilson received a suffrage delegation led by Alice Paul, who chose to make the case for suffrage verbally and apparently did not deliver the hikers’ letter. In response to the women’s impassioned plea, he replied that he had never given the subject any thought, but that it “will receive my most careful consideration.” Hardly the wholehearted endorsement sought by the women.

The mistreatment of the marchers by the crowd and the police aroused great indignation and led to congressional hearings where more than 150 witnesses recounted their experiences; some complained about the lack of police protection, and others defended the police. Before the inquiries were over, the superintendent of police of the District of Columbia had lost his job. 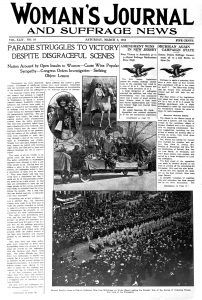 The public outcry and its accompanying press coverage proved a windfall for the suffragists. The Woman’s Journal proclaimed, “Parade Struggles to Victory Despite Disgraceful Scenes, Nation Aroused by Open Insults to Women-Cause Wins Popular Sympathy.” The New York Tribune announced, “Capital Mobs Made Converts to Suffrage.” At its next convention, in November 1913, NAWSA praised the “amazing and most creditable year’s work” of Alice Paul’s Congressional Committee, stating that “their single-mindedness and devotion has been remarkable and the whole movement in the country has been wonderfully furthered by the series of important events which have taken place in Washington, beginning with the great parade the day before the inauguration of the president.”

The organizers of the parade intended its floats and pageant to have visual appeal for the media and thus to attract publicity for the movement. In this effort, they succeeded with numerous photographs appearing in newspapers of the hike from New York to Washington, the marchers and crowds on Pennsylvania Avenue, and the pageant performed at the Treasury Building.   The women’s march also inspired cartoonists, some of whom likened the suffrage movement to colonial America’s fight for independence. James Harrison Donahey, for example, substituted women for men in a cartoon based on the famous painting “Washington Crossing the Delaware.” In another such cartoon, women play the fife and drums in imitation of Archibald Willard’s painting “Spirit of ’76”. Suffrage and anti-suffrage cartoons appeared frequently in magazines and newspapers of the day.

Vivid details about the march also turn up in a seemingly unlikely source. The Yidishes Tageblatt (Jewish daily news), a Yiddish-language publication from New York City with a circulation of seventy thousand, devoted two columns to the women’s parade. The article claimed that twenty-five lost children stayed in police stations overnight and eighteen men asked the police to find their wives. Not one to mince words, famous reporter Nellie Bly, who rode as one of the heralds in the parade, bluntly stated in the headline to her article on the march—“Suffragists Are Men’s Superiors.” With uncanny prescience, she added that it would take at least until 1920 for all states to grant woman suffrage. Despite the pageantry of 1913, Nellie Bly was right. It was to take seven more years before the Nineteenth Amendment to the Constitution, which gave women full rights to vote, finally passed both houses of Congress and was ratified by the required 36 states. 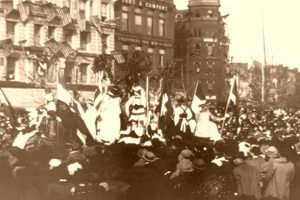 The Woman Suffrage Parade of 1913, one of the most dramatic public events in the 82-year struggle of American women to gain the vote.

By Sheridan Harvey, 2001, Library of Congress. Compiled and edited by Kathy Weiser/Legends of America, updated November 2019