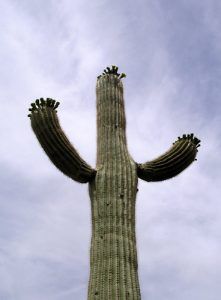 The territory of Arizona may be likened to that wild and rugged mountain region in Central Asia, where, according to Persian myth, untold treasures are guarded by the malign legions of Ahriman, the spirit of evil. Two of the great elemental forces have employed their destructive agencies upon the surface of the country until it might serve for an ideal picture of desolation. For countless centuries the water has seamed and gashed the face of the hills, stripping them of soil, and cutting deep gorges and canyons through the rocks. The water then flowed away or disappeared in the sands, and the sun came with its parching heat to complete the work of ruin. Famine and thirst stalk over those arid plains, or lurk in the waterless and gloomy canyons; as if to compensate for these evils, the soil of the territory teems with mineral wealth.

Grains of gold glisten in the sandy debris of ancient torrents, and nuggets are wedged in the faces of the precipices. Mountains of silver and copper are waiting for the miner who is bold enough to venture through that desolate region in quest of these metals.

The journey from San Diego was made with pack mules and occupied thirty days, during which nearly every hardship and obstacle in the pioneer’s catalog was encountered. When they reached the spot described by Crossman they found the place, which lay at the bottom of a deep ravine, had been covered with boulders and thirty feet of sand by the rapid torrents of five rainy seasons. They immediately commenced “prospecting.” Mrs. Braxton had the good fortune to discover a large “pocket,” from which Crossman and her husband took out in a few weeks thirty thousand dollars in gold. This contented the adventurers, and being disgusted with the appearance of the country, they decided to go back to California. 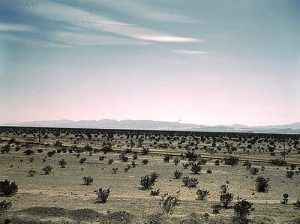 Instead of returning on the same route by which they came, they resolved to cross the Colorado River higher up and in the neighborhood of the Santa Maria. They reached the Colorado River after a toilsome march, but while searching for a place to pass over, Crossman lost his footing and fell sixty feet down a precipice, surviving only long enough to bequeath his share of the treasure to his partner. Here, too, they had the misfortune to lose one of their four pack-mules, which strayed away. Pressing on in a northwesterly direction they passed through a series of deep valleys and gorges where the only water they could find was brackish and bitter, and reached the edge of the California desert.

They had meanwhile lost another mule that had been dashed to pieces by falling down a canyon. Mr. Whitley’s strength becoming exhausted his wife gave up to him the beast she had been riding, and pursued her way on foot, driving before her the other mule, which bore the gold-dust with their scanty supply of food and their only remaining cooking utensils.

Their tents and camp furniture having been lost they had suffered much from the chilly nights in the mountains, and after they had entered the desert, from the rays of the sun. Before they could reach the Mohave river Mr. Whitley became insane from thirst and hunger, and nothing but incessant watchfulness on the part of his wife could prevent him from doing injury to himself. Once while she was gathering cactus-leaves to wet his lips with the moisture they contained, he bit his arm and sucked the blood. Upon reaching the river he drank immoderately of the water and in an hour expired, regaining his consciousness before death, and blessing his devoted wife with his last breath. Ten days later the brave woman had succeeded in reaching Techichipa in so wasted a condition that she looked like a specter risen from the grave. Here by careful nursing she was at length restored to health. The gold-dust which had cost so dearly was found after a long search, beneath the carcass of the mule, twenty miles from Techichipa.

The extraordinary exploits of Mrs. Braxton can only be explained by supposing her to be naturally endowed with a larger share of nerve and hardihood than usually falls to the lot of her sex. Some influence,  too, must be ascribed to the peculiarly wild and free life that prevails in the southwest. Living so much of the time in the open air in a climate peculiarly luxuriant and yet bracing, and environed with dangers in manifold guise, all the latent heroism in woman’s nature is brought out to view, her muscular and nervous tissues are hardened, and her moral endurance by constant training in the school of hardship and danger, rests upon a strong and healthy physique. Upon this theory, we may also explain the following incident which is related to another border-woman of the southwest.

Beyond the extreme outer line of settlements in western Texas , near the headwaters of the Colorado River, and in one of the remotest and most sequestered sections of that sparsely populated district, there lived in 1867, an enterprising pioneer by the name of Babb, whose besetting propensity and ambition consisted in pushing his fortunes a little farther toward the setting sun than any of his neighbors, the nearest of whom, at the time specified, was some fifteen miles in his rear.

The household of the borderer consisted of his wife, three small children, and a female friend by the name of Mrs. L., who, having previously lost her husband, was passing the summer with the family. She was a veritable type of those vigorous, self-reliant border women, who encounter danger or the vicissitudes of weather without quailing.

Born and nurtured upon the remotest frontier, she inherited a robust constitution, and her active life in the exhilarating prairie air served to develop and mature a healthy womanly physique. From an early age, she had been a fearless rider, and her life on the frontier had habituated her to the constant use of the horse until she felt almost more at home in the saddle than in a chair.

Upon one bright and lovely morning in June 1867, the adventurous borderer before mentioned, set out from his home with some cattle for a distant market, leaving his family in possession of the ranch, without any male protectors from Indian marauders.

They did not, however, entertain any serious apprehensions of molestation in his absence, as no hostile Indians had as yet made their appearance in that locality, and everything passed on quietly for several days, until one morning, while the women were busily occupied with their domestic affairs in the house, the two oldest children, who were playing outside, called to their mother, and informed her that some mounted men were approaching from the prairie.  On looking out, she perceived, to her astonishment, that they were Indians coming upon the gallop, and already very near the house. This gave her no time to make arrangements for defense; but she screamed to the children to run in for their lives, as she desired to bar the door, being conscious of the fact that the prairie warriors seldom attack a house that is closed, fearing, doubtless, that it may be occupied by armed men, who might give them an unwelcome reception.

The children did not, however, obey the command of their mother, believing the strangers to be white men, and the door was left open. As soon as the alarm was given, Mrs. L. sprang up a ladder into the loft and concealed herself in such a position that she could, through cracks in the floor, see all that passed beneath.

In the meantime, the Indians came up, seized and bound the two children outdoors, and, entering the house, rushed toward the young child, which the terror-stricken mother struggled frantically to rescue from their clutches; but they were too much for her, and tearing the infant from her arms, they dashed it upon the floor; then seizing her by the hair, they wrenched back her head and cut her throat from ear to ear, putting her to death instantaneously.

Mrs. L., who was anxiously watching their proceedings from the loft, witnessed the fiendish tragedy and uttered an involuntary shriek of horror, which disclosed her hiding-place to the barbarians, and they instantly vaulted up the ladder, overpowered and tied her; then dragging her rudely down, they placed her, with the two elder children, upon horses, and hurriedly set off to the north, leaving the infant child unharmed, and clasping the murdered corpse of its mangled parent.