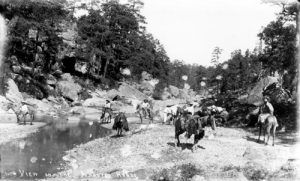 On the same day, seven Americans were killed at Arroyo Hondo; a large Mexican force was preparing to march on Santa Fe, and for a time it seemed as if the handful of American soldiers would be driven out of the territory. This conspiracy was made known to the authorities by an American girl, who was the wife of one of the Mexican conspirators, and becoming, through her husband, acquainted with the plan of operations, divulged them to General Price to prevent a more general outbreak. As it was, the American settlers were in great danger.

The strong and spacious house in which the Benhams and Braxtons lived had formerly been used as a stockade and fortification against Indian attack. Its thick walls were pierced with loop-holes, and its doors, of double oak planks, were studded with wrought-iron spikes, which made it bullet-proof.

A detachment of United States troops were stationed a short distance from their ranch, and the two families, in spite of the disturbed condition of the country, felt reasonably secure. The troops were withdrawn, however, after the revolt commenced, leaving the new settlers dependent upon their own resources for protection. Their cattle and horses were driven into the enclosure, and the inmates of the house kept a sharp lookout against hostile parties of marauders, whether Indian or Mexican.

Early on the morning of January 24th a mounted party of twelve Mexicans made their appearance in front of the enclosure, which they quickly scaled, and discharged a volley of balls, one of which passed through a loop-hole, and, entering Mr. Braxton’s eye as he was aiming a rifle at the assailants, laid him dead at the feet of his wife. Mrs. Braxton, with streaming eyes, laid the head of her husband in her lap and watched his expiring throes with agony, such as only a wife and mother can feel when she sees the dear partner of her life and the father of her sons torn in an instant from her embrace. Seeing that her husband was no more, she dried her tears and thought only of vengeance on his murderers.

The number of the besieged was twelve at the start: Mr. and Mrs.Braxton, Mr. and Mrs. Benham and their children, three Irish herders, and a half-breed Mexican and his wife, who were house servants. The death of Mr. Braxton had reduced their number to eleven. A few moments later the Mexican half-breed disappeared, but was not missed in the excitement of the defense. 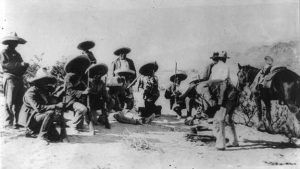 The besieged returned with vigor the fire of their assailants, two of whom had already bit the dust. The women loaded the guns and passed them to the men, who kept the Mexicans at a respectful distance by the rapidity of their fire. Mrs. Benham was the first to mark the absence of Juan the Mexican half-breed, and, suspecting treachery, flew to the loft with a hatchet in one hand and a revolver in the other. Her suspicion was correct. Juan had opened an upper window, and, letting down a ladder, had assisted two of the attacking party to ascend, and they were preparing to make an assault on those below by firing through the cracks in the floor, when the intrepid woman dispatched Juan with a shot from her revolver and clove the skull of another Mexican; the third leaped from the window and escaped.

As Mrs. Benham was about to descend from the loft, after drawing up the ladder and closing the window, she was met by the wife of the treacherous half-breed, who aimed a stroke at her breast with a machete or large knife, such as the Mexicans use. She received a flesh wound in the left arm as she parried the blow, and it was only with the mixed strength of Mrs. Braxton and one of the herders, who had now ascended to the loft, that the infuriated Mexican whom Mrs. Benham had made a widow, could be mastered and bound.

Three of the attacking party had now been killed and three others placed “hors de combat;” the remnant were apparently about to retire from the siege, when six more swarthy desperadoes, mounted on black mustangs, came galloping up and halted on a hill just out of rifle shot.

Mrs. Braxton and Mrs. Benham, looking through a field-glass, at once recognized them as the band which had made them captives a few months before.

After a few moments of consultation one of the band, who appeared to be only armed with a bow and arrow, advanced towards the house waving a white flag. Within thirty paces of the door stood a large tree, and behind this, the envoy, bearing the white flag, ensconced himself, and, striking a light, twanged his bow and sent a burning arrow upon the roof of the house, which, being dry as tinder, in a moment was ablaze.

Both of the women immediately carried water to the roof and extinguished the flames. Another arrow, wrapped in cotton steeped in turpentine, again set the roof on fire, and as one of the intrepid matrons threw a bucket of water upon the blaze, the dastard stepped from behind the tree and sent a pistol ball through her right arm, but at the same moment received two rifle balls in his breast, and fell a corpse. 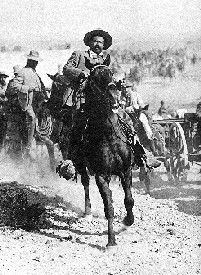 Mrs. Benham, for it was she who had been struck, was assisted by her husband to the ground floor, where her wound was examined and found to be fortunately not a dangerous one. A new peril, however, now struck terror to their hearts; the water was exhausted. The fire began to make headway. Mrs. Braxton, calling loudly for water to extinguish it, and meeting no response, descended to the ground floor, where the defenders were about to give up all hope, and either resign themselves to the flames or by emerging from the house, submit to massacre at the hands of the now infuriated foe. As Mrs. Braxton rolled her eyes hither and thither in search of some substitute for water, they fell on the corpse of her husband. His coat and vest were completely saturated with blood. It was only the sad but terrible necessity which immediately suggested to her the use to which these garments could be put. Shuddering, she removed them quickly but tenderly from the body, flew to the roof and succeeded, by these dripping and ghastly tokens of her widowhood, in finally extinguishing the flames.

The attack ceased at night-fall, and the Mexicans withdrew. The outbreak having been soon quelled by the United States forces, the territory was brought again into a condition of peace and comparative security.

At the close of the war in 1848, Mrs. Braxton married a discharged volunteer named Whitley, and having disposed of the late Mr. Braxton’s interest in the New Mexican ranch, removed in 1851 with her husband and family to California, where they lived for two years in the Sacramento Valley.

Whitley was possessed of one of those roving and adventurous spirits which is never happy in repose, and when he was informed by John Crossman, an old comrade, of the discovery of a rich placer which he had made during his march as a United States soldier across the territory of Arizona, at that time known as the Gadsden purchase, he eagerly formed a partnership with the discoverer, who was no longer in the army, and announced to his wife his resolution to settle in Arizona. She endeavored by every argument she could command to dissuade him from this rash step, but in vain, and finding all her representations and entreaties of no avail, she consented, though with the utmost reluctance, to accompany him. They accordingly sold their place and took vessel with their household goods, for San Diego, from which point they purposed to advance across the country three hundred miles to the point where Crossman had located his placer.