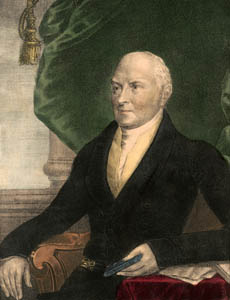 John Quincy Adams was an American statesman, diplomat, lawyer, and diarist who served as the sixth president of the United States from 1825 to 1829.

He was the worthy son of a worthy sire, the elder President John Adams, and was born at the family mansion at Quincy, Massachusetts, on July 11, 1767, to John and Abigail Smith Adams. One of six children, he was named after his mother’s maternal grandfather, Colonel John Quincy, after whom Quincy, Massachusetts, is named. Private tutors educated young Adams. Until the age of ten, Adams grew up on the family farm in Braintree, largely in the care of his mother. Though frequently absent because he participated in the American Revolution, his father, John Adams, maintained a correspondence with his son, encouraging him to read.

At the age of eleven, he accompanied his father to Europe, who went there as minister of the newly-declared independent United States of America. In Paris, he was much in the society of Dr. Benjamin Franklin and other distinguished men. It may be said that he entered upon the duties of a long public life before he was 12 years old, for he learned the useful rudiments of diplomacy and statesmanship. He attended school in Paris and Amsterdam and was at the University of Leyden for a while.  During this period, Adams studied law, French, Greek, and Latin. In 1779 he started a diary that he kept until just before he died in 1848.

In 1781, when only 14 years of age, he accompanied United States minister Francis Dana to St. Petersburg, Russia as a private secretary. During the Winter of 1782-73, he traveled alone through Sweden and Denmark and reached the Hague safely, where his father was resident minister for the United States. He accompanied his father to Great Britain in 1784. He returned to the United States in 1785 and earned admission as a member of the junior class of Harvard College the following year. He joined Phi Beta Kappa and excelled academically, graduating second in his class in July 1787. 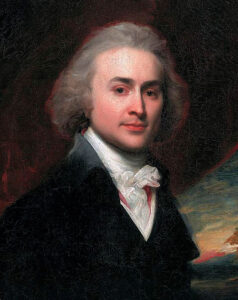 At the age of 20, young Adams commenced the study of law with Judge Theophilus Parsons at Newburyport, Massachusetts, and entered upon its practice in Boston. Politics engaged his attention, and he wrote much on topics of public interest, especially concerning the necessity of neutrality, on the part of the United States, in relation to the quarrels of other nations. On the recommendation of Thomas Jefferson, President George Washington introduced him into the public service of his country, by appointing him resident minister in the Netherlands, in 1794. He was afterward sent to Portugal in the same capacity, but on his way, he was met by a new commission from his father, who was then President, as a resident minister in Berlin.

Adams initially opposed the ratification of the United States Constitution. However, he ultimately came to accept the document, and in 1789 his father was elected as the first Vice President of the United States. In 1790, Adams opened his own legal practice in Boston. Despite some early struggles, he successfully became an attorney and established financial independence.

Adams spent the winter of 1795-1796 in London, where he met Louisa Catherine Johnson from Maryland, then living there with her father, American merchant Joshua Johnson. In April 1796, Louisa accepted Adams’s proposal of marriage. Adams’s parents disapproved of his decision to marry a woman who had grown up in England, but he informed his parents that he would not reconsider his decision. The couple married in All Hallows-by-the-Tower in London on July 26, 1797, and would eventually have four children. Shortly after the wedding, Joshua Johnson fled England to escape his creditors, and Adams did not receive the dowry that Johnson had promised him, much to the embarrassment of Louisa. 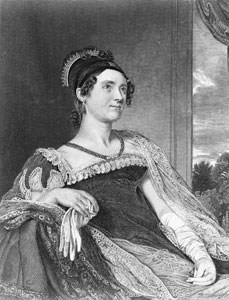 Adams returned to Boston in 1801 and was elected to the Massachusetts Senate the following year. In 1803, he was sent to the Federal Senate, where he uniformly supported the measures of Thomas Jefferson, the old political opponent of his father. Because of that obedience to the dictates of his conscience and judgment, the legislature of Massachusetts censured him, and he resigned his seat in 1806. His republican sentiments increased with age, and in 1809, James Madison appointed him minister to the Russian court. Multilingual, Adams held diplomatic posts for the duration of Madison’s presidency and served as part of the American delegation that negotiated an end to the War of 1812.

In 1815, he was appointed minister to the English court. There he remained until 1817 when President James Monroe called him to his cabinet as Secretary of State. In that role, Adams negotiated the Adams-Onís Treaty, which provided for the American acquisition of Florida and arranged with England for the joint occupation of the Oregon country. He also helped formulate the Monroe Doctrine, which became a key tenet of U.S. foreign policy. He filled that office for eight years and then succeeded Monroe as president of the United States.

The first President, who was the son of a President, John Quincy Adams, in many respects, paralleled the career as well as the temperament and viewpoints of his illustrious father. Upon becoming President, Adams appointed Henry Clay as Secretary of State. Well aware that he would face hostility in Congress, Adams nevertheless proclaimed a spectacular national program in his first Annual Message. He proposed that the Federal Government bring the sections together with a network of highways and canals and develop and conserve the public domain, using funds from the sale of public lands. In 1828, he broke ground for the 185-mile Chesapeake & Ohio Canal. Adams also urged the United States to take a lead in the development of the arts and sciences through the establishment of a national university, the financing of scientific expeditions, and the erection of an observatory. His critics declared such measures transcended constitutional limitations. 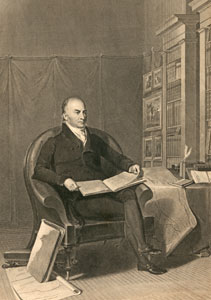 Adams also became increasingly critical of slavery and the Southern leaders he believed controlled the Democratic Party. He was particularly opposed to the annexation of Texas and the Mexican-American War, which he saw as a war to extend slavery and its political grip on Congress. During Adams’s presidency, the Democratic-Republican Party split into two major camps: the National Republican Party, which supported President Adams, and Andrew Jackson’s Democratic Party. In 1828, Andrew Jackson and his angry followers charged that a “corrupt bargain” had taken place, and immediately began their campaign to wrest the Presidency from Adams. This was an ordeal Adams did not easily bear, and the Democrats proved to be more effective political organizers. Jackson soundly defeated Adams in the 1828 presidential election.

After his defeat, he retired to private life in Massachusetts, more honored and respected by all parties than any retiring president since George Washington left the chair of state. Andrew Jackson began to serve as president in the Spring of 1829.

Adams’ administration of four years was remarkable for its calmness and the country’s general prosperity. There was unbroken peace with foreign nations and friendly domestic relations until the end of his term when party spirit became rampant. 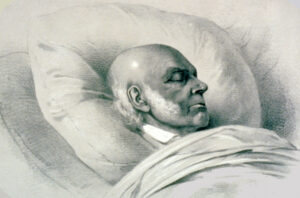 However, his countrymen would not allow him to remain in repose; in 1830, he was elected a representative in Congress. In December 1831, he took his seat there, and from that time until his death, he continued to be a member of the House of Representatives by consecutive re-elections. In 1836 southern Congressmen passed a “gag rule” providing that the House automatically table petitions against slavery. Adams tirelessly fought the rule for eight years until he finally obtained its repeal. In Congress, he was distinguished for wise, enlightened, and liberal statesmanship.  Above all, he fought against the circumscription of civil liberties.

On February 21, 1848, he collapsed on the floor of the House from a stroke and was carried to the Speaker’s Room, where he died the next day. His last words were, “This is the end of earth.” He was 81 years old.

He was buried, as were his father, mother, and wife, at First Parish Church in Quincy, Massachusetts.

Historians concur that Adams was one of the greatest diplomats and secretaries of state in American history. They typically rank him as an average president, as he had an ambitious agenda but could not get it passed by Congress. 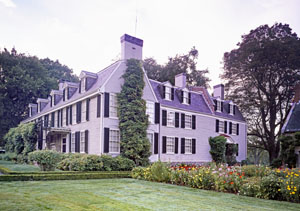 The “Old House” was home to two presidents: John and John Quincy Adams. As of this notation in the early 21st Century, it has passed out of family hands. Photo by Carol Highsmith.