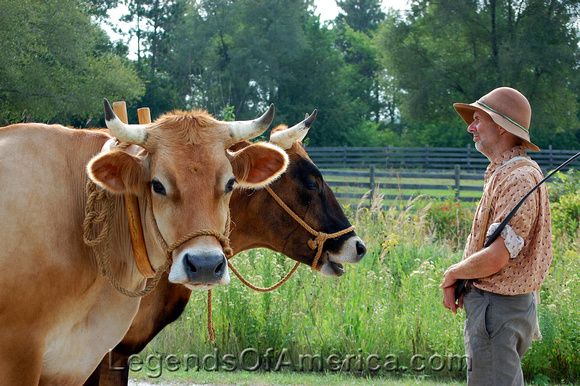 A couple of Oxen pull a cart around Old World Wisconsin. Photo by Dave Alexander.

In the 1970s, Wisconsin researchers traveled throughout the state looking for authentic historic buildings representing generations of Wisconsin settlers. Over 60 of these historic buildings were then painstakingly moved piece by piece, literally numbering boards, bricks, and logs to reconstruct them in what would become the largest outdoor museum of rural life in the United States known as “Old World Wisconsin”. 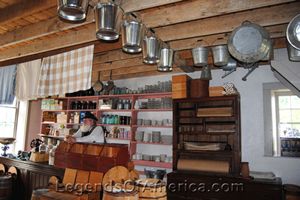 Located about 35 miles from Milwaukee, and just outside the small town of Eagle, Old World Wisconsin opened in 1976 and features villages and farms representing various times and cultures of 19th and 20th Century life in the state.

You can experience what it was like to be a Finish immigrant in the early 1900s at the Rankinen and Ketola farms, or turn back the clock even more at the Norwegian area which includes the Raspberry Schoolhouse, the furthest building moved from upper Wisconsin by Lake Michigan.  One of our favorites, the one-room schoolhouse features a teacher who will give you a lesson, and if you ask, tell you why they couldn’t keep teachers for more than just a few months at this short-lived school (think wilderness and wolves). Other exhibits include German, Danish, African American, and Polish.

Run by the Wisconsin Historical Society, each area has its own reenactors showing what life was like, some even cooking food from the time period represented. You’ll also find hands-on activities and authentic heirloom gardens. During our visit in August of 2014, there was a squirrel in a pot along with some fresh turnips from the garden at the Norwegian Fossebrekke Farm, while the Finish Ketola farm had some more modern baked goodies. 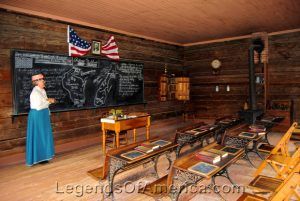 Reenactor tells of life in northern Wisconsin teaching in the Raspberry School. Photo by Kathy Weiser-Alexander.

The 1870’s Crossroads Village features costumed interpreters explaining life as an Irish laundress, Welsh Shopkeeper, Bohemian shoemaker and more. It also includes a General Store with authentic merchandise of the time period, along with a Blacksmith shop, Wagon shop and more. You’ll find these interpreters throughout the 600-acre site, with each giving a true representation of Wisconsin life. And along with the actual relocated historic structures, you’ll even find a couple of cemeteries, exact replica’s of their originals, all the way down to the inscriptions on the grave markers.

The Wisconsin Historical Society gives you an opportunity to have a different experience at Old World throughout their open season.  For example, during our visit it was Civil War-themed, with a Union camp, demonstrations and re-enactments at Crossroads village. They also have special events throughout the season, including a children’s camp. You can hike your way through Old World, or do what we did and take the trams provided, however, either way, plan on a full day at this museum.

Open early May through October, with some special events in November and December, Old Word Wisconsin is a true gem and a vivid recreation of working farmsteads and settlements of European immigrants in the Badger State.