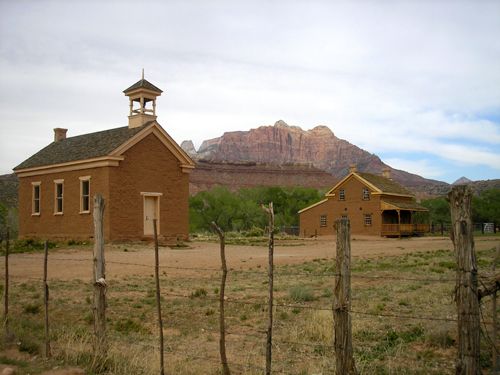 Grafton, Utah is a ghost town situated along the Virgin River, just south of Zion National Park. Established by Mormon pioneers, many of its buildings still stand and it is one of the most photographed ghost towns in the American West.

After Brigham Young and his group of Emigrant pioneers settled in the valley of the Great Salt Lake in 1847, the Mormon President determined that church members would populate the region, which he hoped would become the “state” of Deseret and a place they could practice their religion without persecution.

For the next 50 years, the Mormons established some 500 villages in an effort to claim the territory and secure resources for self-sufficiency. Young saw farming opportunities in the southern part of what would later become Utah, which he referred to at the time as “Dixie.”  Reasoning that the warmer land, if irrigated, could produce cotton, the Mormons experimented at Santa Clara in 1854 with success.

Young, then began to send numerous families and single men, who were advised to immediately marry, south as part of what was called the Cotton Mission. Soon, a number of cotton farming communities sprouted up along the upper Virgin River, including Virgin in 1857, Wheeler/Grafton in 1859, Adventure in 1860, Duncans Retreat, and Northup in 1861, and Shunesburg, Rockville, and Springdale in 1862.

In 1859, five families from Virgin established the small settlement of Wheeler; however, it was soon destroyed by a week-long flood of the Virgin River in January 1862. Moving about a mile upstream, they built another settlement which they named New Grafton, after Grafton, Massachusetts. 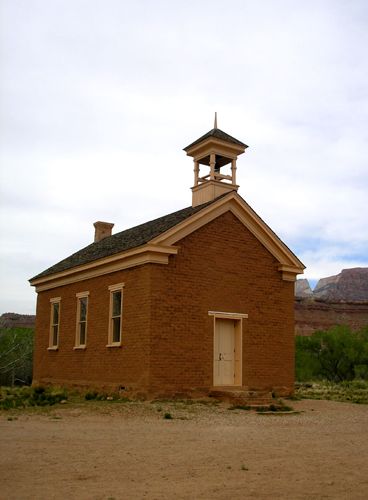 Two years, later the small settlement was called home to some 28 families and supported about 168 people. The town boasted a number of log houses, a post office, a church, and a combination school and community hall. Each family farmed about one acre of land in narrow strips along the sides of the Virgin River, dug irrigation canals, and planted cotton, orchards, and private gardens.

However, life in the fertile valley was not easy. Though the Virgin River was their very life, it was untamable and often betrayed them, leaving their dams, ditches, and crops destroyed during periods of intense flooding, and at other times, leaving their crops susceptible to erosion from previous flooding. And, though they were able to grow cotton, most of their small parcels of land were given over to simple food production to sustain themselves

Though the work was hard, the families also enjoyed social activities, including swimming, horseback riding, picnics, and holiday parties in addition to Sunday worship services and other religious activities. In addition to the unpredictable river, residents also experienced difficulties with the Indians during the Black Hawk War (1865-68.)  In 1866, the Indian attacks became so problematic, that the people of Grafton were evacuated to nearby Rockville. Though they returned daily to work their farms, the settlement, they did not return permanently until 1868.

After another devastating flood of the Virgin River in 1868, many of the residents gave up and left the community. When church officials visited many of the towns along the river the following year, in order to boost morale and reinforce the religion, they arrived to find many of their flock had deserted.

In 1886, Grafton residents built a 2-story adobe schoolhouse, which they also utilized as a church, and a community center where social activities and meetings were held. The preserved structure continues to stand today and is one of the most photographed buildings. 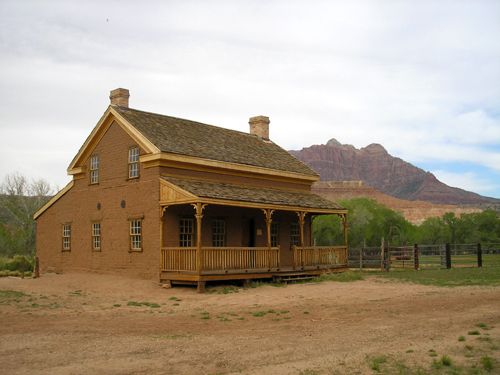 By the turn of the century, the nearby towns of Duncan’s Retreat and Shunesburg had been completely abandoned, but Grafton still maintained a few residents, most of whom had by then given up farming and turned to ranching due to the unpredictable river. However, when the Hurricane Canal was built in 1906 that delivered the river waters to a wide bench 20 miles downstream, many Grafton families packed up and moved to Hurricane.

More families left when Grafton was hit by another devastating flood in 1909. The last classes were taught in the school building during the 1918-19 school year, at which time the enrollment had dwindled to nine students. The following year students were transferred to the school at Rockville.

By 1920, Grafton’s population had been reduced to just three families and the local Mormon Church was discontinued the following year. The last residents of Grafton, Frank Russell, and his wife, Ellen, moved away in 1944. Electricity, plumbing, and other modern utilities were never introduced into Grafton homes.

Today, this historic community is preserved by the Grafton Heritage Partnership Project, a non-profit organization that unites government and private landowner interests in preserving Grafton as a historic site.

Grafton’s preserved and restored structures are situated in a beautiful valley, surrounded by the awe-inspiring mountains and formations of Zion National Park. Unsurprisingly, the site has been utilized in three movies, including the popular 1969 film, Butch Cassidy and the Sundance Kid, starring Robert Redford and Paul Newman.

The old townsite displays several original buildings including the 1886 two-story adobe schoolhouse.  The site also includes the adobe home of the Alonzo Russell family, built in 1861. Russell was a blacksmith by trade and supplied the settlement with all manner of services. He lived in the home until 1910 when he died at the age of 89.  His son, Frank, and daughter-in-law Mary Ballard Russell moved into the house in 1917 and lived in the home until they moved to St. George in 1944. They were the last residents to leave Grafton. 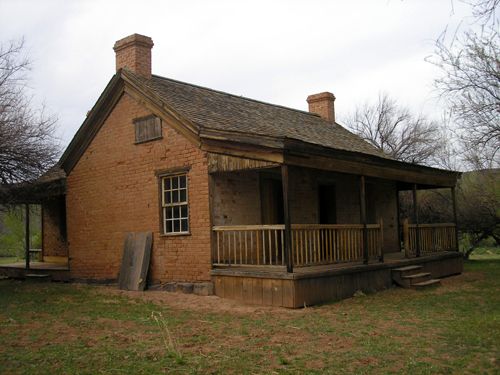 The 1877 John Wood Home, made of brick, also stands, along with a log barn and log granary, all surrounded by a historic split rail fence.

The 1907 wooden Ballard Home and barn also still stand.  Another home, also owned by Alonzo Russell and built in 1879 also continues to stand. Up the road from Grafton is the 1862 Grafton Cemetery, which continued to serve residents until 1924.

Grafton, located just south of Zion National Park, can be accessed by driving to Rockville, Utah on UT-9 and turning south on Bridge Lane, which crosses the Virgin River on a historic, single-track iron bridge before the road turns westward. The pavement soon ends and climbs into the hills on the Smithsonian Butte Road, a 9-mile scenic back road to the cemetery. The townsite is just beyond the cemetery. 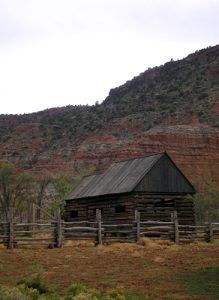