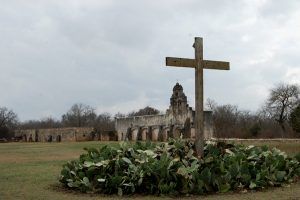 Officially called the Mission San Juan Capistrano, this mission was originally founded in 1716 in eastern Texas. In 1731, it was transferred to its present location. In 1756, the stone church, a friary, and a granary were completed. A larger church was begun but was abandoned when half complete, the result of population decline.

Over 20 miles southeast of Mission San Juan was Rancho de Pataguilla, which, in 1762, reported 3,500 sheep and nearly as many cattle. These products helped support not only the San Antonio missions but also the local settlements and presidial garrisons in the area. By the mid-1700s, San Juan, with its rich farm and pasturelands, was a regional supplier of agricultural produce. With its surplus, San Juan established a trade network stretching east to Louisiana and south to Coahuila, Mexico. This thriving economy helped the mission to survive epidemics and Indian attacks in its final years. 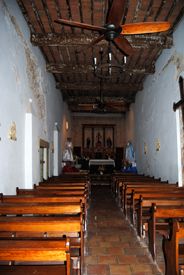 In July, 1794, the mission was secularized on July 14, 1794, but continued to be attended by the resident priest at Mission San Francisco de la Espada, until about 1813. It was then attended by the one remaining missionary at the nearby Mission San Jose until 1924. The mission was then largely neglected until 1840, when religious services were once again conducted, this time by diocesan priests. Members of the Claretian and Redemptorist Orders also held mass in the church until 1967, when the Franciscans returned to Mission San Juan.

The Works Project Administration (WPA) unearthed some of the native quarters and the foundations of the unfinished church in 1934. The chapel, priests’ quarters, and other structures were reconstructed during the 1960s. Most of the original square remains within the courtyard walls, portraying an authentic depiction of the floor plan and layout.

An active parish today, it is located at 9101 Graf Road. 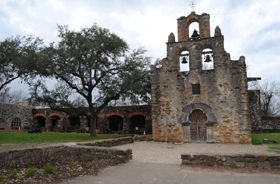 Officially called the Mission San Francisco de la Espada, this mission was originally founded southwest of present-day Weches, Texas in 1690. Along with several others, it served as a buffer against French encroachment from Louisiana. Fevers, floods, fires, enemies, and limited supplies prompted several relocations of this early mission. In March 1731, it was transferred to a bank along the San Antonio River. A friary was built in 1745, and the church was completed in 1756.

Spanish Franciscan missionaries developed the mission, training and converting the Coahuiltecan (kwa-weel-teken) Indians in the principles of farming, ranching, architecture, blacksmithing, loom weaving, spinning, and masonry. Espada was the only San Antonio mission where bricks and tiles were made. 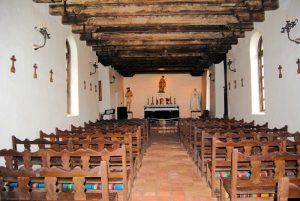 In 1794, Espada began the process of secularization or the transformation to a church-based community. However, the mission was impoverished. Each of the remaining 15 families received land but shared equipment and supplies. In 1826, a band of Comanche raided the cornfields and killed the livestock. The same year, a kitchen fire destroyed most of the buildings but, the chapel survived. Yet, people continued to make their home here.

From 1858 to 1907, Father Francis Bouchu served the mission and he undertook to restore many of the collapsed buildings inside the compound. After he left, the church was temporarily closed for repairs and reopened in 1915. At this time the diocesan priests followed the Claretian Fathers, and a school was opened inside the compound of Espada by the Sisters of the Incarnate Word and Blessed Sacrament. In 1967 the school was discontinued, and the Franciscans returned. From 1967 through 1986 the community continued to maintain the irrigation system through the efforts of the Espada Ditch Company.

Today, the mission boasts the best-preserved segments of the historic acequias, part of which includes the still working Espada Dam and Aqueduct. Combined, these structures represent perhaps the best surviving physical assembly of an 18th-century Spanish irrigation network in the United States.

Still an active parish today, the mission is located at 10040 Espada Road. 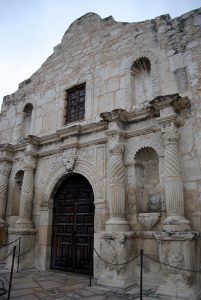 The Alamo by Kathy Weiser-Alexander.

The fifth mission in the area is the Mission San Antonio de Valero more commonly known as the Alamo. The first of the six missions to be established in the area, it was founded in 1718. The mission is a former Roman Catholic mission and fortress compound, site of the Battle of the Alamo in 1836, and now a museum.

The compound, which originally comprised the church, the convent, and several homes and outbuildings, was built for the conversion of Native Americans to Christianity. In 1793, the mission was secularized and soon abandoned. Ten years later, it became a fortress housing the Mexican Army group, the Second Flying Company of San Carlos de Parras, who likely gave the mission the name “Alamo.” It is best known for being utilized by the Texians during the Texas Revolution and the Battle of the Alamo.

Though it is not part of the San Antonio Missions National Historical Park, it is part of the Missions Trail. It is operated by the Daughters of the Republic of Texas. See full article HERE. 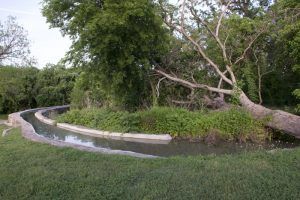 This little known mission of the San Antonio area gets little mention as it was so short-lived, no permanent buildings were ever constructed, and nothing remains today. Officially called the San Francisco Xavier de Nájera Mission, it was the third mission established in the San Antonio area in 1722. Located about three miles south of San Antonio de Valero (the Alamo), it was established upon the request of a Juan Rodríguez, who was a chief of the Ervipiame tribe, but, introduced himself as the chief of the Ranchería Grande tribes, a loose assemblage of Tonkawa and Coahuiltecan Indian bands that dominated Central Texas.

Rodríguez assured the Spaniards that they were friendly and agreed to accept missionaries if the white men would provide his people with firearms to use against the hostile Apache. As a result, Mission San Jose and Najera were established. Though Mission San Jose would continue, Mission Najera would not, as the Indians refused to settle in large numbers. The mission soon languished, without permanent buildings ever having been erected. It was abandoned four years later in 1726 and its followers merged with Mission San Antonio de Valero. Today, a granite monument memorializes the mission, which is probably located on what is a golf course today. 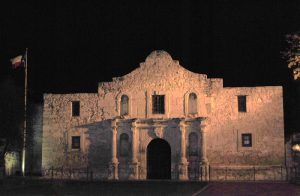 The Alamo at night. One can almost imagine those long ago Texian soldiers hunkered down behind these walls listening signs of attack from the Mexican Army. Photo by Kathy Weiser-Alexander.