San Antonio Missions National Historical Park preserves four of the five Spanish frontier missions in San Antonio, Texas. The fifth and best-known mission in San Antonio, the Alamo, owned by the State of Texas, is not part of the park. 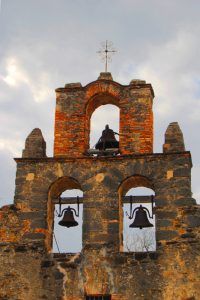 Over 400 years ago Spanish expeditions began to explore the land that is now the American Southwest. Beginning in the 16th century, missionaries, accompanied by a few soldiers, moved north out of the Valley of Mexico, founding missions and presidios.

For the Spaniards, the acculturation of the native peoples was a major means for securing their claim to vast lands in North America. With very few soldiers and settlers, Spain’s claim to these areas, in the face of encroachment by other European settlers, depended upon the success of the missions.

Church and State were very closely linked, and the Spanish monarch granted various religious orders of the Catholic Church permission to found mission communities. Through instruction by these religious, communities of native converts were to emerge as loyal subjects to the crown on the frontier.

Threatened by French encroachments from Louisiana, the Spanish stepped up their colonization of Texas and beginning in 1690, six missions were established in what is now East Texas. Along with the missions, a system of frontier military outposts, or presidios, was built as a means of protecting Spain’s expanding territory. Generally, these presidios were manned by a small force of soldiers. Wherever missions were built, a presidio was sure to be established nearby. Despite an interval of withdrawal, eastern Texas missions began a period of slow growth. 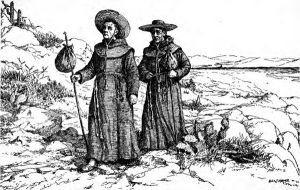 The lush area of the San Antonio River Valley in the San Pedro Springs area soon attracted the Spanish missionaries. The region had long been called home to Native Americans, who called the vicinity “Yanaguana,” meaning “refreshing waters.” In 1691, a group of Spanish explorers and missionaries came upon the river and the Indian village on June 13, the feast day of St. Anthony of Padova, Italy and named the place and river “San Antonio” in his honor.

In need of a way-station between the missions and their source of supply to the west, a failed mission known as San Francisco Solano, was relocated from Coahuila, Mexico to the San Antonio River in 1718 and renamed Mission San Antonio de Valero. By the start of the next century it was called “The Alamo” and received enduring fame in 1836 during the Texas Revolution, when around 180 defenders, made up of settlers and native Texans, held out for 13 days against up to 5,000 enemy soldiers in the Battle of the Alamo, before finally being defeated. 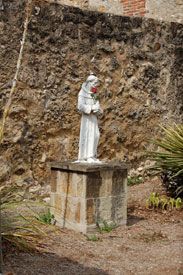 By 1731, as a result of changing political policies, drought, and disease, the missions in eastern Texas once again began to falter. Three of these missions were eventually relocated along the San Antonio River, joining the two founded earlier and the Presidio of San Antonio de Béxar. These missions are Concepción, San Juan, and Espada. A fort, a village, and an irrigation system with dam and aqueduct were added soon after, and the communities flourished, gradually becoming augmented by other development and forming the city of San Antonio.

The missions flourished between 1745 and the 1780s. Increasing hostility from the mission Indians’ traditional enemy, the Apache, and later the Comanche, coupled with inadequate military support, caused the communities to retreat behind walls. Disease reduced the native population, accelerating the missions’ decline.

Several gateways provided entrance into the compounds of the walled communities. Bastions, or fortified towers, were located along the walls to provide a defense. Living quarters were built inside, against the compound walls, for the Indians who had converted to Christianity, as well as the Spanish soldiers. The church was the focal point of community life. The structure was prominent within the compound. The convento, or living quarters of the missionaries and several lay assistants, was in close proximity to the church building. The cemetery, well used as the result of European diseases, lay adjacent.

Workshops and storerooms dotted the grounds. Outside the walls were the croplands and ranches, and the danger of the Apache and Comanche. 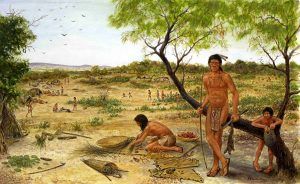 Coahuiltecan Indians by Frank Weir. The Coahuiltecan were not one specific tribe, but rather, were comprised of various bands which the Spanish found living in the area of San Antonio. Speaking different languages, they had similar habits and were encompassed as a geographic group.

The Native Americans who lived in the San Antonio missions came from a number of hunting and gathering bands. Collectively, they are referred to as Coahuiltecans (kwa-weel-tay-kans.) Their strictly regulated mission life represented a profound change for people who had followed the rhythms of nature. Formerly ranging throughout south Texas and northeastern Mexico, their movements were dictated by the seasonal availability of food. While distinct dialects and religious practices were found among these bands, they shared some characteristics.

Extended families joined others in larger bands when food was abundant. The men hunted bison and deer. This was supplemented by fish, birds, rabbits, lizards, and snakes. Fruits, nuts, beans, roots, and seeds gathered by women and children were part of their diet.

The local people fashioned brush huts and slept on woven mats. Dressed in skins and woven sandals, they used bows and arrows, fishing nets, digging sticks, and grinding stones to obtain and prepare food. They produced some simple pottery but were more skilled in making baskets, using them to store and transport food. They practiced rites of passage and seasonal ceremonies common to many hunter-gatherer cultures.