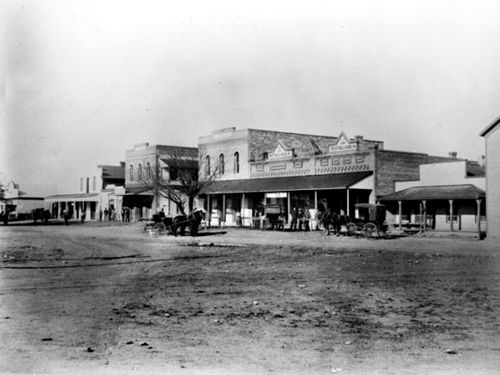 A small unincorporated community in central Medina County, Texas, tiny D’Hanis is rich in history. The original townsite, about 1 ½ mile east of today’s community, was founded by Henri Castro in 1847. From France, Castro immigrated to the United States in 1827 and became a naturalized citizen. In 1842, he became an empresario of the Republic of Texas, when he received contracts for two grants of land on which he was to establish 600 families.

Between 1843 and 1847 he succeeded in chartering 27 ships, which he brought to Texas from France, 485 families, and 457 single men. His task was made difficult due to the Mexican-American War, but, in the end, he was successful. He settled his first shipload of families at Castroville in September 1844; in 1845 he established the village of Quihi; in 1846, the town of Vandenburg; and the last village, D’Hanis, was founded in 1847.

In the spring of 1847, 29 families from the Alsace region of France settled along the San Antonio Road-Rio Grande Road. The village was named for William D’Hanis, a manager of Castro’s colonization company. Each colonist was given a town lot and 20-acre farms were surveyed and deeded to the first colonists. With building materials in short supply, the first homes were rough shelters of mesquite pickets and thatch, but, these would later be replaced by European-style rock homes.

A small structure was built in the middle of the village that served as a Catholic Church with services conducted by priests from nearby Castroville. In 1849, the U.S. Army began to build Fort Lincoln about 2 ½ miles to the northwest of the village, which gave employment to some of the settlers and provided protection for Indian raids. South of Fort Lincoln, a small town formed called Seco Settlement. A few D’Hanis residents moved to that community for more protection. Members of this community built a school, homes, and a number of small businesses.

In 1850, D’Hanis sported about 20 homes and had a school teacher. Two years later a post office was established and the town became a stage stop on the San Antonio-Rio Grande Road. In 1869, the settlers built St. Dominic’s Church and in the early 1870s, two nuns of the Sisters of Divine Providence taught school in D’Hanis. 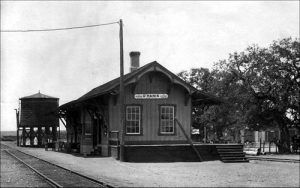 By 1881, D’Hanis boasted two stores, a dance hall, its large Catholic Church, and mineral well baths that were thought to have medicinal qualities. That same year, the Galveston, Harrisburg & San Antonio Railroad barreled through Medina County and bypassed D’Hanis, building a depot 1 ½ miles to the west.

Like many other towns across the west, the vast majority of the settlement picked up and moved closer to the depot. The settlement then became known by the locals as “New D’Hanis,” and the former site referred to as “Old D’Hanis.” After just a few years, there was little left of the old town, other than its cemetery and large Catholic Church. New D’Hanis was just south of the Seco Settlement that had formed around Fort Lincoln in the early 1850s. In the meantime, Fort Lincoln had closed in 1852, after the frontier line had advanced westward. The buildings remained intact for some time, and the Texas Rangers made headquarters at the site. Later; however, the barracks were torn down and transformed into residences at Seco Settlement and the hospital building was used as a private home. 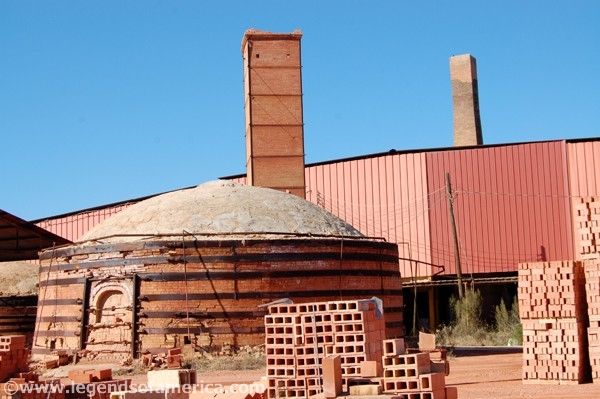 Established in 1883, the D’Hanis Brick and Tile Company continues to make brick and tile the old-fashioned way by Kathy Weiser-Alexander.

In 1883, the D’Hanis Brick and Tile Company was founded producing hand-made natural terra cotta. After all these years, the company still operates in the small town, continuing to make brick and tile the old-fashioned way. The bricks are made from local clay found in the area and sent all over the world. However, they are also very evident in the buildings in D’Hanis, in everything from business buildings, to homes, to sheds.

By the next decade, the community also claimed four general stores, one saloon, flour and grist mill, and two hotels, including the wood frame J.M. Koch Hotel (pronounced Cook) built in 1898. In 1900 there were 266 people calling D’Hanis home.

In 1906, the J.M. Koch Hotel, which primarily served railroad travelers, was rebuilt with local brick.  It continues to operate today as a bed and breakfast inn. In 1908 St. Anthony’s School was built and the D’Hanis News began publishing. It was later renamed as the D’Hanis Star and would continue until 1923. 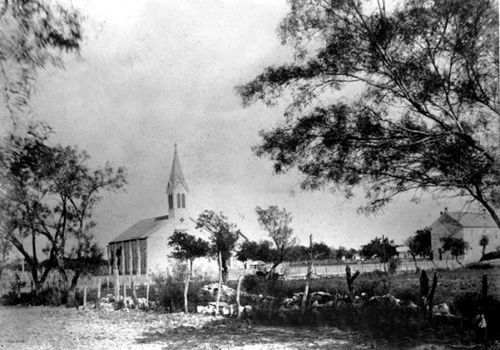 In 1910, a second brick factory, Seco Pressed Brick, was established and the D’Hanis Independent School District was formed. After St. Dominic’s Church in old D’Hanis burned about 1912, the congregation began to build the Holy Cross Church in new D’Hanis. The ruins of the old church continue to stand near the old Catholic Cemetery. The Holy Cross Church was completed in 1914 and continues to serve its congregation today. In 1916, the town’s first bank opened and in 1924 a second Catholic Church called Our Lady Queen of Peace, was built for the Mexican-Americans of the town.

By 1930, the population was an estimated 270 people. Over the years, the town suffered a number of floods, the most recent in 2007. The Holy Cross Church was badly damaged by fire in 1963 but was restored the following year.

D’Hanis installed waterworks in 1955, street lights in 1957, and a sewer system in 1973. The Seco School continued to be active until the 1940s, and Seco Settlement was considered a separate town for many years. Today; however, it is part of D’Hanis. Somewhere along the line, the Seco Brick Plant was bought out and merged with the D’Hanis Brick and Tile Company. 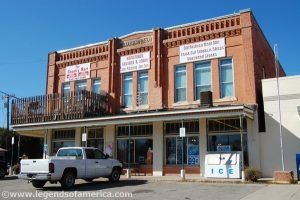 The D’Hanis Country Mart, located in the 1908 Louis Carle building, serves as a general mercantile and grocery store, much as it did in 1908, by Kathy Weiser-Alexander.

The population of the small town is about 550 people today. It continues to boast several businesses including a post office, the D’Hanis State Bank, in its original location since 1916; Bill and Rosa’s Steakhouse and Saloon, situated in an old hardware store; and the Country Mart, located in the 1908 Louis Carle building. This old building originally served as a general mercantile and grocery store, much as it does today. The second story has served several purposes including the first business office of the D’Hanis Brickyard, the telephone company, The D’Hanis Star newspaper, and the D’Hanis Land Company. Today, it houses the Lodge, which is available for hunters, family reunions, parties, and company retreats. In addition to containing a large hall, it also sports a large living room, four bedrooms, two baths, and an ample kitchen.

The historic Koch’s Hotel has been fully modernized and renovated and now serves as a Bed and Breakfast. Filled with antiques, it features five large guest rooms, each with a private bath. 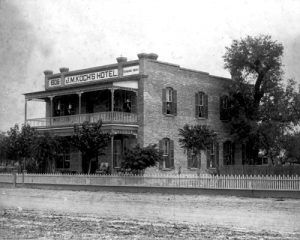 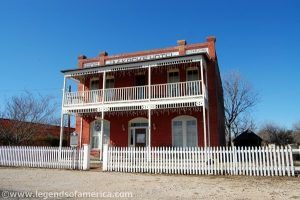 The J.M. Koch Hotel is virtually unchanged today and now serves as a Bed & Breakfast by Kathy Weiser-Alexander.