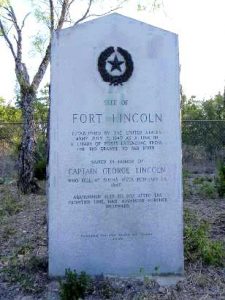 Fort Lincoln, Texas was located on the west bank of Seco Creek about a mile north of present-day D’Hanis in the south-central part of the state.

The fort was established after the Mexican-American War in July 1849 and named for Captain George Lincoln, who was killed in the Battle of Buena Vista. The post was one of eight that formed the first line of permanent federal frontier defense. Constructed on high ground that provided a strategic view of the area, Major James Longstreet, commanding the infantry troops who were tasked with repelling and tracking down Indian raiders and protecting the Woll Road from San Antonio to Fort Duncan. The structures were primarily built of local gray limestone and by 1851 it included barracks, officers’ quarters, a commissary, storehouse, and a hospital.

There were other less substantial buildings that were constructed of logs. The post was abandoned in July 1852 as the frontier was advancing westward. The buildings were then utilized by the Texas Rangers. Later, the barracks were torn down and the material used for homes at D’Hanis. The property was purchased by a man named Richard Reily, who used the hospital building as his personal home. Unfortunately, there are no remains of the fort today, other than a historical marker.