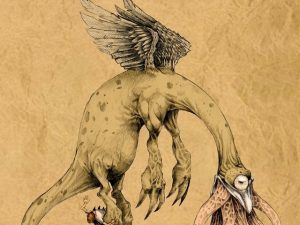 For centuries, a large winged beast known as the Snallygaster is said to have terrified the people of Frederick County, Maryland. The dragon-like beast is described as being a half-reptile and half-bird that lives deep in the caves of South Mountain. The mysterious creature is said to swoop silently down from the sky, stealing farm animals and children from the unsuspecting farm folk. Some say it’s real.

The area was settled by German immigrants beginning in the 1730s, who called the creature a Schneller Geist, meaning “quick spirit” in German. The earliest folklore mixes the half-bird features with nightmarish features of demons and ghouls.

Other descriptions describe the beast as half-reptile, half-bird with a metallic-like beak lined with razor-sharp teeth. Sometimes it is described as having octopus-like tentacles. The earliest stories claim that this monster sucked the blood of its victims.

The Snallygaster has one widely known enemy, called Dwayyo. The Dwayyo is reported to be a mammalian biped with features similar to a wolf, but the stance and stature of a human. The Dwayyo and the Snallygaster have reportedly had vicious encounters dating back to the early settlement of the Middletown Valley.

For years, the Snallygaster lived only on the pages of folklore until 1909 when stories of the beast began to appear in newspapers. Encounters between local residents and the winged-creature in February and March 1909 described it as having “enormous wings, a long pointed bill, claws like steel hooks, and an eye in the center of its forehead.” Further, it was said to make screeches “like a locomotive whistle.”

A February 1909 article claimed that a man had been seized by the winged creature, which proceeded to sink its teeth into his jugular and drain the body of blood before dropping it along a hillside.

The story was carried prominently in Middletown, Maryland’s Valley Register, and soon spread far and wide, so much so that the Smithsonian Institution offered a reward for the hide and U.S. President Theodore Roosevelt reportedly considered postponing an international trip to personally hunt the beast.

In the early issues, the flying beast seemed to be everywhere at once.

In New Jersey, it was reported that its footprints were first discovered in the snow. In West Virginia, it was said that the flying beast almost caught a woman near Scrabble, was found roosting in a farmer’s barn and laid an egg the size of a barrel near Sharpsburg, 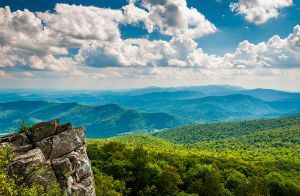 In Maryland, it was first sighted by a man who operated a brick-burning kiln near Cumberland. Spied near the kiln sleeping, when it awoke, it emitted a blood-curdling scream and angrily flew away. It was also sighted near Hagerstown, south of Middletown at Lover’s Leap, and seen flying over the mountains between Gapland and Burkittsville, where it was reported to have laid another very large egg. The last sighting in Frederick County occurred in March 1909 where three men fought the creature outside a railroad station for nearly an hour and a half before chasing it into the woods of Carroll County.

Afterward, there were no more sightings of the mysterious creature for the next 23 years, at which time, it once again appeared in Frederick County, Maryland. The first reports said the “bird” was seen just below South Mountain in Washington County.

It was surmised at the time, that as the life expectancy of a Snallygaster was estimated at about 20 years, the new sightings were from the offspring of the 1909 creature.

At this time, the Middletown Valley Register requested that local residents who spied the creature should provide as accurate and detailed a description as possible for scientific purposes.

The next thing heard of the Snallygaster, is that it had died in Washington County when it was overcome by the fumes of a moonshine still and fell from the sky into the 2500-gallon vat of alcohol. According to the story, revenue agents soon arrived and destroyed both the vat and the carcass of the beast.

No appearances have been reported since.