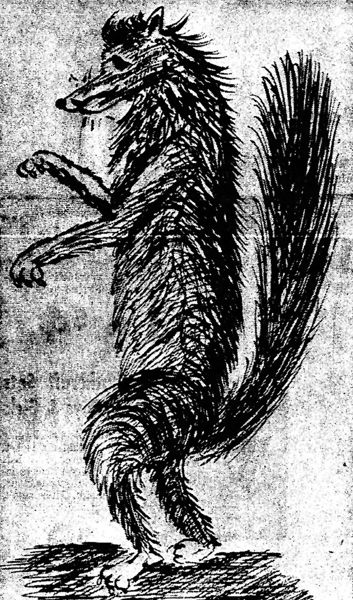 In the woods of Maryland is said to hide a wolf-like creature known as Dwayyo or Dewayo. It is described as having features similar to a wolf, with dark fur over its entire body, a long bushy tail, and a dog like nose, but, it stands like a human and utilizes its fore-legs like arms. It is said to be some 6-foot-tall.

According to legend, Dwayyo is the mortal enemy of the Snallygaster, another area cryptid that is described as a flying, blood-sucking reptile that has been sighted in the Maryland Blue Ridge Mountains. Their vicious encounters reportedly date back to the early settlement of the Middletown Valley.

The first mention of the name Dwayyo comes from a sighting in 1944 in West Middleton, Frederick County, Maryland. Witnesses heard the creature make ‘frightful screams’ and there were footprints attesting to the claims of the sighting.

However, the tale did not come to prominence until a newspaper account in the Frederick News Post on November 27, 1965, was published and detailed an account of the creature:

“Near the woods of Gambrill State Park, John Becker went out in his yard to investigate a strange noise. It was getting dark, and he had started back to the house, when he saw something moving toward him. It was as big as a bear, had long black hair, a bushy tail, and growled like a wolf or a dog in anger. As it got closer, it stood up on its hind legs and attacked him. Becker fought the creature until it ran into the woods, leaving him, his wife and children in horror. Deciding to remain anonymous under the alias John Becker, he filed a report with local state police, telling of an attack by a mysterious monster that he called a Dwayyo.” 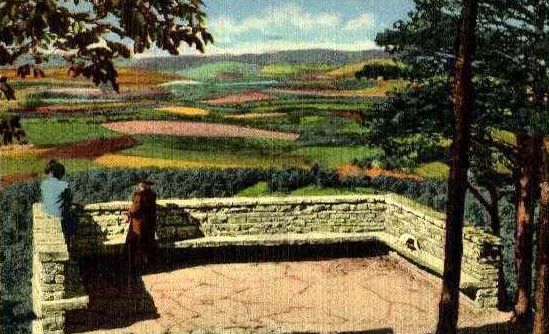 Soon, more stories followed in area newspapers, spawning a rash of calls and letters to the newspapers. Other sightings of were reported in nearby areas. However, by mid-December, the story started to fade.

In the summer of 1966, the creature was again sighted on the outskirts of Gambrill State Park when a man only referred to only as ‘Jim A.’ encountered the Dwayyo as he was heading toward a camp site. He described it as a shaggy two legged animal the size of a deer that had a triangle shaped head with pointed ears and chin. It was dark brown in color and when approached it made a horrid scream and backed away from the man. Jim went on to say that the creature had an an odd walk as it retreated, it’s legs, “stuck out from the side of the trunk of the body making its movements appear almost spider-like as it backed away”.

In the Fall of 1976 another sighting of the Dwayyo took place in Fredrick County near Thurmont when two men were driving of Route 77 onto a private road. There, they saw a large creature run across the road in front of their car. They described it as:

“at least 6 ft tall but inclined forward since it was moving quickly. Its head was fairly large and similar to the profile of a wolf. The body was covered in brown or brindle colored fur but the lower half had a striped pattern of noticeable darker and lighter banding. The forelegs were slimmer and held out in front as it moved. The back legs were very muscled and thick similar to perhaps a kangaroo. This was not a hominid type creature; it did not have the characteristics of an ape. It was much more similar to a wolf or ferocious dog however it was definitely moving upright and appeared to be adapted for that type of mobility. I was particularly impressed by the size and strength of the back legs, the stripes on the lower half of the body and the canine-wolf-like head.”

Later in 1978 two park rangers were near the Cunningham Falls area when they encountered “a large hairy creature running on two legs”.

More than two centuries ago, another such creature is told of in folklore – that of the Hexenwolf. In the late 18th century, the Pennsylvania Dutch had started to settle in Carroll, Frederick and Washington Counties of Maryland. Almost immediately, stories began to circulate about a wolf like creature. Its description was similar to that of the Dwayyo – a mammalian biped with features similar to a wolf, but with the stance and stature of a human. The legend of the Hexenwolf had long been known to inhabit tracts of land across much of eastern Pennsylvania and told in German folklore.