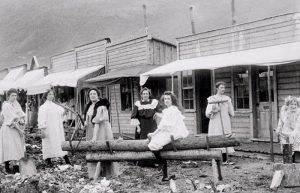 Ladies and their cribs, Dawson, Yukon, Canada, about 1900

Courageous women from all walks of life joined the Klondike Gold Rush of 1897-1998, but, by far, the majority of these women were saloon girls and prostitutes. Like other mining camps of the Old West, vice played a big part in the gold rush days, as saloons, gambling halls, and prostitution were big revenue machines.

The many women who worked as prostitutes in the boomtowns of Skagway and Dyea, Alaska, and Dawson City in Canada came from all walks of life. Many followed the migration of thousands of gold seekers and their money, but others didn’t enter the profession willingly. Abduction into the sex industry was common, as women were forced to work as prostitutes against their will. Others arrived with husbands or family who either died or deserted them. With few options to support themselves, they had little choice but to make money as prostitutes. 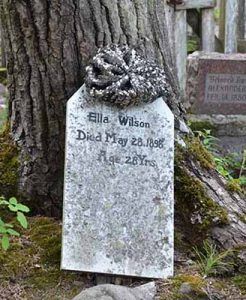 In Skagway, Ella D. Wilson was an African American prostitute working in this dangerous profession. In May 1898 Ella transitioned from a citizen to a statistic when she was found dead. Cause of death: murder. She was discovered in her bed with a pillowcase over her head and a gag in her mouth. Her wrists and ankles were tied together, her money and jewelry missing, and her trunk was rifled through. Everything pointed to a robbery gone wrong.

Rumor had it that Ella had $2,000 in her possession which would amount to $60,936 in 2018. A well-known madam from Denver, Colorado named Mattie Silks, who spent a little time in the area during the gold rush, accused the notorious Skagway con-man Jeff “Soapy” Smith as the one responsible for Ella’s death. In lawless Skagway, nothing came of this accusation. Just five weeks later, Soapy Smith died in a shootout. To this day, the murder of Ella D. Wilson remains unsolved.

Ella may be gone, but she is not forgotten. Her final resting place is the Gold Rush Cemetery located at the north end of Skagway. Her grave is just a few dozen feet away from the grave of the man accused of murdering her, Soapy Smith. 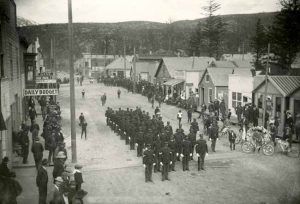 Company L of the 24th Infantry

Two more African American women were also prostitutes in Skagway – Ruth Brown and Rose Arnold. Like many other professional prostitutes, they saw the advantage in working in a boomtown.

In particular, these women saw their opportunity for success arise when Company L of the 24th infantry became established in Skagway. The 24th infantry was one of four all-black units in the United States Army. There was already one account of a white prostitute refusing service to a black soldier, and these women saw their opening. Ruth and Rose established their own house of ill repute on the east end of Sixth Avenue, right next door to Company L’s barracks. While the soldiers were stationed there Ruth and Rose had steady business. 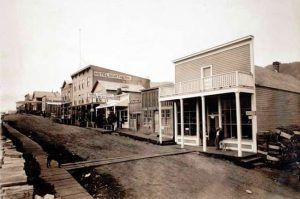 Main Street in Skagway, Alaska about 1900

However, when the soldiers left in 1902 Ruth Brown and Rose Arnold found themselves in a less lucrative business environment.

By 1905 the once Marshal, now Magistrate, Tanner ruled over the gamblers, prostitutes, and saloon owners in Skagway. Prostitution was still alive and well in the city, though it was heavily regulated through quarterly fines. Each quarter women in the sex industry plead guilty and paid their fine of $25 plus court fees, roughly $700 in today’s money. This means each woman paid nearly $3,000 in fines each year to stay in business. On January 25, 1905, Rose and Ruth had enough. When their time came to face Magistrate Tanner both women plead not guilty to “being an inmate of a house of ill-repute.” No women had tried this before and much to the surprise of Ruth and Rose, it almost worked. Rose Arnold was acquitted of being, “an inmate of a house of ill fame.” While Ruth Brown tied up the court for a few days fighting the charge of, “keeping a house of ill repute in connection with Rose Arnold.” 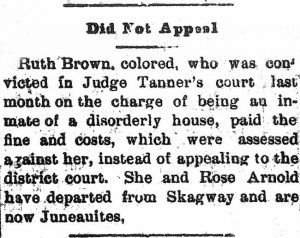 In the end, the result was two more acquittals and two more arrests before Magistrate Tanner could secure the conviction he sought. Found guilty on January 29th Ruth Brown received the standard $25 fine plus court costs. The fines totaled $141, which in 2018 would be over $4,000. Skagway made its stance known, prostitutes would be prosecuted to the fullest extent of the law until found guilty. Stunts like Ruth Brown’s would not be tolerated. In early February Ruth and Rose cut their losses and left Skagway for good and headed to Juneau, Alaska. Afterward, they essentially disappeared from the public record.

One such woman who didn’t have a bad time in Skagway was Diamond Lil Davenport. A Vaudeville star, she made her way to Alaska with the rest of the troupe and decided to stay, opening the nicest brothel in the boomtown. She was described as having perfect beauty and appeared to be a person of real refinement. Her time in Alaska was successful before she moved on to Seattle, Washington. 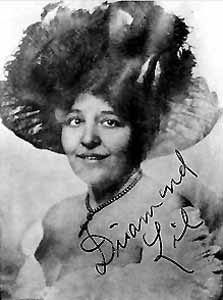