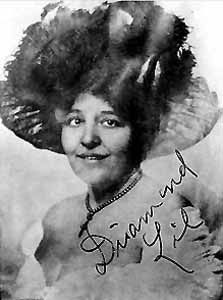 Diamond Lil Davenport, a Klondike Gold Rush madam in Skagway, Alaska was said to have a million dollar smile because her teeth were studded with diamonds. Running one of the most lavish houses bordellos in the boomtown, she was said to have stood nearly six feet tall, was very attractive, and always sported an elaborate diamond collection, one of which was implanted into her teeth.

Diamond Lil was born Evelyn Hildegard in Austria-Hungary on September 12, 1881, to a prominent Jewish family. At some point, the family immigrated to the United States and settled in Montana where they worked in the cattle business.

She left home when she was just 12 years old and married a man who had an inheritance who introduced to the finer things in life. However, when he ran out of money, she left him. She then began to travel across the country, singing in saloons and her naturally booming voice made her the “toast of the town” in the many places she visited. 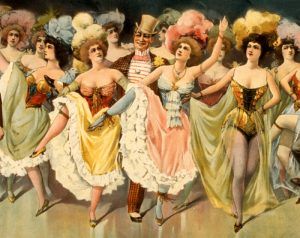 When she was working for Alexander Pantages’ Vaudeville Circuit, she went to Skagway, Alaska during the Klondike Gold Rush. There, she took the stage name of Diamond Tooth Lil. But when the vaudeville show moved on she stayed in Skagway and soon opened a “Luxury House” where she entertained only rich men who could pay handsomely for what she had to offer. By that time she was going by the name of Lilian and it was here, that she first made a name for herself.

She had the best pianist in town play for her guests. It was rumored that Lil had connections to the underworld in Chicago, but she was always completely honest in running her house. 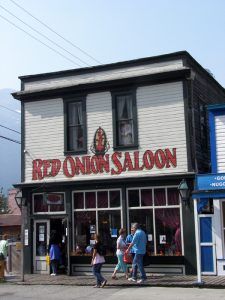 She was said to have spent a couple of years in Skagway where she collected and wore other diamond-studded jewelry, including a white gold snake bracelet studded with 125 real diamonds that scaled the length of her arm.

She was described by Ella Lang Martinson, who was making a trip north on the S.S. Rosalie in June 1898 to meet her husband:

“Certainly nature had fashioned her into a perfect beauty and at first glance, she did appear to be a person of real refinement. But Diamond Lil was a courtesan in the fullest sense of the word, only entertaining the obviously rich clients who could pay handsomely for what she had to offer. Nevertheless, she was fully entrenched in ‘the world’s oldest profession.”

Today, her bordello still stands in Skagway, called the Red Onion Saloon. On the ground floor of the building was classiest dance hall and saloon in town, while the second floor contained ten small rooms which served as the brothel.

After her stay in Alaska, she returned to the Vaudeville circuit and in 1904, she became the “Voice of St. Louis”, singing “Meet Me In St. Louis”, in the Budweiser Pavilion at the World’s Fair. She continued to travel and earned the monikers the “Toast of the Barbary Coast” and “The Belle of New York”. This gave her the opportunity to meet many rich men and was said to have married several times. 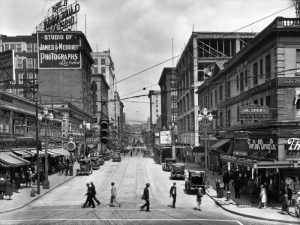 In the 1920s she settled down in Seattle, Washington and invested in apartment houses. She was briefly married to George Miller who she divorced in 1923, just one week before she inherited $150,000 from her mother in Los Angeles.

In the next decade, her mind began to fail and in 1935, her friends committed her to the Western State Hospital, a psychiatric hospital in Lakewood, Washington. Her diamonds were sold off one by one to pay for her care. However, her lawyer had some trouble selling the diamonds because some women balked at wearing jewels that were tainted by a woman such as Lil.

She remained at the state hospital until 1961 when her assets had been exhausted and she was moved to a nursing home on welfare.

“At the time of her commitment, she was reported to be wracked with venereal disease and narcotics… Although she is still insane, she apparently is in good physical health.” – Whitehorse Star, May 1961

Her obituary in the New York Times read:

[Lakewood], Wash., June 20 – Diamond Tooth Lil, a famous dance hall queen of the Alaskan gold rush days, died this week at a nursing home here. She was 92 years old, and her real name was Honora Ornstein.

Lil spent the last 40 years of her life in institutions and watched two fortunes disappear after being the toast of the North.

She earned her first large wages, on the Pantages vaudeville circuit in Alaska, where she acquired her nickname because of the diamond fillings in her teeth. She also collected diamonds.

Committed to the Western State Hospital .. in 1935, she saw her fortune and her jewels go to the state over the years to pay for her care.

Diamond Lil was buried in a simple grave yesterday.