The largest underground gold mine is the Homestake Mine in Lead. Tours are available today telling of the area and the mine’s rich history.

The Mammoth Site is of great scientific importance due to the primary (actual death area) accumulation of mammoth bones at the site. Most fossils are found where they have been deposited by stream beds or carnivores.

It is illegal to lie down and fall asleep in a cheese factory.

Movies that show police officers being struck, beaten, or treated in an offensive manner are forbidden in South Dakota.

Rumor has it that the tradition of spreading sawdust on the floors of bars and saloons started in Deadwood, South Dakota due to the amount of gold dust that would fall on the floor. The sawdust was used to hide the fallen gold dust and was swept up at the end of the night.

Fossilized remains of life 50 million years ago have been arranged in unusual forms, which is Lemmon’s mark of distinction at the world’s largest petrified wood park.

Pierre, South Dakota is the only example of a state and capital in the U.S. that don’t share any letters.

South Dakota has one of the largest Native American populations, with nine official tribes and some 60,000 people.

Internationally famous, the Sturgis Rally and Races, held during the first full week of August, welcomes motorcyclists from all parts of the world to tour and show their skills competing in the hill climb and racing events. Throughout the years, the Rally has grown into a 15-day premier event with the attendance of more than 650,000 racers, visitors, and celebrities!

Clark is the Potato Capital of South Dakota. It is also the home of a Mashed Potato Wrestling contest.

One of Keystone’s claims to fame is that Carrie Ingalls, of Little House on the Prairie lived here most of her adult life.

Mt. Rushmore was called Mountain of Rock before the presidential faces were carved.

The Badlands are known as “the playground” of the dinosaur.

South Dakota’s State motto is “Under God the People Rule.”

The site of a rich gold strike in 1875, Deadwood retains its mining town atmosphere. While Deadwood is one of the most highly publicized mining towns of the trans-Mississippi West, much of its fame rests on the famous or infamous characters that passed through.

The youngest person to ever be elected to the South Dakota Legislature was Justin Davis, who was elected to the House of Representatives in 2002 at 24 years old. 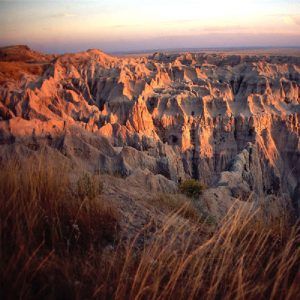 Sage Creek Wilderness is the site of the reintroduction of the black-footed ferret, the most endangered land mammal in North America.

The name “Black Hills” comes from the Lakota words Paha Sapa, which means “hills that are black.” Seen from a distance, these pine-covered hills, rising several thousand feet above the surrounding prairie, appear black.

Belle Fourche is the geographical center of the United States of America, designated in 1959 and noted by an official marker and sheepherder’s monument called a “Stone Johnnie”.

Bowdle is known for the tallest water tower in South Dakota.

Wild Bill Hickok was killed in Deadwood, South Dakota in 1876.  He is buried there in the cemetery.

South Dakota adopted the honey bee as the state insect in 1978.

Mitchell, South Dakota is the home of the world’s only Corn Palace, built with 3,500 bushels of ear corn.

The Black Hills Wild Horse Sanctuary is the home of 300 wild mustangs, where they run free on several thousand scenic acres.

Drilling began on the four faces of Mount Rushmore National Memorial in 1927. Towering 6,200 feet, the faces of George Washington, Thomas Jefferson, Theodore Roosevelt and Abraham Lincoln are scaled to men who would stand 465 feet tall.

Sculptor Gutzon Borglum originally planned to include a Hall of Records behind the faces but never completed the project. Creation of the Shrine to Democracy took 14 years and cost a mere $1 million, though it’s now deemed priceless.

Towering over the Black Hills at an elevation of 7,242 feet, Harney Peak is the highest point east of the Rocky Mountains.

Clark is the Potato Capital of South Dakota and is also home to the world famous Mashed Potato Wrestling contest.

In 1803, U.S. President Thomas Jefferson purchased the Louisiana Territory from France, a real-estate deal that at the time doubled the size of the United States.

South Dakota is the home of the Dakota, Lakota, and Nakota tribes, which make up the Sioux Nation.

Jewel Cave is the third-longest cave in the world. More than 120 miles of passages have been surveyed. Calcite crystals that glitter when illuminated give the cave its name.

In 1898, the first commercial timber sale on Federal forested land in the United States was authorized in the area of Jim and Estes Creeks (near the town of Nemo).

Woonsocket is known as The Town with the Beautiful Lake. Lake Prior sits in the middle of town.

With more than 82 miles of mapped passages, Wind Cave contains the world’s largest display of a rare formation called boxwork.

Harney Peak, at 7242 above sea level, is the highest point in the United States east of the Rockies.

A prospector in the Black Hills named a promising claim after his neighbor’s daughter, calling it “The Little Allie”. The prospector’s wife got angry because he had never named a claim after her and she demanded that the mine be renamed in her honor. The prospector agreed and renamed the mine “The Holy Terror” which is what it is still called today.

The 9824-acre Black Elk Wilderness in the center of the Norbeck Wildlife Preserve was named for Black Elk, an Oglala Lakota holy man.

The Mammoth Site of Hot Springs contains the largest concentration of Columbian and woolly mammoth bones discovered in their primary context in the world! This National Natural Landmark is the only in-situ (bones left as found) display of fossil mammoths in America.

The Pioneer Auto Museum in Murdo details more than 250 rare automobiles including the infamous Tucker and Edsel.

Near the shore of Lake Herman, Prairie Village includes the original townsite of Herman, Dakota Territory. It is also home of the Art B. Thomas Hershell-Spillman Carousel that is complete with its operating coal-fired boiler and steam engine.

The abundant water flow of Spearfish Creek favored the establishment of a Federal Fish Hatchery in 1898. It is known today as the D.C. Booth Historic Fish Hatchery.

Sioux Falls exists as a city today because the land speculators who staked town site claims there in 1857 came in search of the cascades of the Big Sioux River.

The Flaming Fountain on South Dakota State Capitol Lake is fed by an artesian well with natural gas content so high that it can be lit. The fountain glows perpetually as a memorial to all veterans.

The Crystal Springs Ranch rodeo arena in Clear Lake was built on a drained duck pond. The former duck pond is now known as “America’s Most Natural Rodeo Bowl”.

Faith, South Dakota is famous to paleontologists. Several Hadrosaur, Edmontosaurus annectens were excavated on a ranch north of Faith, and one of the largest, most complete, and best-preserved Tyrannosaurus Rex was excavated nearby.

The Silent Guide Monument in Philip was built in the late 1800s by a sheepherder to mark a waterhole that never went dry. Made of flat stones, the guide originally stood fourteen feet high, and could be seen as far as thirty-five miles away.

For millions of years, Split Rock Creek near Garretson cut deep gorges through Palisades State Park. Geologists say the Sioux quartzite spires are 1.2 billion years old! Glaciers deposited a thin layer of debris atop the quartzite. Beds of dark red pipestone can be found between the layers. This is one of the few areas in the nation where pipestone is found. The mineral is considered sacred by American Indians.

Mato Paha “Sacred Mountain” is the origin of many Native American legends. Rising 1400 feet above the surrounding prairie near Sturgis, and standing all by itself, Bear Butte isn’t hard to find. It was used as a landmark by the Plains Indians and even today it is considered sacred by the plains peoples.

Black Hills National Cemetery “The Arlington of the West” is a final resting place of our nation’s veterans.

The Anne Hathaway Cottage at Wessington Springs is the only structure in the Midwest US that features a thatched roof. The cottage is styled after the original Anne Hathaway home in England.

Brookings is the home of South Dakota State University, the state’s largest university, with 8100 students, and a staff of nearly 2000.

Rivers were the highways in settling the western territory. Lewis and Clark named American Creek when they passed through the Chamberlain – Oacoma area while exploring the territory for President Jefferson in 1804.

Henry Holland built an English-style mill in Milbank in 1886, three years before South Dakota became a state. Until 1907 it was used by settlers to grind wheat and corn and to saw wood.

The first and oldest Dakota daily newspaper, published in 1861 is the Yankton Daily Press & Dakotan.

The Meridian Bridge built in 1924 was the first structure built across the Missouri River in South Dakota.

The Prairie Rattlesnake is the only venomous snake native to South Dakota.

The U.S.S. South Dakota was the most decorated battleship during World War II. 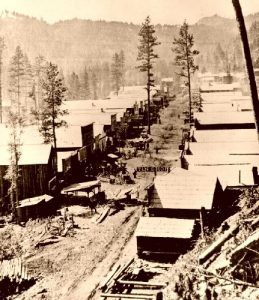 There are 39 State Parks and Recreation/Nature areas in South Dakota.

It has been estimated that 90% of women living in Deadwood, South Dakota in 1876 were prostitutes.

Newton Hills State Park, south of Canton, is part of a geological feature called the Coteau des Prairie. This narrow strip of rolling hills and forests was created by glaciers and extends along the eastern edge of South Dakota. At its highest point, the Coteau rises to more than 2,000 feet above sea level.

In South Dakota, prison inmates are required to pay for their incarceration costs if they do not have other financial obligations. Parents are responsible for juveniles.