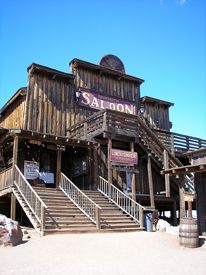 Decorating the Walls of Saloons

When America began its movement into the vast West, the saloon was right behind, or more likely, ever-present. Though places like Taos and Santa Fe, New Mexico already held a few Mexican cantinas, they were far and few between until the many saloons of the West began to sprout up wherever the pioneers established a settlement or where the trails crossed.

The first place that was actually called a “saloon” was at Brown’s Hole near the Wyoming–Colorado–Utah border. Established in 1822, Brown’s Saloon catered to the many trappers during the heavy fur trading days.

Saloons were ever popular in a place filled with soldiers, which included one of the West’s first saloons at Bent’s Fort, Colorado in the late 1820s; or with cowboys, such as in Dodge City, Kansas; and wherever miners scrabbled along rocks or canyons in search of their fortunes. When gold was discovered near Santa Barbara, California, in 1848, the settlement had but one cantina. However, just a few short years later, the town boasted more than 30 saloons. In 1883, Livingston, Montana, though it had only 3,000 residents, had 33  saloons.

Much like today’s bars, saloon walls were often filled with vendor posters and products, such as whiskey, beer, wine, cigars, and tobacco. Also commonly seen were posters for area productions, such as theater, musicians, Wild West Shows, circuses, and especially Burlesque. Paintings and prints of women, often barely clad, adorned the walls for the men’s entertainment. Also seen in many saloons were calendars and American flags.