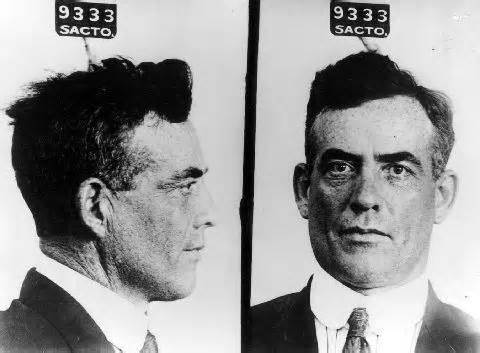 In the early 1920s, train robber and gunrunner Roy Gardner began his career of thievery in Arizona and California. Born in Trenton, Missouri, and raised in Colorado, Gardner would spend his early adulthood wandering the Southwest. At some point, he was married, and the couple had a daughter.

On April 16, 1920, the curly-headed young man stole $78,000 in cash and securities from a mail truck in San Diego, California. Though it was a smooth job, the outlaw was arrested just three days later. Soon his name would become as well known to the lawmen of California as Jesse James.

Sentenced to 25 years in McNeil Island Federal Penitentiary near Tacoma, Washington, Gardner vowed never to serve the sentence, even though no one had successfully escaped this high-security prison. On June 5, 1920, Gardner was going to Washington on a train to serve his sentence. When he and two other prisoners were being returned from the diner to their compartment, the outlaws attacked the guards and escaped.

On May 19, 1921, Gardner boarded the mail car of a Southern Pacific train, tied up the clerk, and fled the train in Roseville, California, with $187,000 in cash and securities.

Two days Gardner was arrested again while playing a game of cards in a Roseville, California pool hall. Attempting to reduce his long sentence, he offered to lead the lawmen to the money. However, he must have changed his mind when, after leading the officers on a wild goose chase of the surrounding hills, he announced, “I guess I have forgotten where I buried that money.”

Gardner was given an additional twenty-five years at McNeill’s Island, and on June 10, Deputy Marshals Mulhall and Rinckell set out from San Francisco with their prisoner. Gardner again vowed that he would not serve the sentence, and the very next night, just before the train was nearing the Portland, he managed to escape once again. However, he was soon recaptured when an alert hotel proprietor in Centralia, Washington, alerted the law.

This time a heavily ironed Gardner traveled to Tacoma, Washington, on June 17, 1921. Four miles long and two miles wide, McNeil’s Island, surrounded by an expanse of icy water and swift tidal currents, would make escape impossible — no one had ever managed it before.

However, on the afternoon of Labor Day, September 5, 1921, as Gardner watched a baseball game between two prison teams, he would again escape. Sitting between two fellow prisoners named Lawardus Bogart and Everett Impyn, Gardner suddenly said “Now” when a batter sent a ball far out into the center field. As the guards in the towers had their eyes on the ball and the runners, the three men crawled through a hole in the fence and were on the other side before they were spotted.

Making for a nearby pasture where they could shelter behind the livestock, bullets began to kick at their feet before they could reach the herd. Continuing to dash across the field toward the timber, Impyn was shot dead. When Gardner had almost reached the timber, a bullet tore through his left leg, and he went down. At almost the same time, he saw Bogart fall, waving weakly for him to go on.

Within ten minutes after the break, the prison sent guards to scour the beaches and confiscate every boat on the shoreline. As Gardner hid in the timber, darkness came and went, and at daybreak, he was still at liberty.

Warden Maloney believed there was no way that Gardner could have escaped the island, but as two more days passed and not a single trace of the Gardner could be found, he began to think differently.

Two more weeks passed, and the authorities had to admit the Gardner had probably gotten off the Island. Newspapers called him the “Smiling Bandit,” along with the “King of the Escape Artists.” Nothing more was heard from Gardner until November 3, 1921, when a lone bandit held up the Southern Pacific train at Maricopa, Arizona. Though nothing was taken, the mail clerk thought it was Gardner.

On November 15, 1921, Gardner attempted to hold up a mail train in Phoenix, Arizona, but the mail clerk was a powerful man and fought back. The gun was discharged, but no one was hit.

This time there would be no escape. Another twenty-five years were added to Gardner’s sentence, and he was taken to Leavenworth (Kansas) Federal Penitentiary but was later moved to the Atlanta Federal Prison. While there, he attempted yet another escape, but this one was unsuccessful, and he paid for it with twenty months in solitary confinement. 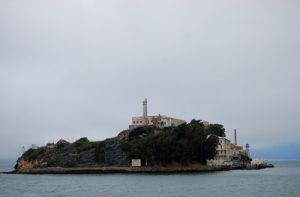 When he came out of the “hole,” he was crazy and ended up spending time in St. Elizabeth Hospital for the Insane at Washington, D. C., but was later removed to Alcatraz to complete his sentence. During his time in Alcatraz, his wife divorced him.

Gardner made several appeals for clemency but was not released until 1938.  In 1939, Gardner published his autobiography “Hellcatraz.” In January the following year, he ended his own life in a small hotel room in San Francisco, explaining that men who served more than five years in prison were doomed and that he was old and tired.

Thus ended a criminal career, and somewhere, an estimated $250,000 of his loot remains hidden. Gardner had neither the time nor the opportunity to spend his ill-gotten wealth nor partners to share it with. History remembers him as the last Great American Train Robber.

Legend has it that he hid some $16,000 in gold coins in the cone of an extinct volcano near Flagstaff, Arizona, before being captured during a train robbery in 1921. But, where is the rest? California? Washington? Or somewhere in between?