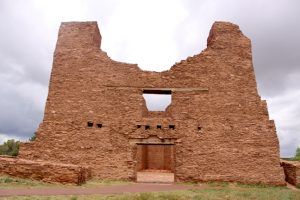 The Salinas Valley has been home to a variety of peoples and cultures for hundreds of years. As early as the 10th century,  Mogollon and Ancestral Puebloans tribes established pueblos in the valley that served as major centers of trade between the people of the Rio Grande region and the Plains Indian tribes.

Early Puebloan peoples moved into the Salinas Valley around the 1200 AD, and based on artifacts found at the site, began living at Quarai by about 1250. However, by about 1400, these people had moved on. Their descendants later moved back to the site before the Spanish initially made contact in the late 16th century. The Salinas Valley, was a rich, fertile area at the time, with several other pueblos existing nearby, including Tajique and Chililí. Tiwa speakers likely occupied all three of these pueblos. Neighboring Abó, Gran Quivira and Tabira were Tompiro-speaking communities. 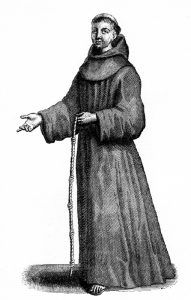 Although the Spanish visited the Salinas Valley and several of its pueblos as early as 1540, historical records officially place the Spanish missionaries at Quarai in 1626. The Spanish had already successfully established missions at Chililí and Abó. In December of 1625, the Fray Juan Gutiérrez de la Chica was sent to Quarai to initiate a new missionary effort. Upon his arrival, Gutiérrez reportedly met little resistance from the native population and soon began planning for a new church and convento.

Construction began on Nuestra Señora de la Purísima Concepción de Quarai in 1627, and continued until 1632. The ruins of the church that exists today show its basic plan as a Latin cross, about 108 feet long and 28 feet wide. The walls were all made of local red sandstone and average 4.5 feet in width — though many measure up to 10 feet at their bases in order to support the tall structure. Today, the wall ruins still stand roughly 20 feet tall, but it is likely the walls once towered around 40 feet. The red sandstone convento rooms surrounded a central plaza. Built at the same time as the church and convent, a square kiva is located inside the north convento of the mission and presents an interesting riddle. Kivas are an important part of many native religious practices. The kiva’s presence within the Spanish complex raises interesting questions about how traditional tribal religion intermingled with newly introduced Catholic traditions. 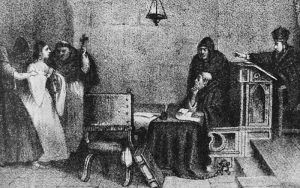 Hearing Before the Inquisition

In addition to the Catholic religion and customs, the Franciscan friars introduced new agricultural practices including domesticated herding animals. Extensive farming took place adjacent to the mission and on surrounding lands. The native population at Quarai struggled under the Spanish government-imposed encomienda system, which demanded annual agricultural payments to be made to Spanish soldiers in exchange for military protection. To meet those payments, the people at Quarai began herding sheep and some cattle. As the Spanish demanded more of their labor, native people’s consumption of wild plant foods became less diverse and hunting wild game decreased during the colonial period. 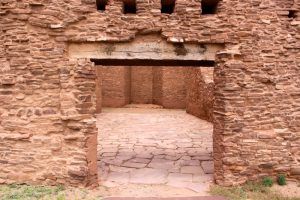 At its peak, the Quarai pueblo had approximately 1,000 rooms and housed between 600 and 700 residents of both native and Spanish descent. The pueblo buildings were arranged around a number of small plazas. In addition to the Catholic religion and customs, the Franciscan friars introduced new agricultural and production methods. Extensive farming took place adjacent to the mission and on surrounding lands. Still, the native population at Quarai struggled under the Spanish government-imposed encomienda system – one which demanded annual agricultural payments be made to Spanish soldiers in exchange for military protection.

By the early 1670s, a series of droughts, Apache attacks, and unrest within the Spanish government, eventually led to the abandonment of Quarai. Native inhabitants are believed to have fled and joined their linguistic kinsmen along the Rio Grande. By 1678, all of the Salinas Valley pueblos and their missions had met the same fate, leaving only empty buildings, pottery shards, other artifacts behind for later excavation and interpretation.

Much later, in the early 1800s, settlers would return to Quarai, constructing the Lucero Structures including a defensive Torreon and the later Manzano Church. In the early 1820s, Miguel and Juan Lucero and their families were the first to move back to Quarai, at which time the Quarai church and convento were still in fair condition. They lived in the rooms of the convento, patching walls and fixing remaining roofs. Later, rooms were added, and new houses were built from the mission rubble. However, around 1830, the Apache began to raid the area and burned the Quarai church and convento, causing the remaining roof to collapse, and destroying much of what the Lucero family had built. This led to the second abandonment of Quarai. 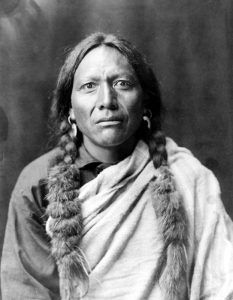 Some of the Lucero family returned in the 1840s constructing new structures including a torreon southeast of the mission. Miguel Lucero sold the land to Bernabe Salas in 1872, but this was short-lived as Salas abandoned the Lucero structures and moved to the nearby town of Punta de Agua by 1882. The remains of these structures are still visible today along the Quarai interpretive trail.

Since 1913, a number of studies and excavations have taken place at Quarai and in the early 1930s, the site became a New Mexico State Monument. The ruins were taken over by the National Park Service in the 1980s. Though Quarai has been excavated and stabilized, much of the original ancient village and the 17th-century pueblo remain buried today.

However, visitors to the site today will note the impressive, stabilized mission ruins standing against the landscape. A self-guided trail takes those who want to explore the church and the 17th-century pueblo. The historic landmark contains interpretive signs, and a visitor center and small museum stand nearby to help guests understand this important American Indian and Spanish heritage site.

Access to the site of the ruins and the pueblo is through the Salinas Pueblo Missions National Monument, which offers interpreted tours and self-guided walks through the ruins of Quarai and through Abó and Gran Quivira. 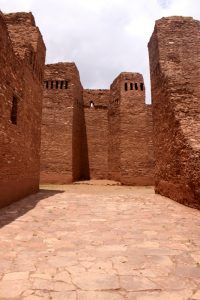