Sayre, Oklahoma, the county seat of Beckham County, was named for Robert H. Sayre, a stockholder of the railroad. Getting its start in 1901, when the steam engine pushed through, Sayre was primarily dependent upon local livestock and farming. However, this all changed when rich oil and gas fields were found in the area, and Sayre began to grow. 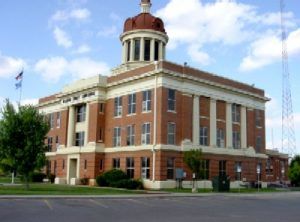 When The Grapes of Wrath was filmed, the Beckham County courthouse, built in 1911, made a thirty-second appearance in the final cut of the movie.

Route 66 meanders through Sayre providing many views of the Mother Road era as well as historic buildings dating back to the town’s founding in 1901.

Many of these old buildings are currently being enthusiastically refurbished as Sayer’s entire historic downtown district, centered on Main and 4th Streets, was listed on the National Register of Historic Places, as well as the Oklahoma Register, in 2002.

Here in the downtown district, you will not only see Sayre’s historic courthouse looming over the east end of Main Street but also the old Owl Drug Store, where travelers could get a great milkshake in the not so distant past, as well as the old Stovall Theater, which has seen many a year pass since projecting a movie upon its widescreen. Running underground, at the center of 4th and Elm Streets is a walkway that once served to keep pedestrians safe when Route 66 was congested with traffic.

Watch for several murals on the buildings, including the one on the art deco post office. Along the way, you will see the Western Motel, which still caters to Route 66 travelers. Other points of interest include the Sayre Park with its WPA constructed rock swimming pool, the RS&K Railroad museum, and the Old Hotel Bed & Breakfast.

Not far to the east of Sayre is an ancient “Buffalo Kill Site” dating from 300. B.C. that has become part of an archeological dig by the University of Oklahoma. This important piece of history can be seen when visiting the Winery Flying W Guest Ranch, where trail rides and wagon rides transport you back in time.

Westward for a few miles, there are weed-covered sand dunes and patches of gnarled dwarf trees; then the highway descends into a valley where there is more vegetation, although most of the land is uncultivated. 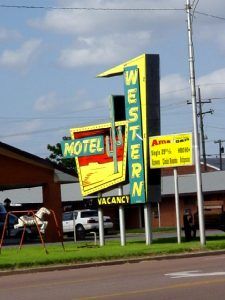 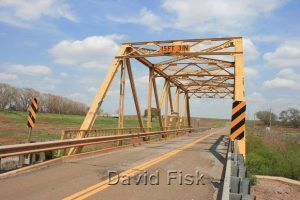 The historic Timber Creek through truss bridge near Sayre Oklahoma was built in 1926. Photo by David Fisk.