About 900 years ago, Native American people lived in Tijeras Canyon villages, some of which were still occupied when the Spanish arrived. Right in the center of the canyon once stood the Tijeras Pueblo. Established in about 1300 A.D., the adobe structure housed about 400 people who are believed to have been part of an overall migration of inhabitants from the Four Corners region. The structure, encompassing some 200 rooms, was arranged in a large U-shape. By the middle of the 14th century, the people had left and the pueblo was falling into ruin. About 1390, another group of Native Americans inhabited the site and rebuilt the pueblo on a smaller scale. They, too, didn’t stay long, as, by 1425, it was permanently abandoned, most likely due to drought in the Rio Grande Valley. Today, all that remains of the old pueblo is a grass-covered mound located directly behind the Sandia Ranger Station. A self-guided tour can be taken any time during daylight hours (stop at the Ranger Station for directions.)

“Tijeras,” meaning “scissors” in Spanish comes from the fact that the pueblo was on the crossroads of two major trade routes, one extending from Mexico City to Santa Fe, and the other from the Great Plains to the Pacific Ocean.

After the pueblo dwellers, Apache Indians used the Canyon as a passage and campground when they rode west to raid communities along the Rio Grande. Later the Comanche also utilized the canyon as a staging area to discourage settlers in the area.

However, in 1763 the Spanish government provided land ownership incentives to those willing to homestead the area. Hispanic settlers, primarily from Albuquerque, came to the canyon, but in 1770 an Apache attack drove the settlers back to Albuquerque, though they often traveled to the canyon for timber and hunting. In the early 1800s attempts to settle the area were more successful despite sporadic Indian raids that continued into the mid-1860s.

Before the Civil War, the Canyon was used in transporting information and military supplies between Albuquerque and Fort Stanton. During the war, both Confederate and Union armies occupied it, but no battles took place in the canyon.

In 1868, more than 6,000 Navajo traveled from Ft. Sumner, where they had lived in detention for more than four years, north to Sedillo and then west through the Canyon.

In about 1880, a village called Tijeras was established at the crossing of the Manzano and Sandia mountains. It originally was called home to 15 families who primarily worked at farming and ranching. There were also some small mining activities in the canyon.

Once the area was successfully settled, area residents needed a church, which began in a resident’s home in 1870. It later sold to a Mrs. Jessie

Keleher, who donated the building for use as the Immaculate Conception Church in 1912, with the stipulation that it be maintained as a church. In 1930 the church the building and property were returned to the Keleher family. About five years later, it became a church once again and renamed Santo Niño (Holy Child). Eventually, the church, which is on the National Register of Historic Places, was given to the Village of Tijeras. It is located on the west side of Route 66 just south of the Tijeras Library and is utilized as a community events center. 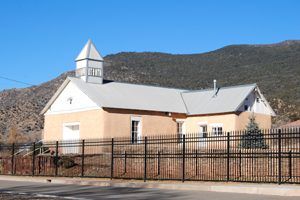 When Route 66 was first established in 1926, it didn’t originally pass through the canyon. But, when the Mother Road was shortened and realigned through the area, it followed US 470, which linked Albuquerque with Moriarty. However, the road soon became too crowded and unsafe, especially along a dangerously sharp, blind turn known as “Dead Man’s Curve”. In the early 1950s, the road began to be rebuilt as a four-lane highway and as the largest road project ever taken on in the State of New Mexico at the time. During the drilling, dynamiting, and dirt-moving, a caravan of about 15 cars full of hired union men showed up to slow down the work. Commonly known as hired “goons,” they protested “Our men are on strike!” However, the road builders and contractors of New Mexico were not part of the union. Day after day for almost two months, the goons tried unsuccessfully to delay the work and intimidate the employees. Finally, the goons disbanded and the union never succeeded in “organizing” the road crews and contractors in New Mexico. In 1951 it was finally completed. In 1965, Tijeras Canyon would be bypassed when I-40 was built through the area.

The village of Tijeras, situated within the boundaries of the Cibola National Forest, is the southern gateway to the Turquoise Trail Scenic Byway that travels to Santa Fe. Along the trail are unique towns, a number of museums and recreational opportunities where prehistoric peoples once made their homes. In Tijeras is one of the Cibola National Forest’s Visitors Centers as well as the Talking Talons Leadership Center & Living Conservation Museum. Today, Tijeras is home to nearly 600 residents and growing.